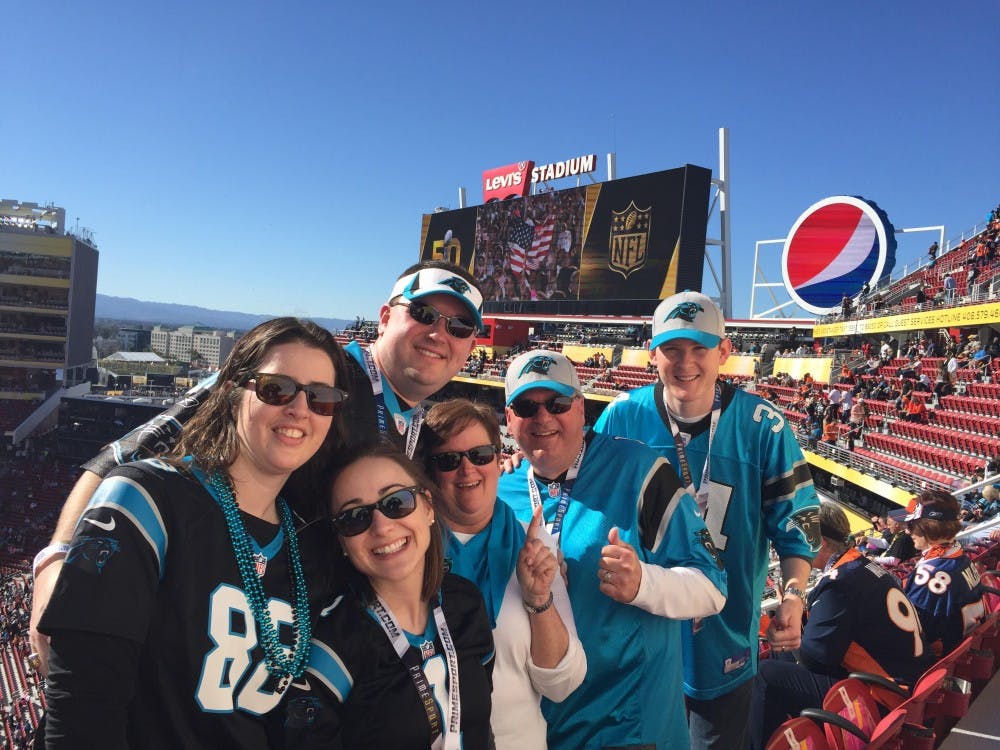 Powell enjoys trip to Santa Clara, California and cheers on the Panthers with his friends and family. Photo submitted by Will Powell.

He sits at his desk the day before flying out to the Super Bowl and talks about his favorite memories with relative ease. One question appears to stump him, though: What would go through your mind if the Panthers won the Super Bowl?

Will Powell, Elon University’s director of ticket operations, looks around his office searching for the right words.

On Super Bowl Sunday, Powell was seated in Section 310 of Levi’s Stadium in Santa Clara, California along the corner of the end zone, gazing onto the field as the waning seconds ticked off the clock. The confetti cannons boomed. Thousands of fans cheered all around him.

But disappointment swept across his face. The Denver Broncos defeated the Carolina Panthers 24-10.

“This team is led by so many people and they’re so calm under very big pressure spots that I’ve never expected to see,” Powell said of the Panthers before the Super Bowl.

Yet in the game that mattered most, the Panthers were their own worst enemies.

A combination of unfortunate calls, tremendous Denver defense and Carolina turnovers proved costly in the 24-10 loss.

While the vast majority of Elon students do not come from North Carolina, the Panthers have become the sports team of choice for many of them.

Sophomore Max Herrera was born and raised in California. Though he’s an Indianapolis Colts fan and Peyton Manning supporter, he has become an adopted Panthers fan.

“I definitely root for the Panthers much more than I did before coming to Elon,” Herrera said.

Though the loss is disappointing for newly created fans, it is particularly difficult for lifetime ones from the Tar Heel State.

Walking across campus in a Panthers sweater the day after the Super Bowl, sophomore Dustin Farris remained faithful to his hometown team despite the disappointing end to an otherwise stellar season.

“Last night was kind of hard, but I love the team and will stay with them,” Farris said.

The Panthers’ Super Bowl loss hurts even deeper for fans like Powell who have followed the team since it first played in 1995.

When Powell was 9, the Carolina Panthers joined the NFL. From that point forward, the North Carolina native never looked back.

“If you want to put it from ’95 on, I’ve been a huge fan,” Powell said. “I’ve been through the ups and the downs and everything else, but being born in North Carolina helps a lot. I’ve always had access to the games.”

In the 1996 season — the Panthers’ second year as a franchise — Powell saw his team advance to the NFC Championship. In 2004, he traveled to Houston to watch the Panthers square off against the New England Patriots in Super Bowl XXXVIII.

Led by QB Jake Delhomme, Carolina lost 32-29 in as Patriots kicker Adam Vinatieri made a 41-yard field goal with four seconds left in the game.

Despite the loss, Powell was proud of his team for completely revitalizing itself after going 1-15 just two seasons earlier.

“When you’re a longtime fan, you get to see that progression through time,” Powell said.

Carolina finished the 2015 season 15-2 and won its first 14 regular season games. The Panthers beat the Seattle Seahawks 31-24 in the NFC Divisional Playoff game and pummeled the Arizona Cardinals 49-15 in the NFC Championship game. In doing so, the team earned widespread respect.

Powell said the Panthers’ 2015 season was similar to 2003 in that expectations were not too high. Though he imagined making the playoffs, he didn’t envision the Panthers advancing to the Super Bowl.

While Powell did not get the outcome he had hoped for, he recognizes how well his team has played throughout the course of the season and how much entertainment the players have provided.

From Newton’s showmanship to his iconic dab to players giving touchdown balls to kids seated in the first row, the Carolina Panthers have energized the national football community.

“They’re showboating,” Powell said. “They’re having fun. They’re pounding these guys into the ground and then they’re getting up and doing the dab and things like that, and the people love it. For me, that’s what football is all about.”