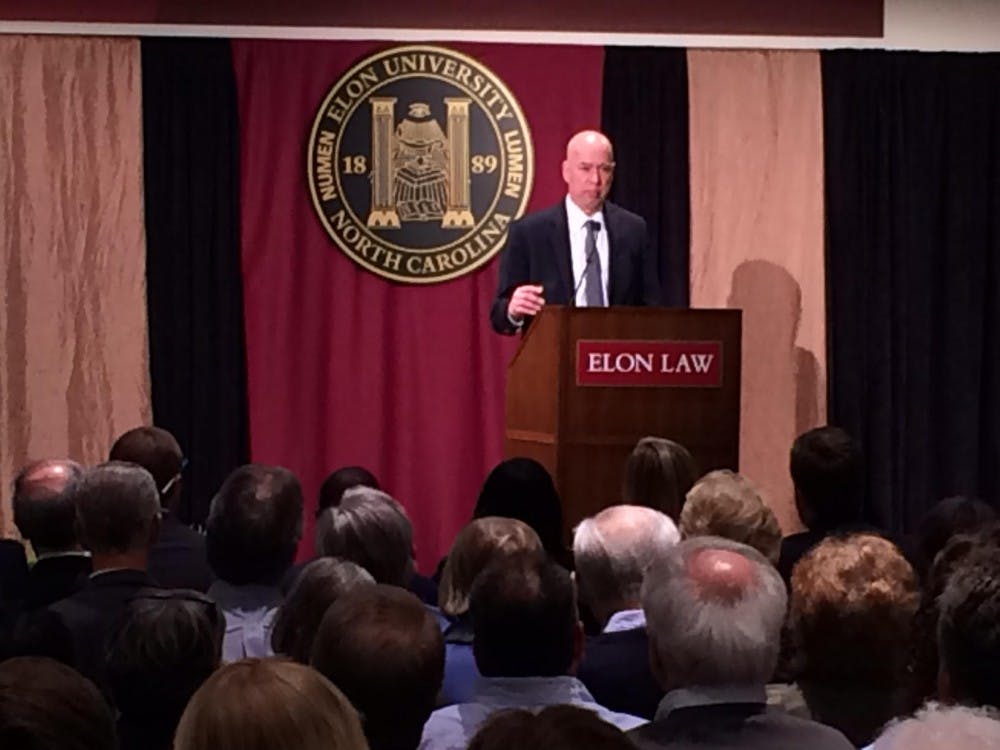 Scurrying to file the story half an hour before his lecture and rushing to a computer after the event to continue writing about the decision, Liptak leads a busy life in the 24-hour news cycle.

“The challenges of [covering] the Court are enormous and have only gotten worse,” Liptak said.

As part of the Elon Law Distinguished Leadership Lecture Series presented by the Joseph M. Bryan Foundation, Liptak spoke about the journalistic challenges he encounters on a regular basis and explained the current state of the Supreme Court.

One of the more pressing issues he addressed was the ever-growing politicization of appointing Supreme Court justices.

He explained how former President Gerald Ford appointed John Paul Stevens onto the Court in 1975 because of Stevens' qualifications.

But over time, Liptak said he has noticed a trend of presidents appointing justices whose beliefs align with their political agenda.

"Presidents have seemed to unlock the key to make sure the justices vote the way they want them to," he said.

"The justices like to say that they're above politics and I like to believe them when I can," Liptak said. "But some of the evidence seems to point in the other direction."

Video Clip: Liptak shares thoughts on the current state of the Supreme Court and discusses important issues the public should keeps its eyes out for in the near future.

As the lecture progressed, Liptak offered perspective on common complains of the judicial process.

Of the 70 or so cases the Supreme Court hears each year, he said 60 of them are trivial. He also explained the lack of diversity within the Supreme Court. Though three of the nine justices are women, Liptak said the justices could still be considered homogenous since they came from privileged universities such as Harvard and Yale.

During the question and answer portion of the event, he addressed some important issues many U.S. residents have expressed to him in the past.

In the 2016 presidential election, Sen. Bernie Sanders (I-Vt.) has often complained about the Supreme Court's decision in Citizens United v. Federal Election Commission that prohibited government from restricting independent political expenditures by a nonprofit corporation. When one audience member asked if Liptak envisioned the ruling being overturned, Liptak said a simple constitutional ruling would not be enough.

Another important issue raised was the death penalty. According to Liptak, the idea of eliminating the death penalty has received too much attention from media outlets and the general public.

He later said part of the challenge he faces as a journalist is directing his audience's focus to important issues and making his stories easy to read for people who don't practice law.

“There comes to be an inverse relationship between quality of product and readership," he said.

Video Clip: Liptak speaks at Elon Law. Some of the highlights are shown above.