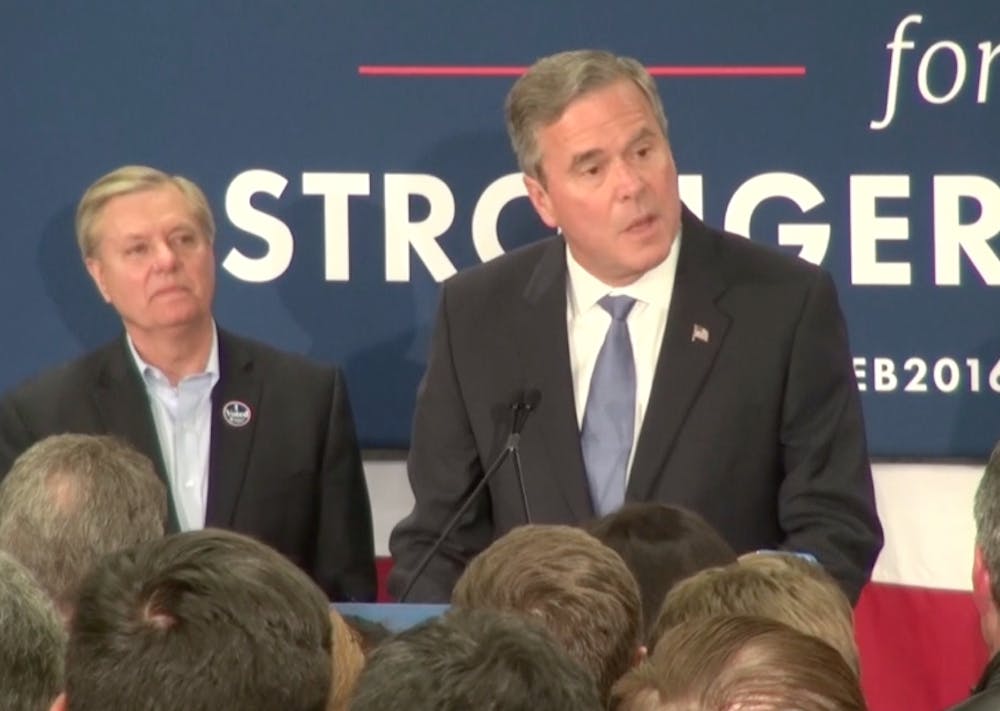 "Tonight I am suspending my campaign," Bush told a crowd of supporters at his primary watch party in Columbia, South Carolina.

"The people of Iowa and New Hampshire and South Carolina have spoken, and I really respect their decision," he said, referencing his disappointing finish in the early voting states. "I'm proud of the campaign that we've run to unify our country."

Bush finished the night with 8 percent of the vote, behind Donald Trump with 33 percent, Marco Rubio, R-Fl, with 23 percent and Sen. Ted Cruz, R-Tx, with 22 percent. Ohio Governor John Kasich and Dr. Ben Carson finished behind Bush with 8 percent and 7 percent respectively.

After making his announcement, Bush pushed the crowd to continue to support conservative policies.

"Every day Americans test the boundaries of freedom and achieve more than what they could have ever dreamed, but over the last seven years our nation's bright light has become little more than a flicker," Bush said.

"The American values that have brought peace and opportunity are fading. That is not the America we know and love. America is a country that thinks big, acts boldly and leads without apology. It will be up to the next president to restore that kind of leadership."

Bush had tears in his eyes as he left the stage, thanking volunteers for their support.

Former 2016 Republican candidate, Sen. Lindsey Graham of South Carolina, who dropped out of the race and endorsed Bush last year, was at the event lending his support.

"To those who helped Jeb Bush and worked so hard on his behalf in South Carolina and throughout the country, thank you very much," Graham said. "Thank you Jeb, for being one of the most decent, thoughtful men I've ever met."

After coming into the race as the frontrunner in July 2015, Bush failed to appeal to Republican voters who were tired of the Washington establishment. Opponents successfully compared him to his father and his brother, Pres. George H. W. Bush and Pres. George W. Bush, and said that electing Bush would lead to much of the same.

Bush withdrawing from the race presents Sen. Marco Rubio, who finished second in the South Carolina Primary, with an opportunity to take his former mentor's support and solidify his standing as the Republican establishment's candidate of choice.

The remaining Republican candidates will now head to Nevada to campaign for the Feb. 23 caucuses.