Examining Election 2016 contributions: Clinton, Carson at top of the pack 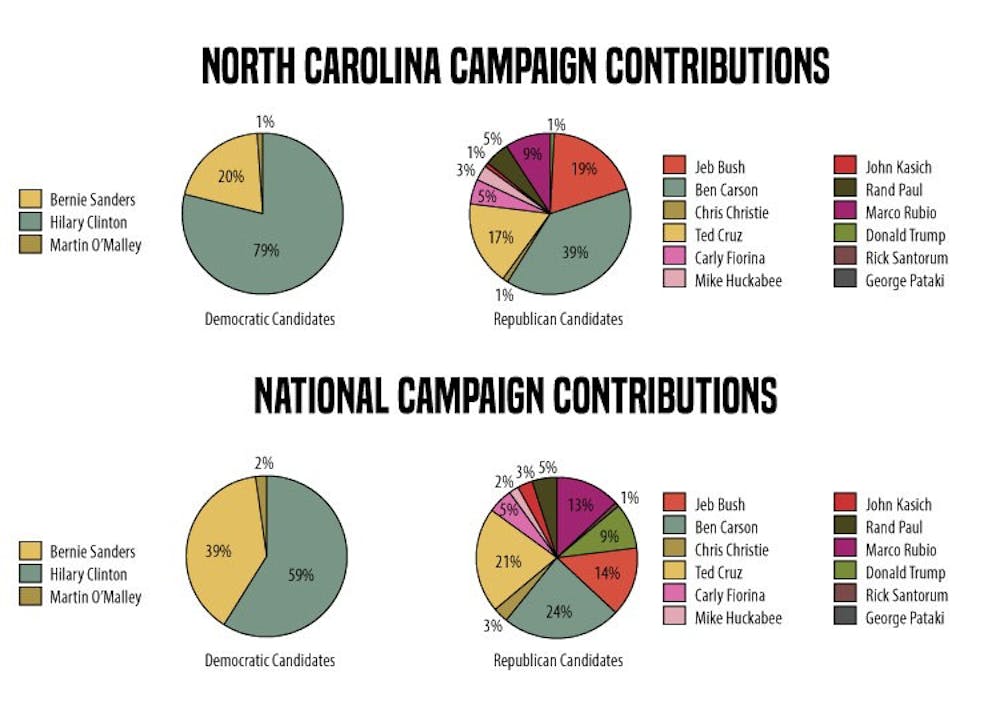 In each election cycle, candidates are required to provide reports to the FEC highlighting their campaign spending and campaign contributions received. With 2016 underway and votes already cast in the Iowa caucuses, the year-end reports come at a particularly revealing time.

Of the 12 presidential candidates — 10 Republicans and two Democrats — Clinton leads the pack with $1.2 million in individual contributions received from the Tar Heel State during 2015.

Carson is Clinton’s closest competitor, with more than $930,000. The gap widens for the remaining 10 candidates, with next-biggest contribution earner former Gov. Jeb Bush (R-Fla.) bringing in about $450,000.

But the most revealing statistic from the year-end report might be the huge gap between Clinton and Sen. Bernie Sanders (I-Vt.) in North Carolina. Sanders earned about $300,000 — nearly four times less than Clinton.

The race for first in total contributions across all states within the Democratic Party is much tighter.

Clinton earned the most from individual donors with $112 million, while Sanders ranked second with $74.3 million. Former Maryland Gov. Martin O’Malley (R-Md.), now no longer a contender for the nomination, was well behind with just $4.7 million.

While the figures mentioned above highlight totals for campaign contributions, it is important to understand the source of the contributions.

Other candidates have relied more on smaller contributions. Eighty-five percent of Sanders’ total receipts have totaled no more than $200.

But not all candidates are looking for funding from the general public.

During a Jan. 28 rally at Drake University in Des Moines, Iowa, Donald Trump bragged about funding his own campaign and turning down $1 million from some of his friends, including businessman Phil Ruffin.

“Being No. 1, [wealthy donors] all want to control you,” Trump said during the rally.

He added that several of his competitors, especially Bush, would be influenced by their contributors if elected president.

Candidates still in the race by the end of March will file a quarterly report to the FEC April 15.