Elon University looks to source its food locally from nearby vendors.

As he reflects today on the old days of mystery meat nights with little-to-no options for students, he can’t help but think positively on how far the university has come in the last several decades. Elon has since added Biscuitville, Chick-fil-A, Green World and several other facilities to meet the increasing demands of an ever-growing student population.

But while dining options have improved over the course of time, there is still substantial progress that can be made in the local food movement.

“We’re really focusing on making that experience in the dining hall the best,” Fulkerson said. “It started 20-25 years ago and it keeps getting better.”

Elon Dining lists “Buying Locally” in bold at the top of its sustainability web page.

But the word “local” has a pretty broad meaning in the context of Elon Dining. According to Heather Krieger, marketing coordinator for Aramark, local is defined for tracking purposes within 250 miles of Elon’s campus.

As part of Dining Services’ commitment to buying local, it is a member of the “North Carolina 10% Campaign!” 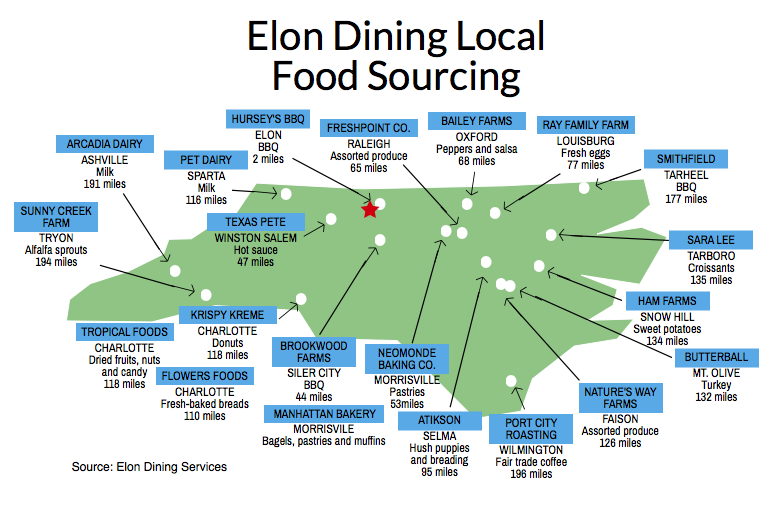 “We pledge to purchase 10 percent of our items from North Carolina,” Krieger said.

While Elon Dining notes on its sustainability page that it purchased more than 11 percent of its food locally last year, there was no mention of where the 11 percent of food came from.

“Everyone has a different idea of what is local,” Krieger said. “We try to abide by that 250 [miles], but then it’s within the state or within the region. If we can’t get it there, then we have to go outside of our local range. What we track and promote is usually within that 250-mile radius of campus.”

With the word “local” defined as a 250-mile radius, food can and does come from parts of Virginia, South Carolina, West Virginia, Tennessee and Kentucky.

Dining Services’ map “From Local Farms to Your Forks” reveals 21 different sources of food in North Carolina. Of those 21 locations, only one is located in Alamance County and only three are located within a 50-mile radius of campus.

In order to further understand the mission to buy locally, it is important to first distinguish between Elon University and Elon Dining.

According to Fulkerson, Elon Dining has three primary responsibilities: (1) employees and training (2) food safety and insurance (3) food purchase and preparation.

But while Elon Dining oversees the purchasing of food from vendors, Elon University assumes other roles.

Elon University itself is not directly involved in the final decision-making process for bringing national vendors to campus. Rather, Elon Dining, which is overseen by Aramark, makes final calls.

In a 10-page Vendor Policy Committee Report, the university outlined its limited influence in deciding which vendors come to campus.

“The university provides the facilities for Aramark’s operations on campus and participates indirectly in the decision-making process around national vendors that operate on campus,” said a portion of the report.

Fulkerson explained how the university recommended Aramark add a Biscuitville location to campus because the founders had an existing relationship with Elon. But it took five to six years for Biscuitville to finally arrive on campus.

Though Elon makes recommendations for large vendors, its limited influence creates a lengthy process for local businesses to come to campus.

While multiple requests for statistics about meal plans from The Pendulum went unanswered by Elon Dining, one request to the university was returned successfully.

“Elon Dining is run by Aramark, but we do have some control over them,” Fulkerson said. “They are a corporation and corporations don’t like giving out their information.”

In fall 2013, 34 percent of the 3,903 total students on meal plans were on “All Access + 7,” which includes unlimited visits to all dining halls, seven meal exchanges per week and 20 free guest meals per year.

Carrie Ryan, Elon’s associate director for administrative services for the last five years, said this shift has resulted from the additions of new retail dining options.

“You’ll see more ‘Blocks’ at certain points and more ‘All-Access’ as we add locations like Einstein’s and Qdoba,” Ryan said.

As the +7 option becomes an increasingly popular choice for students, other options decline in popularity.

The “All Access-Basic” plan, which includes unlimited access to all dining halls and 10 free guest meals per year, has declined by 24 percent within the past three fall semesters.

This decline may reflect a growing dissatisfaction with the four dining hall locations.

Between limited hours of operation — many dining halls often close by 10 p.m. and brunch is unavailable before 10 a.m. on the weekends — along with the variety of off-campus and retail locations, Elon University is looking to make some changes.

One of those changes includes renovating McEwen Dining Hall.

“McEwen’s older, their numbers are way down and we need to refurbish that,” Fulkerson said. “It hasn’t been refurbished in about 25 years, so it’s time to look at that and we’re working on that one right now.”

As Elon looks to maximize use of its dining halls and appeal to students, there are several obstacles that lie ahead, particularly in the local food movement.

Krieger said Elon Dining is committed to sourcing produce locally whenever possible, but the logistics can be challenging given the large student population on meal plans and the various health and safety guidelines Aramark must adhere to.

“I have students approach me and say, ‘We have a farmers market right down the corner. Why can’t we buy from the farmers market?’” Krieger said. “And I say, ‘With a farmers market, if Elon Dining bought all of it, it would feed one dining hall during one meal period.’”

She also mentioned the extensive process in place for the existing distributors and acquiring additional distributors. According to Krieger, Elon Dining has middlemen who work through that process.

Ryan added there are struggles in buying from nearby vendors because of the growing season in North Carolina and the extensive process it takes for vendors to be approved to serve their products through Aramark and through the government.

“We do have some local farms, but they can’t meet our needs,” Ryan said. “They can’t produce enough, keep up with the demand and always guarantee the safety levels that a corporation requires.”

Ryan emphasized the importance of safety and how precautions in place limit the involvement of the surrounding community.

“Our primary goal as a university and Elon Dining is to make sure everyone is safe,” Ryan said. “Yeah, we can go buy cheese at a farm down the street. Lots of places do. But there’s a risk there and we don’t want the students getting sick.”

Outside of the “North Carolina 10% Campaign,” Elon goes through Sustainability Tracking, Assessment & Rating System (STARS) every two years. Ryan estimates the university only buys 4 percent of food products locally under the strict definitions set by and certifications required by STARS.

Understanding the expenses of eating at Elon

The majority of students have an “All Access-Basic” plan or higher, which costs at least $2,470. This can largely be explained by the requirement for students living in residence halls to have at least a basic plan.

Students who live off-campus often decide to go for “Block” plans. If the cost of the “200 Block” is broken down with the meal dollars removed from the total cost, each meal costs $11.65. Each meal under a “Block 300” amounts to $10.51 using the same model for calculation.

Given that the most expensive price for a meal in a dining hall is $11.35, going on a meal plan carries little financial reward for those who are on the plan.

While the university recognizes the cost is high, it insists the values of convenience for those on block plans and the unlimited supply of food under “All Access-Basic,” + 7 and +14 plans works in the students’ best interest.

Ryan said she looks at the cost per meal every year to help evaluate how cost-effective plans are for students. She added that the university begins re-evaluating meal plans about every five to seven years.

“There’s a lot that goes into that re-evaluation process because you’ve got to do research, look at what other schools are doing, you’ve got to make sure the finances work for the university as well as the finances for Aramark,” Ryan said.

Ryan and Fulkerson said they also do walkthroughs of facilities and eat regularly on campus in order to stay aware of the changes needed for Elon Dining.