Dikkers to students: "Find out what you love to do and do it without reservation." 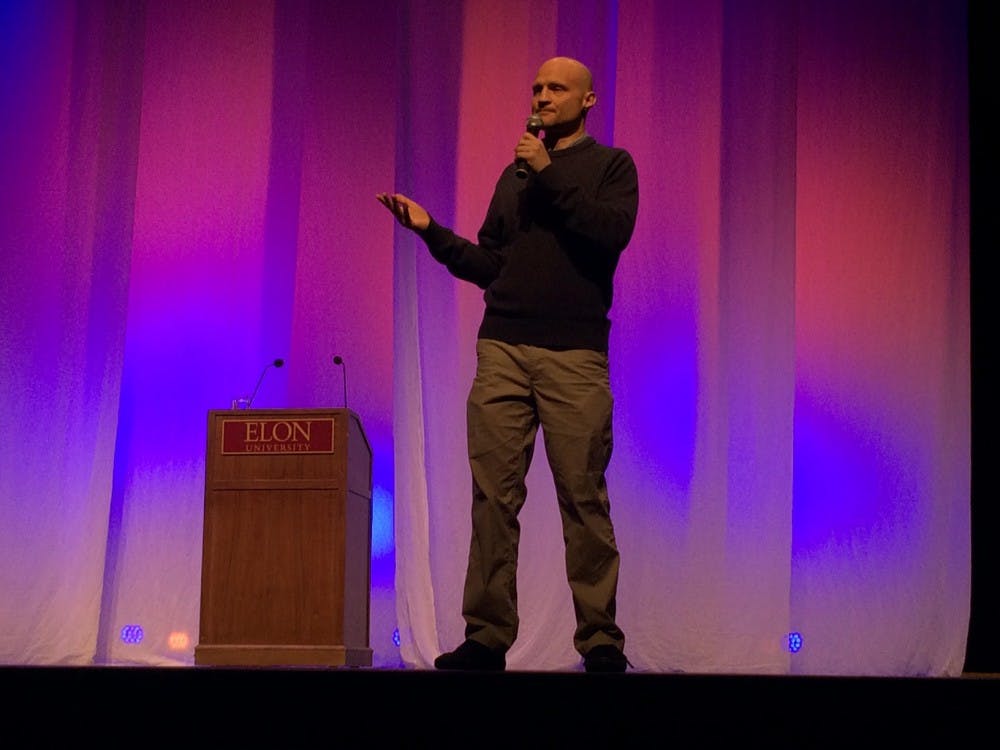 Scott Dikkers, founding editor of The Onion, has often used humor writing as a coping mechanism. From being homeless to getting bullied to his parents getting divorced, comedy has been the much-needed presence for him in the wake of personal hardships.

As he developed the world-renown satirical “news” outlet, he actively sought out writers who were smart, bitter and had no prospects in life.

Dikkers visited Elon University Tuesday night to share his experiences and offer students tips for success and advice for becoming strong leaders. During the event, “The Funny Story Behind the Funny Stories,” held in McCrary Theatre, Dikkers encouraged students to surround themselves with positive influencers.

“The goal is to eventually surround yourself with a team that’s better and smarter than you,” Dikkers said. “The only drawback to that plan is you become the dumbest person in your company. But that is the secret to cultivating top players in your company.”

The Onion began as a comic strip in 1988 in Madison, Wisconsin, and was founded by University of Wisconsin students Tim Keck and Christopher Johnson. Dikkers worked as the first person on payroll, earning $60 a week for his comics. Shortly thereafter, Keck and Johnson left the business to pursue other ventures and sold a large chunk of the company to Dikkers for just $3,000.

Though Dikkers essentially started a company from scratch, he worked relentlessly to find talented writers in unlikely places.

When starting The Onion, Dikkers said he looked for writers similar to himself who had turned to comedy as a defense mechanism. He described his early staff members as depressed and insecure. But as time progressed and Dikkers adapted a more hands-off leadership approach, he found his writers perform better when granted more freedom.

As he surrounded himself with strong people, he honed his skills for satirical writing by using his childhood struggles as a motivating force for future success.

Dikkers grew up in a family with little sense of humor, but he gained much satisfaction in being a class clown.

“The main thing I learned in school was humor was a wonderful coping mechanism,” he said.

When asked if success motivated him to look for additional sources of inspiration, Dikkers replied his difficult childhood was all he needed.

“Childhood is a rocket fuel that will keep you going ‘til the day you die,” he said.

When The Onion began to gain traction in the late 1990s and early 2000s, Dikkers reminded those in attendance that he did not benefit too much financially because he put everything he earned back into the business.

The Onion was getting to the point where it was almost becoming a household name,” he said. “Because I was an owner and I didn’t take a salary, I became homeless.”

Dikkers shared how he was involved in the Big Brothers program as a mentor but was pitied by his younger brother’s family. The family even offered him a mattress that their dog eventually peed on.

But the living conditions were of little importance to Dikkers. He simply wanted to bring a smile to readers’ faces and brighten the world as best as he could.

Video Clip: Dikkers talks about humorous stories that The Onion has published.

After the governor’s press secretary demanded a retraction in the next edition of The Onion, Dikkers’ team delivered a more provocative piece.

During the question and answer portion of the event, Dikkers said The Onion walks a fine line between humor and fairness. Though stories might often be considered inappropriate to the general public, he claimed the story was good to publish if it was fair.

“You can make a joke about any subject as long as you’re targeting responsibly,” Dikkers said.

Dikkers urged students to adhere to what he considers to be the five most important principles of leadership: (1) live your mission; (2) invest your passion, not your money; (3) be prepared to scrap everything; (4) trust your people; (5) work right.

“Find out what you love to do and do it without reservation,” Dikkers said. “Go all in.”