Slew of protests emerge at Donald Trump rally in Radford 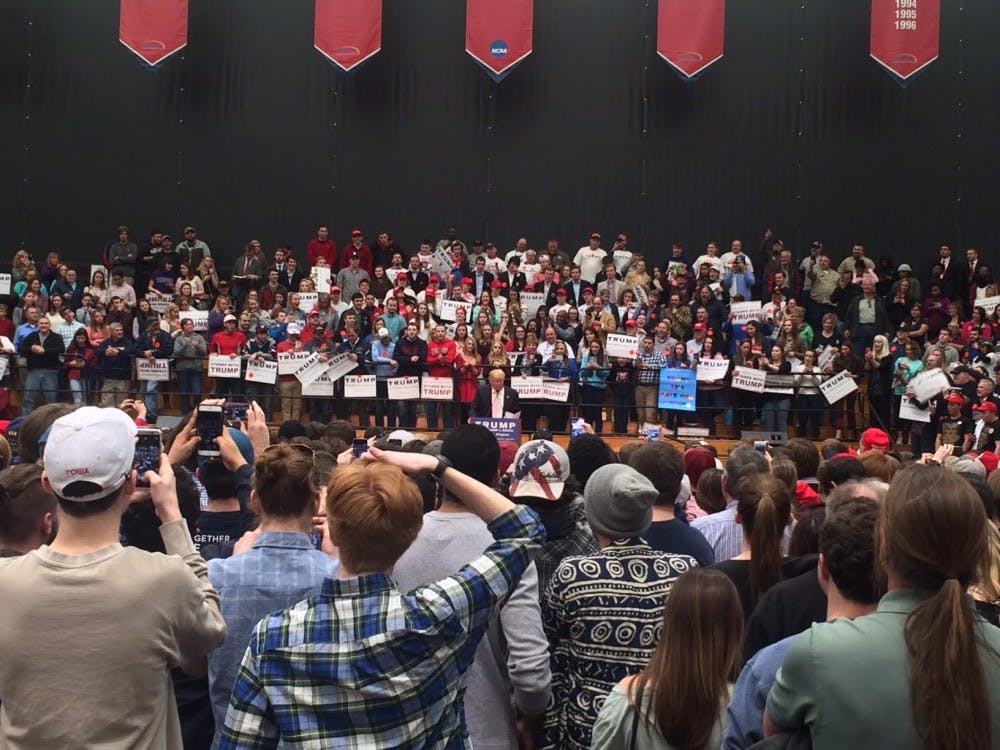 But while he stuck to his usual issues of heightening border security, erasing trade imbalance with other countries and reducing the national debt, one subject proved particularly salient: suppression of media misinformation.

“I’m dealing with some real sleazebags up here,” Trump said. “I think the press is worse. They’re worse than the politicians.”

Trump then said he would open up libel laws to prevent members of the media from lying to the general public. Shortly thereafter, a slew of protests erupted.

Nearly 50 Black Lives Matter protesters locked hands and chanted as loud as they could. After about two minutes of delay, officers at the event escorted protesters out of the building.

As TIME Magazine Photographer Christopher Morris rushed to take a photograph of the protesters while they were leaving, he stepped outside the area restricted to the press.

Chris Morris gets thrown out after pushing a member of security to fight for positioning to take a photo. pic.twitter.com/EnoAiOYQ4H

“I stepped 18 inches out of the pen, and they grabbed me by the neck and started choking me and slamming me to the ground,” Morris said after the event.

As Morris and Black Lives Matter protesters were being escorted out of Dedmon Center, Trump’s supporters began chanting, “All lives matter.”

Trump then blamed the protests on the divisiveness President Barack Obama has brought to the United States.

“The hatred is so unbelievable, and we’ve got to come together as a country,” Trump said. “We’ve got to love each other.”

Despite the many protests, Trump did not deviate from his main talking points.

Trump also denounced former Mexican President Vicente Fox for using an expletive when saying there was no chance Mexico would pay for a 1,000-mile wall on the U.S.-Mexico border.

In response to Fox’s statement, Trump said the wall would be 10 feet higher than he had originally proposed.

On the issue of maintaining strong foreign relationships, Trump said he would be much firmer than Obama in handling China and Mexico.

“I like China,” Trump said. “I like Mexico. I want smart leadership in our country. Our country is being killed because we have stupid people.”

He explained the United States is expected to lose more than $500 billion to China in 2016 alone. He also cited a $58 billion trade imbalance with Mexico as a reason for stronger negotiation tactics.

Trump said the Obama administration has used “political hacks” to negotiate deals. As a result, the U.S. economy has grown stagnant.

He noted college students in particular have struggled since Obama took office.

He asked Radford students in attendance to raise their hands if they had a job lined up. Though a majority of hands rose up, hundreds of people raised their hands when Trump asked if those without jobs would acknowledge themselves.

“People go into a great school, graduate top of their class with top marks and their parents are proud,” Trump said. “But they can’t get a job.”

Trump argued he would help get more jobs for college students by bringing back jobs from other countries into the United States.

On the issue of education, Trump said he would create reforms by eliminating the Common Core.

Throughout the course of the rally, Trump bragged about his success in recent polls and said he is a favorite to win all battleground states on Super Tuesday.

While he did recognize Cruz was projected to win Texas, Trump said he would dominate March 1.

Trump was particularly critical of Rubio because Rubio visited Virginia the day before and lashed out against Trump.

“I have to listen to a little guy like Rubio who says, ‘He’s [Donald Trump’s] a con man,’” Trump said. “It’s so insulting. He had to come up with something because he’s getting creamed in the polls.”

In addition to alleging Rubio was a liar, Trump mentioned Rubio broke down during a recent debate after New Jersey Gov. Chris Christie questioned the record of the first-term senator.

“I saw an almost complete meltdown,” Trump said. “In fact, I was prepared to catch him when he fell … He’s like a robot. You wind him up and he talks.”

Trump said he would refrain from attacking Carson and Kasich because they were low in the polls. But Trump did mention the lack of trust he would have in Cruz if the Texas senator became president. He argued Cruz won the Iowa caucuses because of voter fraud and campaign scare tactics, then took his criticisms a step further by questioning Cruz’s effectiveness in helping Texans.

“Ted Cruz has done nothing for Texas.”

Trump concluded his rally by urging his supporters to vote for him on Super Tuesday.

To secure the Republican nomination, a candidate must obtain 1,237 votes. By the time of Trump’s rally in Radford, he led the field with 82 delegates. Cruz, Rubio, Kasich and Carson round out the Republican field with 17, 16, six and four delegates, respectively.