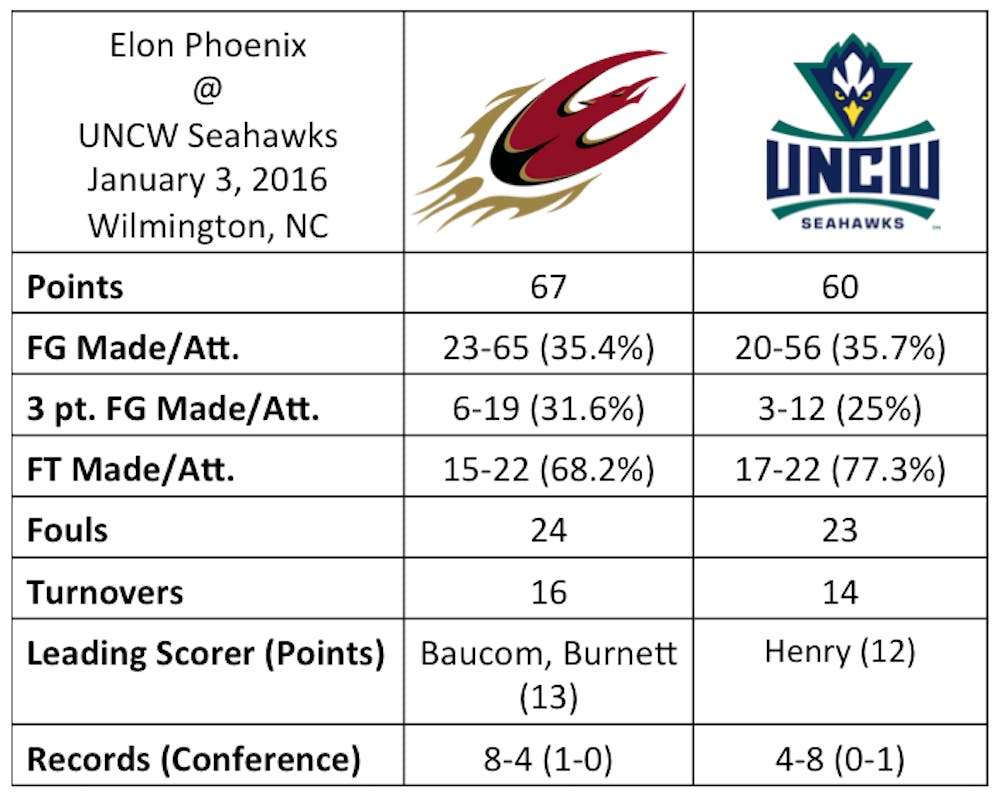 The Elon University women's basketball team fended off a late run from the University of North Carolina at Wilmington en route to a 67-60 win Sunday afternoon.

Despite early foul trouble and offensive struggles, the Phoenix secured the victory in the Colonial Athletic Association season opener.

"I felt like the early foul trouble that we had took us out of our rhythm offensively," said Elon coach Charlotte Smith.

Although the Seahawks had a limited roster — eight players dressed for the game — they asserted their dominance from unlikely sources.

Redshirt junior guard Jasmine Steele led UNCW with 13 points. She was challenged at times while shooting over tall Elon defenders but managed to keep her team within striking distance.

Junior guard Naqaiyyah Teague struggled immensely from the field. Previously, she had found success against the Phoenix (8-4 overall, 1-0 CAA), including a career-high 24 points at Elon last season, but the Phoenix limited her to 10 points Sunday.

"We had [junior forward] Jenifer Rhodes on her at different points in the game," Smith said. "That's a lot of size that she has to compete against. Then we tried to mix it up by switching [our guards and forwards]."

The final score may indicate a tight back-and-forth contest, but that wasn't the case during much of the first half. Elon held a 16-9 lead after one period of play and stretched the lead to 10 midway through the second period.

UNCW eventually took a 49-48 lead with 8:46 remaining in the fourth period — its first lead since going up 2-0 in the early minutes of the game.

But the Phoenix responded, in large part thanks to junior guard Essence Baucom, who tallied six points of her 13 total points for the Phoenix after the Seahawks took a late lead.

While Elon recorded the win, there is plenty for the Phoenix to learn going forward as it prepares to host Hofstra University and James Madison University on Friday and Sunday.

The Phoenix struggled to sprint back in transition, leading to easy buckets for the Seahawks. Elon outrebounded the much smaller Seahawks but still has to improve along the boards. Yet through the struggles, players are become increasingly comfortable.

"The CAA is a very physical and tough league, and we have to be able to just withstand a lot of different things that other teams are throwing at us," Baucom said. "Being that we're not the new team on the block anymore, we kind of understand what other teams are doing. We just have to do the little things and compete."