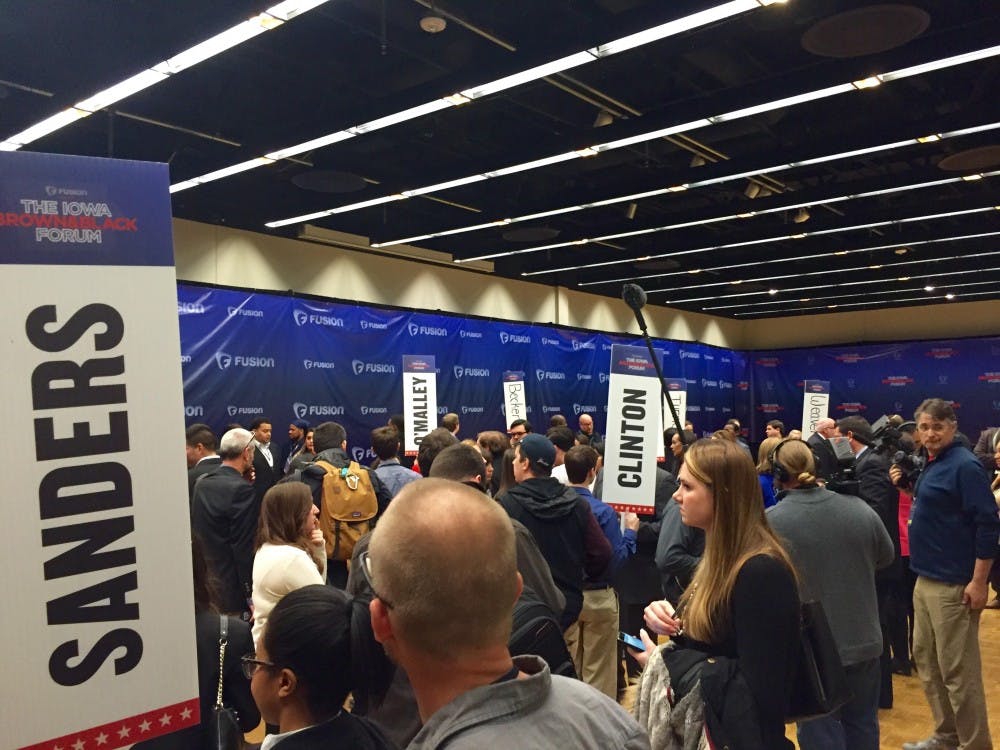 The "Spin Room" at the Brown and Black Democratic Forum, where representatives of the Democratic candidates provided their commentary on the Forum.

Hosted by Drake University, Sec. Hillary Clinton, Governor Martin O'Malley and Sen. Bernie Sanders all had 30 minutes to individually answer questions from the moderators and audience.

Sen. Sanders answered a variety of questions on everything from gun control to Affirmative Action.

On guns, Sanders said, "We've got to do everything we can to end these horrific murders and mass murders in this country." He went even further, stating that he does not believe assault weapons should be sold in the United States of America.

When asked who his favorite fictional president was, Sanders immediately shot back, " The guy from 'The American President.'"

Much of the conversation with Gov. O'Malley focused on sexual assaults on college campuses.

"I think we need greater openness and transparancy from universities about sexual assault," O'Malley said. He believes all universities need to have policies in place, and those policies need to be followed. O'Malley suggested reprimanding colleges and universities who do not follow the set rules and regulations.

On immigration, O'Malley believes that the diversity of the United States is eroding, and it requires immediate relief. "I believe the enduring symbol of our country is not barbed wire fence," said O'Malley. "It is the Statue of Liberty."

The candidate also wasn't shy to blame others for the current state of his campaign. When asked by a moderator if the DNC is the reason his campaign is struggling, O'Malley responded with an immediate "Yes!"

The final candidate on stage was Sec. Hillary Clinton. Much of her questioning focused on domestic issues, including the "Black Lives Matter" movement and immigration.

"We cannot let anybody live in fear," Clinton said. "At some point we all have to come together as a country and stand against violence."

A question from a Drake University junior was one of the most honest of the evening. The question focused on white privilege, and asked Sec. Clinton to name two times she had felt the effects of her white privilege.

"I think it is hard when you are swimming in the ocean to know exactly what is happening around you," said Clinton.

When it came to the controversial topic of women's rights, Clinton's answer was short and simple: "Do not tell a woman what to do with her body."

Moderated by Fusion's Jorge Ramos, Akilah Hughes, Alicia Menedez and New York Magazine's Rembert Brown, "The Iowa Brown & Black Forum " is the nation's oldest minority forum, annually focusing on the issues that affect minority voters in Iowa and across the nation. This was the first time the Democratic candidates all attended the same event in 2016.