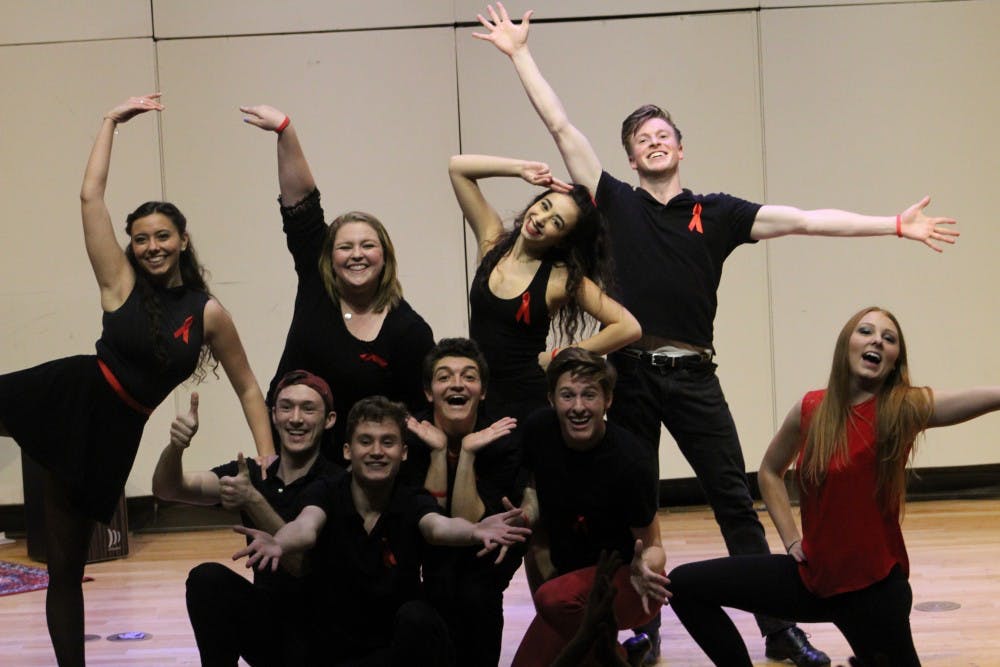 
Performers strike a pose at the end of "Positoovity" from "The Little Mermaid" during a benefit concert Jan. 16.

Directed entirely by Elon students, the program consisted of a variety of vocal and dance performances to help raise awareness and money for AIDS prevention. Money raised from the concert is going directly to the Broadway Cares/Equity Fights AIDS, a nonprofit organization founded in 1988.

“It’s an issue that’s still very relevant and close to home for people in this industry, so that’s why it’s really important to us,” said performer John Henry Ward.

During the concert’s two separate acts, 43 performers got up on stage and sang everything from songs in Disney’s "Tangled" to numbers from famous Broadway productions.

Between the acts, there was a 10-minute intermission with a raffle to help raise money.

Act two began with a drag queen performance of the song “Run the World (Girls)” by Beyoncé. The number won more than a few laughs from students in the audience.

The second act progressed with six more performance highlighted by a solo rendition of Sia’s “Chandelier” and a group performance of “Positoovity."

Julian Burzynski, an Elon junior and assistant director of the benefit concert, said he hoped the performances inspired those in attendance to gain a deeper understanding of the AIDS epidemic.

“The event really helps to bring awareness of how bad it is,” he said.

The program concluded with a talk from guest speaker and faculty supervisor Jack Smith.

“I think back on all the kind, generous, giving artists that I graduated with who aren’t here and aren’t able to speak tonight because of this awful disease,” Smith said. “How do I not speak when I have a voice and they don’t?”

Smith went on to tell the story of when he first heard of AIDS as a sophomore in high school and how the virus has affected his life as a costume designer in theater.

“You feel helpless — like there’s not a thing you can do to change any of this," Smith said. "And then something like Broadway Cares comes along so that the world is a better place."

Smith’s speech brought himself to tears and the audience to its feet.

1.2 million died in 2014 from AIDS-related causes worldwide, according to recent data from the United Nations. This is a 42 percent decline in deaths since the peak in 2004. While much progress has been made, Smith recognized those who have suffered and encouraged audience members to appreciate the strides made within the past several years.