Voices of Welfare project teams up with Burlington Times-News and Elon University to discuss stereotypes, affordability in Alamance County 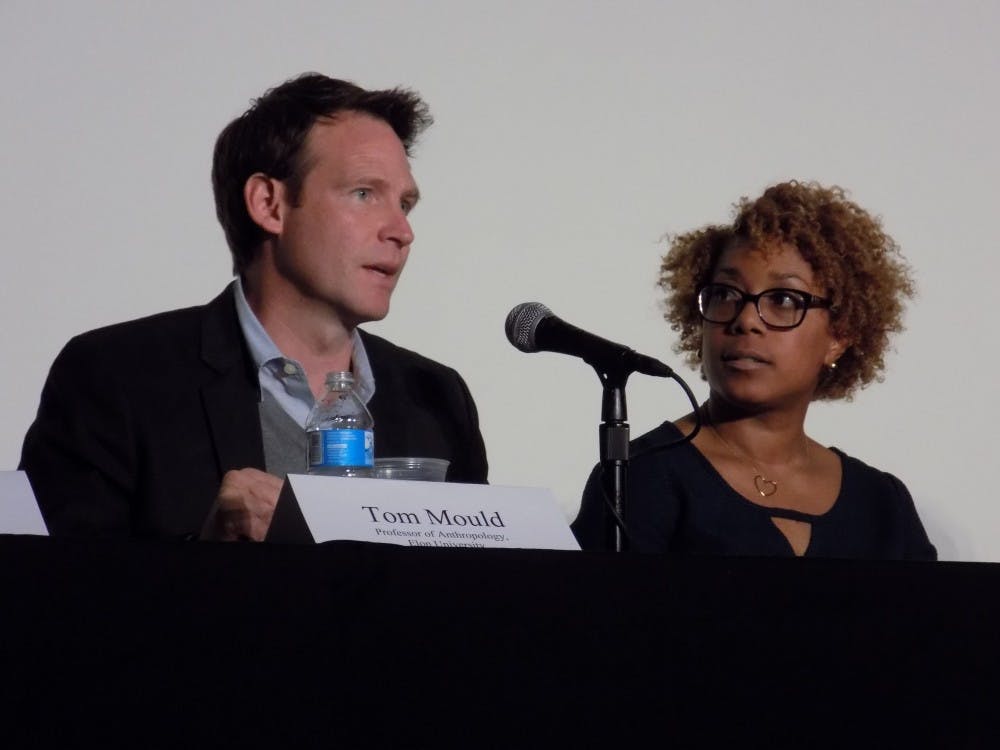 BURLINGTON — Three weeks ago, Louis Boswell had a home. Now, jobless and all but hopeless, she lives in a cheap Burlington hotel, using her diminishing social security payments to keep herself from a life in the streets.

“I am 72. I am a retired senior citizen, but I’ve worked all my life,” Boswell said. “Social security isn’t enough to live on. So I work so that I can keep my car, but working reduces my benefits. And I blew a gasket on the car, so now I can’t work. Now, I’m living in a hotel around the corner, and I feel trapped.”

Boswell, one in more than 100 in attendance at Thursday night’s Times-News Community Connections forum at Burlington’s Paramount Theater, is representative of the many people affected by poverty and government welfare programs in Alamance County.

That was brought to light at the discussion, titled “Re-envisioning Welfare in Alamance County.” It’s one in a series of outreach programs designed in 2011 by Elon University students and faculty, and was also sponsored by the Voices of Welfare project at Elon.

Jason Husser, faculty fellow for civic engagement and assistant professor of Political Science and policy studies, moderated the discussion. He was backed by panelists from numerous community interest and support groups.

“These are topics that are chosen by the community,” Husser said. “We really try and get into the weeds of how this issue affects the greater Alamance County.”

Husser and the panelists agreed that stereotyping social benefits recipients is a serious issue in gaining public support. The talk was intended to open the door for candid discussion in hopes of debunking some of the myth associated with our communities’ economically vulnerable.

“I come at the issue as a member of the general public, and see how much stereotyping is done in the media,” said Tom Mould, professor of anthropology. “You’ll find that the image of those in need of welfare is different from the statistics. Welfare households, on average, have one to two children, and use food stamps for an average of three years.”

Many panelists echoed Mould’s call to break away from stereotypes, but also stressed the importance of humanizing those in need of social benefits on the premise they are part of the community, regardless of socioeconomic status.

“I’m quick to correct people saying ‘those people’,” Durr said. “It’s us. It’s you. It’s me. All of us, together working to solve community problems.”

The issue of day-to-day affordability was also discussed by panelists and the audience. The panelists agreed that the majority of people on welfare have jobs, but do not make enough money to sustain themselves.

They feel that the issue here is obvious: people work every day at minimum wage, not even making enough to pay for an average one-bedroom apartment in Burlington.

“In one day, 242 homes had their water turned off in Burlington, making the house unfit for human living,” said Kim Crawford, executive director of the Allied Churches of Alamance County. “Maybe we need to raise the minimum wage. People can’t afford to live off it.”

A recurring theme was what the average community member can do to tackle the issues of social justice head on.

Panelists agree the best way to combat poverty is to get involved and then share the stories of the people affected, even if they come from a setting as impersonal as a community event like this one.

“Events like this are important because if one person hears about it, maybe they all will,” Crawford said. “It’s like a domino effect.”