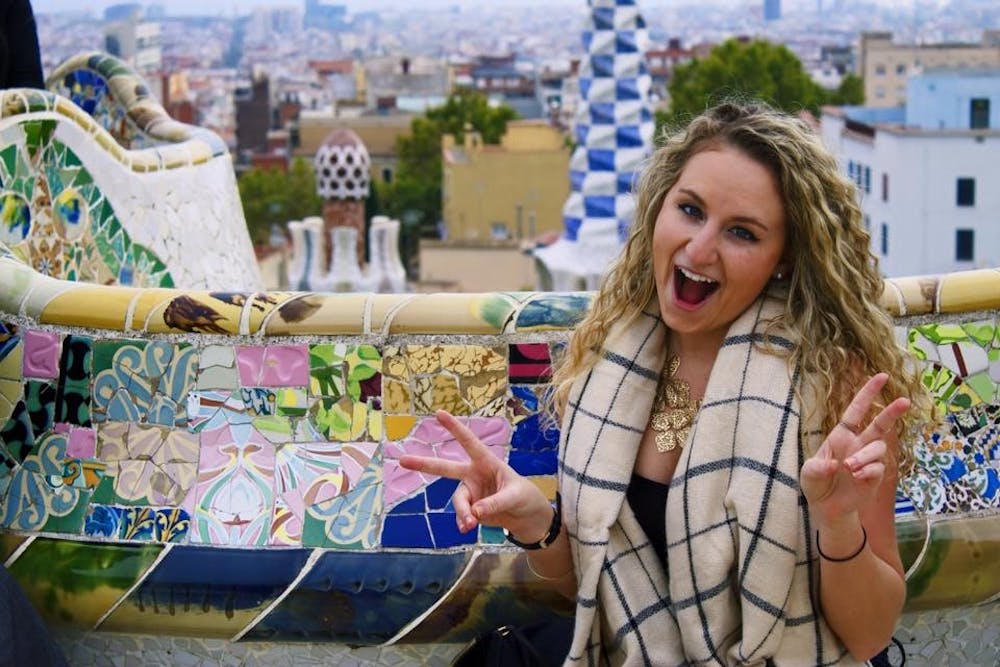 While abroad in London the fall of her senior year, Lane Deacon had the opportunity to travel to other foreign cities like Barcelona. Photo submitted by Lane Deacon.

Senior Sydney Harris arrives at The Oak House and immediately goes to order a cup of tea. Sipping it, she notices how it in no way compares to afternoon tea she had daily during her past semester in London.

Harris was one of more than 100 Elon University students studying at the Elon Center in London, England, as part of Foundation for International Education’s (FIE) international study program in the fall. Harris was one of only a few seniors in the entire Elon program — almost everyone else was a sophomore  or junior.

“One of the reasons I went to Elon was study abroad, and I would have regretted not going,” Harris said. “I knew it would be an experience that I’d love. I knew I had to take a fifth year and I knew I’d still have senior spring and time left after returning.”

Though Elon’s Study Abroad online application allows seniors to apply, there is a sigma of studying abroad for a full semester during senior year and missing out on part of the last year at school.

“I think it’s the social norm to go abroad as a junior,” Harris said. “It’s the year you are established at school and could leave and then come back to friends and have a year of final growth, while senior year is focused more on postgrad. The mindset of seniors is looking ahead and enjoying the now. Study abroad is a new experience, and senior year is about finishing what you already started.”

For Harris, the timing just worked out for her to study abroad during her senior fall, as she spent Winter Term during her junior year on the GBL 262: “Gutenberg to Web” program to London, Germany and Prague. Another senior, Lane Deacon, chose the Elon in London program during her senior year as well to live in a new culture and explore Europe and England.

“I really wanted to go abroad because I had never been out of the country before,” Deacon said. “I chose London from the options because it offered an internship. I didn’t know if I’d be able to fit it in and graduate on time, and then I applied and got in.”

When participating in an Elon program, many of the students know several friends going — people to travel to new places and to room with. But, since the program is mostly sophomores and the juniors, several of the seniors come in without knowing other students younger than them.

“I came in not knowing anyone, which is different from juniors and sophomores, who come with their class,” Harris said. “I wanted to keep an open mind because I realized that I was missing part of my senior year. I wanted to make sure my experience was worthwhile and I wanted to make friendships and connections with people I hadn’t before.”

Once abroad, students become closer as they experience living in a city, a new country and living on their own. Strangers become flatmates in a foreign country.

For Deacon and Harris, it was comforting to meet people and make friends to help make their global experience worthwhile, especially coming in without knowing other students from other studies or classes.

“Going in, I was nervous because I didn’t know anyone going and I did random for my roommates,” Deacon said. “When I was there, I made some really good friends and we bonded. Age wasn’t really a factor that much over there.”

One of the major reasons that deter students from studying abroad as a senior is the fear of missing their last semesters at Elon and the traditions held on campus. But, if studying abroad and traveling is truly a passion, the benefits can outrank any longing for one last memory on campus for one semester.

Instead these traditions are traded for a new experience.

“I was really worried when I first left about FOMO (fear of missing out), and there were times I saw things my friends posted online, but I think my experience abroad outweighed my nostalgia for Elon,” Harris said. “Living abroad you get to embrace a culture than if you are just visiting and are able to gain a global perspective. The little things I missed out on like the N.C. State Fair, but I got to go to Italy for fall break, sacrificing the smaller things for newer experiences.”

As a senior, Deacon admits that age is not a factor in anything between participants, except she had more previous work experience for an international internship.

“You don’t have to be a sophomore or junior to travel,” Deacon said. “I’m going to travel for the rest of my life. I think I had more fun studying abroad than I would have if I stayed [at Elon] my senior year. I know I had a total blast in London for four months and I wouldn’t have traded it for anything.”

Though she missed her friends, who she now has one semester left with, Deacon was able to keep in touch with them through Skype and Facebook, so it wasn’t unbearable.

Harris, though currently a senior, plans to take a fifth year at Elon to finish up her studies. Her decision to study abroad did impact her reasoning to stay at Elon for an extra year. But for her, studying abroad was worth missing one semester on campus.

“If I graduated in four years, I still would go abroad [my senior year],” Harris said. “Ultimately, I would have wanted to sacrifice one semester at Elon for a trip abroad. If I didn’t study abroad, I wouldn’t stay an extra year, but it’s definitely worth it.”

During her fifth year, Harris plans to travel again for Winter Term, either on a winter program or independently. Deacon said it doesn’t matter when you go abroad, as long as you make the time to at some point because it is such a unique experience.

Harris said how going abroad as a senior isn’t ideal, and it’s nice to be able to have more time at Elon to be with your new friends that you traveled internationally with. Going abroad with a school program has given both new and lifelong friends something that occurred as they embarked on new adventures together.

“I think the experience I had was more than I could ever ask for and the people I met made it so much greater,” Harris said. “I became closest with other Elon people and being also able to see the London, experience from a Londoner perspective enhanced my semester abroad.”

Studying and traveling abroad seem to be well worth the semester away from campus, even if it’s during senior year. It is the chance for an adventure of a lifetime and to explore new cultures and new locations — one last memory of college that will be impossible to forget.

“It makes the last year of college awesome,” Deacon said. “I’d recommend going abroad any year, it doesn’t matter when as long as you go. It does suck that I made all these great friends and now I have to leave — if you go as a junior, you’ll get more time with them. I’m lucky to have gone abroad anyway.”