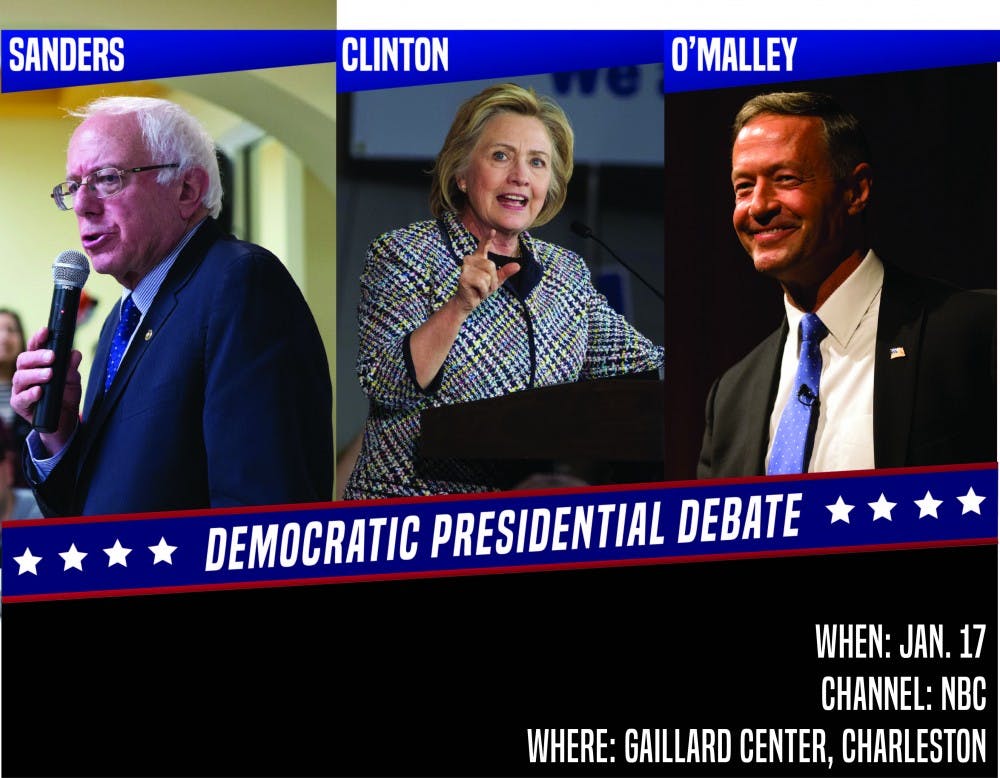 With education and healthcare at the front of the debate, the candidates expressed much disagreement. This debate was of particular importance since the Iowa caucuses and the New Hampshire primaries begin before the next debate takes place Feb. 11 in Wisconsin.

"Right now what we have to deal with is the fact that 29 million people still have no health insurance," Sanders said. "We are paying the highest prices in the world for prescription drugs, getting ripped off. And here's the important point: we are spending far more per person on healthcare than the people of any other country."

Recent data from the World Bank revealed the United States has the third highest health expenditure per capita in the world, narrowly trailing Norway and Switzerland.

Clinton argued Sanders wants to tear up the Affordable Care Act — commonly referred to as Obamacare — and undo the progress of the past made by former Presidents Franklin D. Roosevelt and Harry Truman.

"We have been raising questions about the nine bills that he introduced over 20 years as to how they would work and what would be the impact on people's healthcare," Clinton said. "He didn't like that. His campaign didn't like that either."

Clinton claimed Obamacare was "one of the great accomplishments" thus far into President Barack Obama's time in the White House. Sanders responded that he, Truman and Roosevelt wanted healthcare for all people as a right in a cost-effective way.

Bernie Sanders: "We need a revolution in this country in terms of mental health treatment." #DemDebate https://t.co/w5iLkXMMAg

"We're not gonna tear up the Affordable Care Act," Sanders said. "I helped write it. But we are going to move on top of that to a Medicare for all system."

Though O'Malley fought for a fair share of time, several of the most notable moments of the debate resulted from heated exchanges between Clinton and Sanders.

Sanders said he has a D-minus rating from the National Rifle Association and has always supported instant background checks. He argued Clinton was inaccurately portraying him as an ardent gun supporter.

O'Malley immediately interjected with a zinger that both candidates have been inconsistent on the issue of gun violence.

"I've listened to Secretary Clinton and Senator Sanders go back and forth on which of them has the most inconsistent record on gun safety legislation," O'Malley said. "And I would have to agree with both of them. They've both been inconsistent when it comes to this issue. I'm the one candidate on this stage that actually brought people together to pass comprehensive gun safety legislation."

As the debate progressed, education became a more prevalent issue.

"The young people that I talk with are pretty disappointed about the the economic prospects they feel they're facing," Clinton said. "So making community college free, making it possible to attend a public college or university with debt-free tuition [are some of my proposals]."

Sanders argued his plan would go even further than Clinton by making public colleges and universities tuition free. When asked how he would pay for it, he said he'd place a tax on Wall Street speculation and force the wealthy to invest back into the country they have abused in the past.

He also claimed Clinton was incapable of making the best choices for the country because of her close relationship with Wall Street.

"You've received over $600,000 in speaking fees from Goldman Sachs in one year," he said. "I find it very strange that a major financial institution that pays $5 billion in fines for breaking the law, not one of their executives is prosecuted."

The debate then concluded with a discussion on foreign policy and an opportunity for the candidates to address an issue that hadn't been mentioned earlier in the debate.

O'Malley said he would have the federal government reevaluate its national security defense strategies so that the U.S. forms coalitions and builds allies.

"Over the long term, we need to develop new alliances," O'Malley said. "We need a much more proactive national security strategy that reduces these threats before they rise to a level where it feels like we need to pull for a division of marines."

Sanders agreed there should be comprehensive change in how involved the U.S. becomes in international issues.

He emphasized the importance of redirecting the military budget to combat terrorism rather than "fight the old Cold War with the Soviet Union."

According to the National Priorities Project, a national non-profit, non-partisan research organization that makes federal budget information accessible to the public, 54 percent of total discretionary spending in the U.S. went to the military.

"Very little of that budget — less than 10 percent — actually goes into fighting ISIS and international terrorism," Sanders said. "We need to think about making fundamental changes in the priorities of the defense department."

Clinton argued she would be the strongest candidate on foreign affairs because of her experience working with difficulty individuals.

When asked about her relationship with Russian President Vladimir Putin, Clinton chuckled and said, "It's interesting. It's one I think of respect. We've had some very tough dealings with one another and I know he's someone you have to continually stand up to. Like many bullies, he is somebody who will take as much as he possibly can unless you do."

Clinton: My relationship with Putin is 'interesting' #DemDebate https://t.co/xf1VM3urm3

Clinton currently finds herself well ahead of Sanders in several polls, including a 25-point lead in the most recent NBC News/Wall Street Journal poll. Other polls have a slimmer lead for Clinton around 10 points, according to Real Clear Politics. O'Malley lags well behind Sanders and Clinton, polling around 2 percent.

Though national polls are indicating the majority of Democratic support going to Clinton, Sanders is mounting a comeback in important battleground states. In Iowa, Clinton is leading by an average of four points. In New Hampshire, Sanders is ahead by an average of six points.