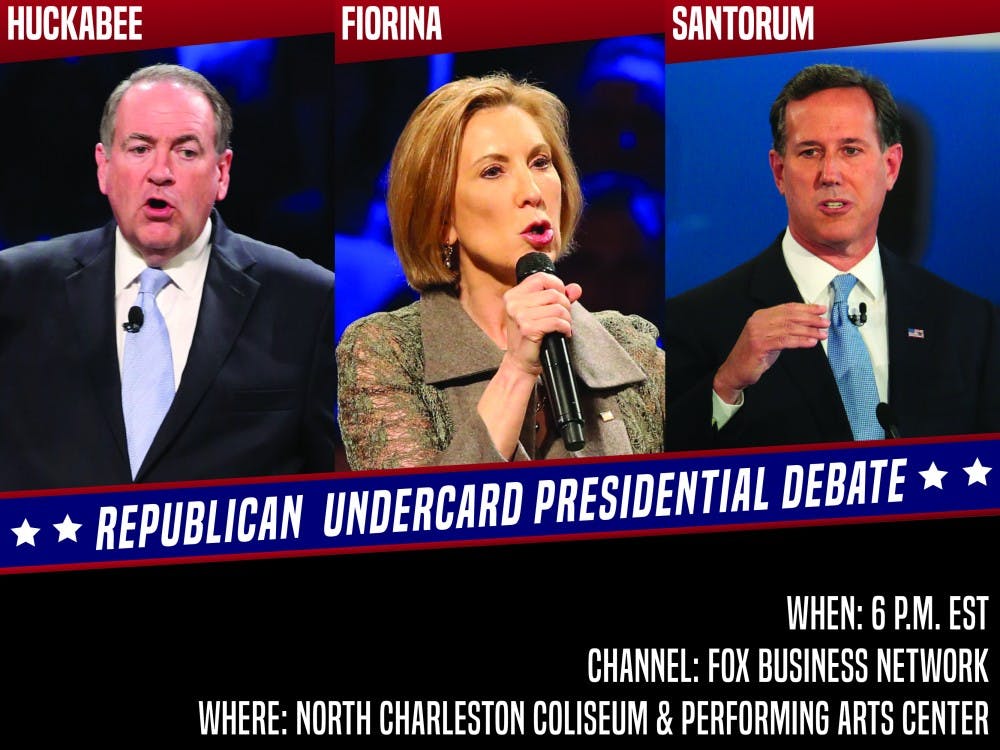 7:01 p.m. Fiorina's closing statement: "You cannot wait to see the debate between me and Hillary Clinton. You will pay to see that fight." She refuses to settle and not challenge the American system

6:58 p.m. Huckabee's closing statement: "I want to be the president that treats every person, including the unborn as a person."

6:56 p.m. Santorum goes well over time but has a nice zinger for Rand Paul: "I know I'm out of time but I'm gonna take some of Rand Paul's time for a second."

6:53 p.m. Looks like Fox Business is going to commercials one final time before closing statements from candidates.

6:51 p.m. Santorum is frustrated with decline of families and increase in single-parent households: "We have been too politically correct in this country because we don't want to offend anybody to fight for the lives of our children."

6:50 p.m. Huckabee shares frustration with tax codes: "We reward the behavior that we want less of."

6:49 p.m. Santorum talks about taxes and says government is punishing success. "The tax system punishes them. If you work really hard and start working up the economic ladder, you get bumped up in the tax bracket."

6:45 p.m. Back from second commercial break. Question goes to Fiorina about middle class and widening income gap. What will you do to strengthen middle class that's no longer the majority.

"When government gets bigger and bigger and more and more powerful, the rich get richer,m the poor get poorer and the middle class gets squeezed."

She says small businesses created two-thirds of the new jobs in this country and they employ half of the people. She ten discusses her plans to reform the tax code.

6:42 p.m. "We don't have to cut social security to any senior who has worked their lifetimes for it."

6:39 p.m. Santorum says he wants to send six million immigrants back to where they came from.

6:34 p.m. Santorum criticizes foreign policies under Obama administration: "Obama has put Iran on a path to a nuclear weapon."

6:30 p.m. Would Huckabee support any federal government oversight in regulating guns? He says president has pushed ideas that wouldn't have prevented attacks in San Bernardino and other mass shootings. He says mass shootings have happened in gun-free zones and people who could've stopped it weren't allowed to stop them.

6:27 p.m. Fiorina disagrees with Santorum:" "I come from the technology industry and there's one thing I can tell you bureaucracies don't know how to do and that is innovate." She says private sectors should help government prevent terror attacks. She ten attacks Clinton's email scandal.

.@CarlyFiorina slammed the Obama administration's foreign policy strategy. Do you agree with her? #GOPDebate https://t.co/bwp6wmGBXX

6:24 p.m. Question to Santorum: Should companies like Facebook and Twitter be required by law to be more active in fighting terror? Santorum: "Technologists are not war fighters. They are thinking about cyber security." He says government should not require sites like Facebook to fight against terror.

6:22 p.m.  We are back from commercial breaks. Live stream is here.

6:18 p.m. Fiorina criticizes Donald Trump for wanting to speak with Russian President Vladimir Putin. She then says it is important for U.S. to identify allies and enemies. "In the fight against ISIS, Saudi Arabia is our ally. Iran is our adversary...We can never outsource our leadership"

6:15 p.m. Fiorina says America should not let immigrants into country. "This administration has told us they don't even both to check Facebook or Twitter to see who's pledging to Jihadis."

6:11 p.m. Santorum asks veterans to stand and then explains his support for them. "I will have your back. I will not let Americans be trampled on anymore by these radical Jihadists."

6:08 p.m. Question to Fiorina: How do you see America's role today. Fiorina's answer: "We have refused to respond to every provocation."

6:07 p.m. Santorum on state of economy: "They've [Democrats have] been in control over these last seven years. And what have we seen?" He says 2 million manufacturing jobs have gone away under Obama's umbrella because he is focusing too much on global climate change.

6:05 p.m. According to Huckabee, President Barack Obama is out of touch with the world and doesn't understand the people he is supposed to be representing.

6:03 p.m. Candidates asked to explain their thoughts on the state of the economy. Fiorina says she is honored to be on stage and then attacks Democratic Party frontrunner Hillary Clinton: "Unlike another woman in this debate, I actually love spending time with my husband." She then says state of economy "is not strong."

6:01 p.m. Trish Regan and Sandra Smith will be moderating the hour-long debate between Fiorina, Huckabee and Santorum. Each candidate has 90 seconds to answer questions and 60 seconds for rebuttals.

6:00 p.m. Fox Business is streaming and the debate is about ready to get underway.

5:45 p.m. The debate is about 15 minutes away. For those without TV, you can watch the action here.