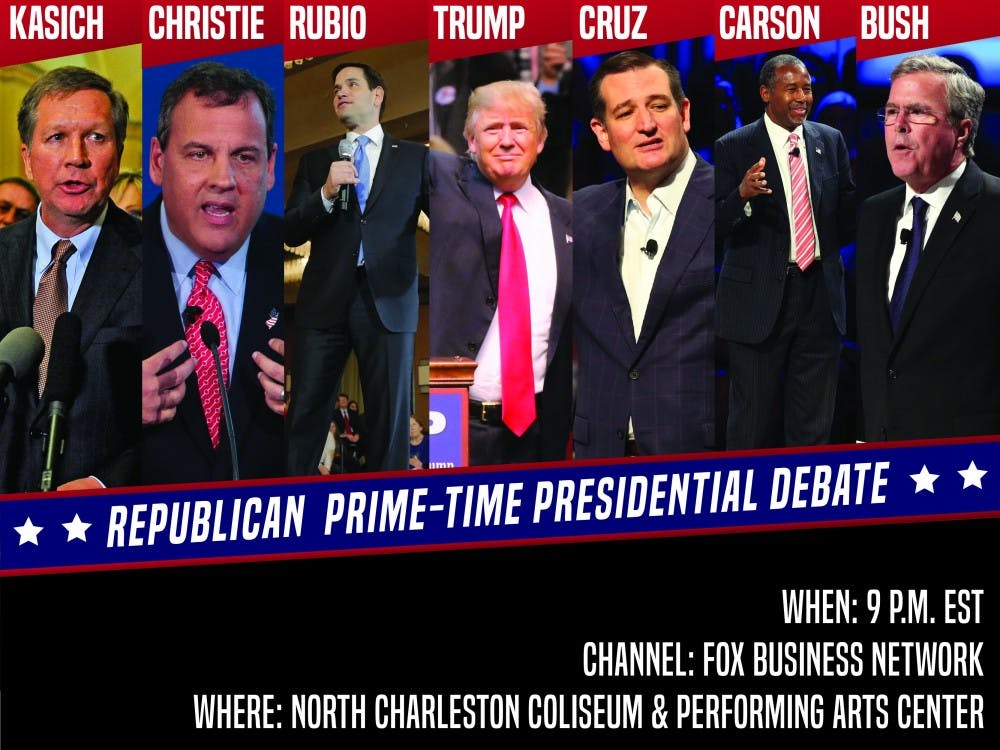 11:26 p.m. Trump's closing statement: "If I am president, there won't be stupid deals anymore. We will make America great again."

11:24 p.m. "If you elect me, we will turn this country around. We will reclaim the AMerican Dream." -Rubio

11:21 p.m. "We need a fighter for this country again. I've lived my whole life fighting." -Christie

11:13 p.m. Bush wants to control the border and is frustrated that he hasn't answer a question in quite some time (about 50 minutes).

11:08 p.m. Cruz says Rubio's amnesty bill expanded Obama's agenda and that is why he's led the fight to not allow amnesty.

11:06 p.m. Rubio receives question about immigration and admits to changing his mind within the past 24 months.

"When I'm president, when we don't know who you are or why you are coming, you're not entering the United States of America."

11:01 p.m. Trump would put his assets in a blind trust or have his children run his business if he became president. He says he wouldn't care about anything but his his job as president if he won the election.

"If I become president, I could care less about my company."

10:56 p.m. Christie says Rubio didn't answer the question on entitlements: "You had your chance, Marco. You blew it."

10:54 p.m. Rubio claims Cruz's plan to abolish the IRS is not feasible.

"We need to break the Washington cartel."

10:48 p.m. Carson explains what he would do to combat companies taking their money to countries with lower taxes.

"It's not the evil rich people. It's the evil government that is putting all these regulations on us that we cannot survive."

.@RealBenCarson explained what he would do as president to stop companies from moving out of the U.S. #GOPDebate https://t.co/lFYoiocyEo

10:46 p.m. Christie explains how he would improve infrastructure in South Carolina by reforming corporate tax system.

10:41p.m.  After commercials, tax reforms will be discussed.

10:37 p.m. Rubio argues best way to fight China is to improve American economy. Trump argues that Rubio wouldn't be doing enough and the process for fighting China would drag on.

10:33 p.m. Kasich supported NAFTA and says Trump is right about the lack of pressure China is putting on North Korea.

.@JohnKasich discussed his stance on free trade during tonight’s #GOPDebate. WATCH and weigh in. https://t.co/v4mUcPSYaN

10:31 p.m. Trump argues China is not doing its part to fight against North Korea. "Without China, North Korea doesn't even eat."

Trump clarifies he told the New York Times that America has a lot of power over China and needs to stop China from continuing to devalue its currency.

10:30 p.m. Carson proposes gathering a group of experts from other countries to learn more about how to improve the immigration screening process.

10:28 p.m. "We should pass the Ex-Patriot terrorist act which I've proposed." He also suggests passing legislation that refugees to let refugees into U.S. from ISIS-controlled nations.

10:27 p.m. Rubio argues Obama is ignorant when it comes to keeping America safe from ISIS: "This president has consistently underestimated the threat of ISIS."

10:25 p.m. Kasich is fine with a halt on letting in Syrian refugees. However, he disagrees with a total ban on Muslims. Christie adds he agrees Syrians shouldn't be allowed into the country.

10:23 p.m. "The police are the most mistreated people in this country." -Trump

Trump's response: "I want security for this country."

10:20 p.m. Trump on his plan to ban Muslims from entering the U.S. Is there anything that would make you want to rethink this position.

"No. We have to get rid of political correctness." -Trump

"We have a serious problem and we can't be the stupid country anymore."

.@realDonaldTrump stood by his position to temporarily ban Muslims from entering U.S. during tonight's #GOPDebate. https://t.co/spvBKj2I12

10:17 p.m. Chrstie asked how important it is to remove Syrian President Bashar al-Assad.

"We have the Russians and the Iranians working together [to help Assad]."

10:14 p.m. Senator Lindsey Graham (R-SC) is in audience and receives applause from audience. Question to Carson: Is Senator Graham right in wanting to send 20,000 ground troops to take out ISIS?

Carson explains he would "go ahead and take the oil from them," as well.

10:08 p.m. Kasich expresses support for fracking: "It's critical for us to be energy independent and we're getting there because of fracking."

10:02 p.m. Cruz criticizes New York values that Trump has. This is the second example of Cruz going on the offensive.

"Not a lot of conservatives come out of Manhattan. I'm just saying."

He responds by saying Gun Owners of America has endorsed him because he has a proven record. Larry Pratt, executive director of GOA, has been interviewed by The Pendulum and audio interview will be added for a future story about why Pratt endorsed Cruz.

9:57 p.m. Christie argues Obama is running a dictatorship by trying to bypass Congress.

He calls Obama a "petulant child," and delivers the following message to him in case he is watching the debate: "Mr. President, we're not against you. We're against your policy."

"If this president could confiscate every gun in America, he would."

.@marcorubio on guns: “The Second Amendment is not an option. It is not a suggestion. It's a Constitutional right.” https://t.co/3hAOIgq9o7

9:54 p.m. Trump says he's a strong advocate for the Second Amendment: "What Jeb said is correct. We have a huge mental health problem in this country."

9:51 p.m. First question after break goes to Bush about gun rights in the wake of the Charleston shooting.

"We don't need to created new laws." He argues Clinton and Obama want to take away guns from law-abiding gun owners.

9:45 p.m. Carson on American values "There's no question that we should be able to look at every past president...Is this America anymore? Do you have standards? Do we still have values?...Our strength is actually in our unity."

9:43 p.m. Kasich says the Republicans would win in every state if Sanders topped Clinton and secured the Democratic Party nomination."I know Bernie and I can promise you he's not going to be President of the United States." -Kasich

.@John Kasich: “There are ways to retrain the 50 and 51 year-olds because they [have] great value.” #GOPDebate https://t.co/hJtl7UkkfO

Kasich is the first candidate to talk about higher education.

"We gotta fight like crazy to make people think the American Dream exists because it does."

9:41 p.m. Carson says he was mentioned because Bush used the word, "Everybody."

9:40 p.m. Bush says he prefers sending an optimistic message to the American public.

9:39 p.m. Christie says he is far from liberal and someone has convinced Rubio that attacking him would give him better results. He says he is more accountable than Rubio because he is a governor rather than a senator.

9:35 p.m. Question to Trump: How would a President Trump unite the party?

"Our military is a disaster. Our healthcare is a horror show...Our country is being run by incompetent people and yes I am angry."

“Yes, I am angry!” @realDonaldTrump said he is angry because the country is a mess. Do you agree with him? https://t.co/mf9ZiRGBLJ

9:34 p.m. Rubio tries to get debate back on track and not focus on the back-and-forth exchanges between Cruz and Trump.

"I hate to interrupt this episode of court TV. I think we have to get back to what this election is supposed to be about." -Rubio

9:31 p.m. Trump and Cruz go back and forth. Trump says Cruz has to be prepared for lawsuit: "If you become the nominee, who the hell even knows if you can serve in office."

.@tedcruz attacked @realDonaldTrump when responding to talk that he isn’t eligible to run for president. #GOPDebate https://t.co/HZSMWTwI4b

Question to Trump: Why are you raising this issue now:

9:29 p.m. Trump says he is ahead in polls and Cruz is overstating his success:

"In Iowa in the last three polls, I'm winning in Iowa. You shouldn't misrepresent how well you're doing."

9:26 p.m. Cruz asked about his eligibility since he was born in Canada.

"I'm glad we are focusing on the important topics of the evening."

He says Trump lawyer didn't have any problem in September. He then lays a major attack on Trump.

"Since September the Constitution hasn't changed, but the poll numbers have."

9:22 p.m. Gun rights and national debt will be focus after commercial breaks.

9:21 p.m. Cruz responds to question about getting $1 million in unfair contributions:

"The New York Times and I don't have the warmest of relationships."

9:19 p.m. Trump on how he justifies not allowing people into America who are seeking asylum:

"We can't allow people to come into our country and break our borders."

9:17 p.m. Carson jokes he got a question much earlier than last time and is happy to be included in the debate. "We have the world's best military even though he [Obama] has done everything to diminish it."

9:12 p.m. Jeb Bush on state of union under Obama's administration: "The simple fact is the world has been torn asunder." He agrees with Christie that America's military must be rebuilt.

He also criticizes Clinton and says she shouldn't be allowed to serve as president.

9:09 p.m. Christie is asked where and when the government should use military action.

"At Tuesday night, I watched story time with Barack Obama. It sounded like everything in the world was going amazing."

Christie says America must talk to its adversaries and those adversaries have to know the limit of America's patience.

"You can't give Hillary Clinton a third term of Obama's presidency."

He says America is not the world's policeman and that the military must be rebuilt.

9:07 p.m. Kasich is asked what he would to grow economy and create jobs. He would do the following three things to balance the budget.

2. Tax Cuts (for individuals and corporations)

9:06 p.m. Ted Cruz criticizes Obama for not mentioning the 10 sailors who had been captured in Iran. "It was heartbreaking. But the good news is the next commander-in-chief is standing on this stage."

He criticizes Obama for having "left behind the working men and women of this country."

9:04 p.m. Candidates have been introduced. The economy is the first topic.

For a recap of the undercard debate, click here.