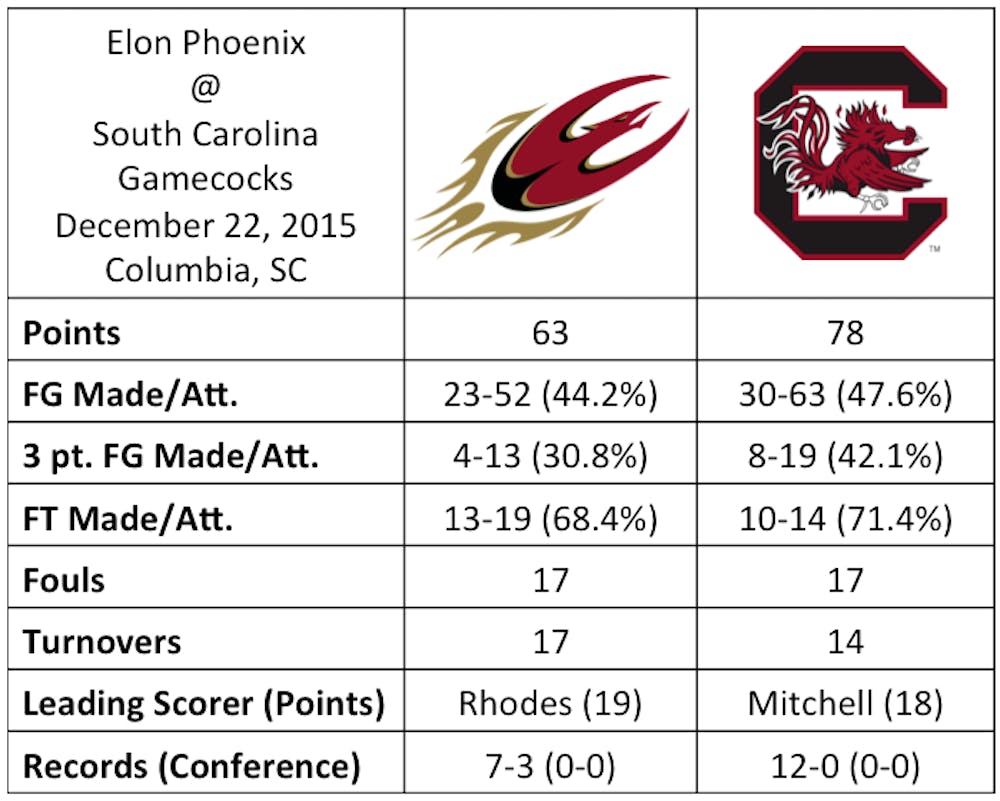 The Elon University women’s basketball team held a sizable lead Tuesday against the No. 2 University of South Carolina midway through the second period. But a strong second half of rebounding and 3-pointers from the Gamecocks propelled them to a 78-63 defeat of the Phoenix.

“Being able to stay in a game with the No. 2 team in the nation should give us a lot of confidence going into conference play,” said Elon head coach Charlotte Smith.

While the Phoenix wound up with the loss, it played competitively throughout the game. Early in the second period, Elon led 20-13 — the team’s largest lead. Though the team trailed by eight later that same period, it tied the game midway through the third period.

“Since I’m an undersized [six-foot] post, I wanted them to know that I work hard,” Rhodes said. “That’s one thing I wanted to make clear. I think I did that.”

But from the middle of the third period to the end of the game, Elon struggled defensively. The Gamecocks began effectively working the ball inside the paint and feeding their bigs down low. Perhaps the biggest momentum swing came after back-to-back turnovers from sophomore guard Shay Burnett and three offensive rebounds from the Gamecocks.

South Carolina outrebounded Elon 12-6 in the third period and took a 56-47 lead by the end of the 10-minute quarter.

As the game progressed, the Gamecocks began hitting deeper shots. One of the keys to the game for the Phoenix was to keep the Gamecocks working around the perimeter since they struggle from beyond the arc.

South Carolina entered the game shooting below 30 percent from 3-point range but went 8-for-19 (47.6 percent) against Elon.

One of the more frustrating moments of the game for Elon occurred when Gamecocks senior guard Tina Roy went 3-for-3 beyond the arc in the second half. This helped swing momentum in their favor.

“We knew coming into the game that Roy was a shooter,” Smith said. “That was the shooter that we really wanted to focus in on. I felt that we had some missed assignments and gave her a lot of good opportunities.”

Despite the loss, Elon felt proud of its performances. The Phoenix outrebounded the much taller Gamecocks at halftime and limited the Gamecocks to 34 rebounds by the end of the game.

Elon’s four-game winning streak came to an end with the loss, but the Phoenix looks to close out 2015 with a win at 7 p.m. Dec. 28 at West Virginia University.