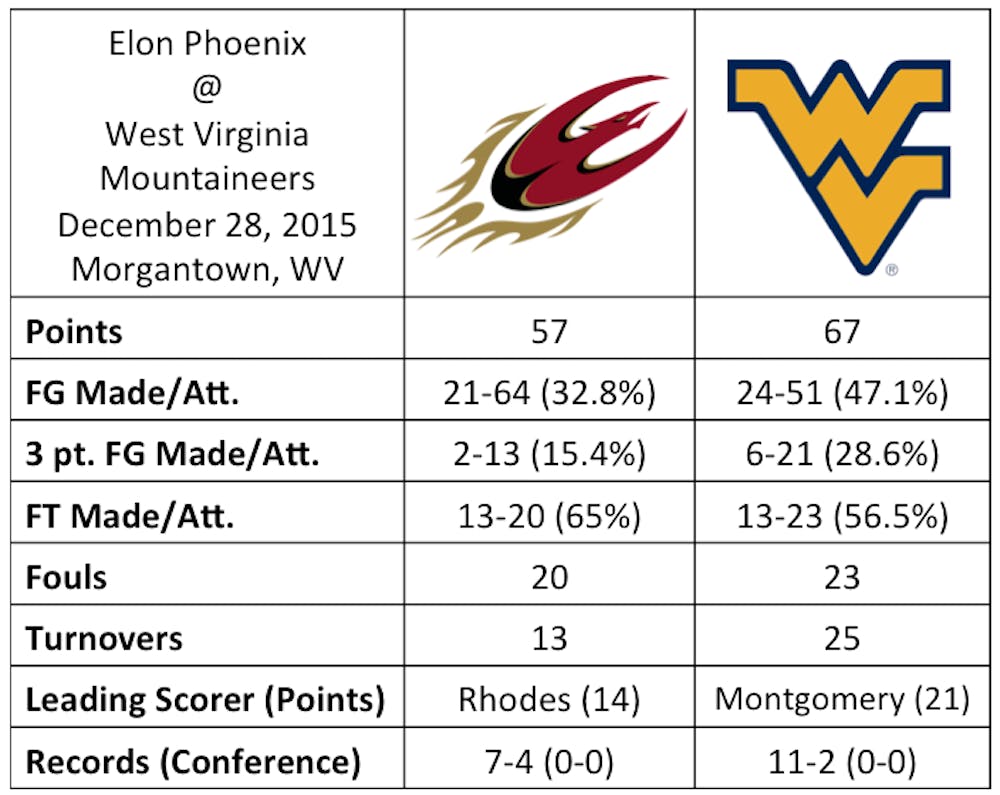 MORGANTOWN, W.Va. — From the opening tip-off, the Elon University women's basketball team did not look confident at West Virginia University Monday night. The Phoenix lost on the boards, committed too many turnovers and fell behind by double digits after one period of play.

Despite a late run in the fourth period, Elon fell short of a comeback and lost 67-57.

"We were a little scattered on both ends and kind of picked it up, but didn't pick it up early enough to get the win," said junior forward Jennifer Rhodes.

One of the keys going into the game at West Virginia (11-2) was to establish a strong rebounding presence. In the first period, though, the Phoenix got outrebounded 14-4, which allowed the Mountaineers to capitalize on second-chance opportunities and take an early 23-11 lead.

Rhodes and junior guard Lauren Brown scored all the points during that run, leading the offensive charge for the Phoenix. Rhodes finished the night as the scoring and rebounding leader with 14 points and eight rebounds. Brown was second on the team in scoring with 13 points.

While Rhodes and Brown helped keep Elon within striking distance, Mountaineers junior center Lanay Montgomery and senior guard Bria Holmes dominated down the stretch. Montgomery went a perfect 9-for-9 from the field to finish the night with 21 points. She was one rebound shy of a double-double. Holmes also played stellar offensively with 19 points.

"Montgomery was really difficult to guard," Rhodes said. "We talked about [how to defend her] yesterday in practice, but when we got the game situation, it just wasn't effective."

In last few games, the Phoenix has tested itself against Power Five conference opponents, including the University of South Carolina and North Carolina State University. Elon beat NC State 69-66 Dec. 13.

While the results have been in the loss column against South Carolina and West Virginia, the Phoenix has proven it can compete against the best of the best. The question now becomes how well Elon can compete in Colonial Athletic Association (CAA) play.

The Phoenix will begin its CAA schedule on the road at 2 p.m. Sunday against the University of North Carolina at Wilmington.