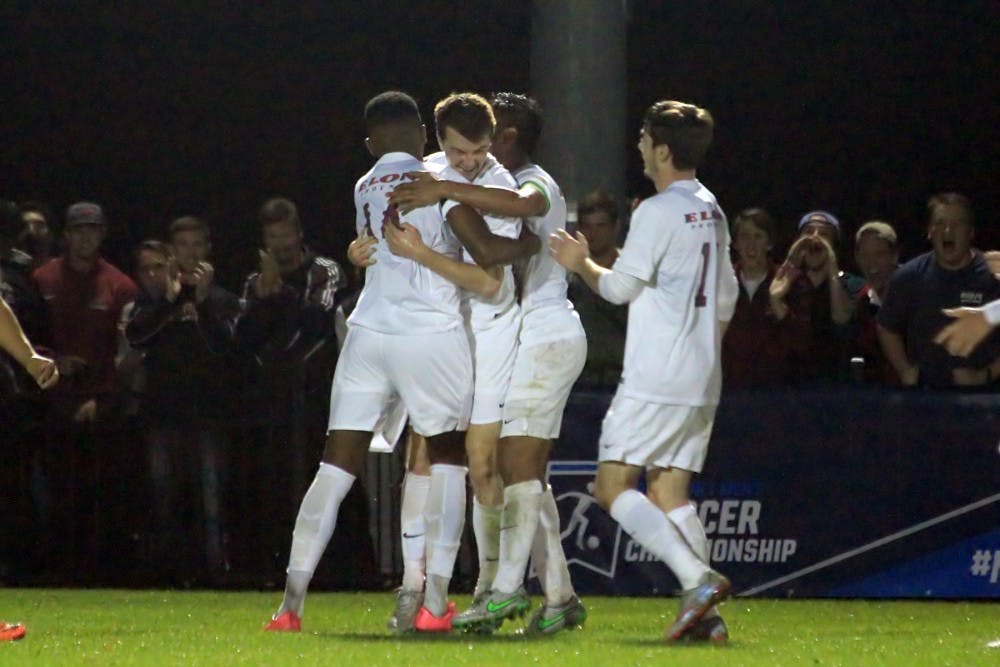 Elon University men’s soccer freshman midfielder Bill Beresford was in the 18-man match day roster for Chesterfield Football Club against Peterborough United Football Club in a League One contest on Boxing Day 2014 – the British equivalent of playing football on Thanksgiving.

“I warmed up and to be fair, I actually thought I was going to come on and make my debut,” Beresford said. “I was gutted it didn’t end up that way.”

Chesterfield were cruising in the match winning 3-0 against Peterborough and Beresford could sense it was his time.

“There was 20 minutes to go and we had a really good chance, we should have scored but one of the lads put it over the bar,” he said. “They ended up going down the other end and scoring.”

Peterborough scored nine minutes later to pull within a goal and Beresford saw his dream vanish before it ever came to fruition. Beresford said manager Paul Cook elected to bring on more experienced players to see out the victory.

He’s now playing 4,000 miles away for the Phoenix in North Carolina.

Beresford had played for a few different clubs before signing for Chesterfield. At 16, Beresford did what many players in England his age do and signed a two-year scholarship with a professional club’s academy. Beresford signed for Scunthorpe United. As a youth academy player, Beresford trained daily and took courses at a local college to continue his education.

After a year, Beresford was sent out on loan to another professional club’s academy, Sheffield Wednesday, where he featured in several under-18 and under-21 matches. When Beresford returned from loan to Scunthorpe and his scholarship was over, the club did not offer him a professional contract. Beresford was, like many others, without a club.

“That’s when I was basically playing for fun,” Beresford said.

Beresford then caught a bit of luck as he put on a fantastic performance when Paul Cook, the first team manager of Chesterfield, had gone to watch one of Beresford’s teammates in an amateur game. When Cook realized Beresford was without a team, Cook signed him to a temporary contract. Unfortunately for Beresford, nothing materialized — so he decided to continue playing by resuming his education and becoming a student athlete at Elon.

“I always believed my chance will come,” Beresford said. “I’m quite confident in myself with my ability. I think, ‘yeah, I’m not really there at the moment, but I’ll get my chance and I have to take it.’”

Elon senior midfielder James Brace and sophomore defender Jonathan Coleby also came from English academies — Sunderland Association Football Club and Middlesbrough Football Club, respectively. Both grew up in football-rich northeastern England, where everyone has only one thing on their minds.

“The whole culture revolves around the football clubs,” Brace said. “If you go to a Newcastle [United] game or Sunderland game, it’s crazy. Everyone’s just talking about the football, so you’re going to get people who want to play for the team and academies.”

Coleby came from a soccer family, with his dad and grandfather having had long careers in non-league clubs. While parent involvement can be detrimental, Coleby relished the opportunity to follow in his family’s footsteps.

“It was football from day one,” he said. “From my grandad, my dad, all through the family they all played football.”

Brace trained at Sunderland since he was 8 and went full-time as an academy member at 16 like Beresford. Brace credits Sunderland for preparing players for their futures, whether it be in soccer or another profession.

“Sunderland specifically have a good philosophy of if you’re not going to make it as a footballer, what are you going to do next?” Brace said.

Brace said he has returned to Sunderland to speak with players about his move to Elon and informed them that collegiate soccer in the United States is a viable option to continue playing and pursue a university degree.

Like Brace, Beresford was thinking about his future as his contract winded down.

“That was where I was really thinking about what’s best for me for the future,” Beresford said. “Not just the year after, but three, four years down the line. I thought the best decision for me would be going over to the States.”

Beresford plans to major in Finance. He said he’s still getting used to being back in classrooms three years after he graduated high school at 16.

Elon freshman midfielder Amir Berkane had a similar revelation as his contract at Ispwich Town Football Club winded down. Despite being with the club since he was 10, his time was coming to a close. He knew of other players who had secured scholarships to play college soccer and thought that might be an option. After making a highlight video, speaking briefly with Elon head coach Chris Little and taking the SAT in January 2015, Berkane committed to Elon in March.

“Having that experience of not getting what I wanted, I felt like I needed to have a backup in case that ever happens again,” Berkane said.

Little, who is from Swindon, England, said it’s these experiences that forces players to grow up quicker in England.

“They’ve kind of had a door close on them already,” Little said. ”They’ve been with a club and have been told thanks but no thanks. They’ve gone through that period and process of rejection and that forces you to mature.”

Little said all Elon student-athletes who have come from England have excelled. Additionally, with students in England graduating high school at 16, they’ve had two extra years in the real world compared to their U.S. counterparts.

Youth coaches in the U.S. have been making an effort to replicate and build off the academy models of top English and European clubs. The YSC Academy in Wayne, Pennsylvania, has been one of the more progressive examples. It’s home to all of the Union’s U18 development academy team, along with a large number of U16 and U14 players where they train daily and take academic courses.

Little said the academies can drastically reduce the difference in “contact hours” youth players have with their coaches in the United States compared to top talent-producing countries such as Germany, France and Spain.

“We were miles and miles behind,” Little said. “It was a necessary step for the highest level players to try and bridge that gap.”

In 2005, Little was hired by Olympic Development Program (ODP) to be the North Carolina state director of coaching and player development for the North Carolina Youth Soccer Association. ODP was U.S. Soccer’s method of bringing along youth talent into the national teams by creating teams of elite players at state and regional levels.

Russ Peeler, father of Elon senior forward Cooper Vandermaas-Peeler, watched his son move along the ODP system. Vandermaas-Peeler earned a spot in the U18 national team, where he scored against Germany in his only appearance. Peeler agreed with Little that U.S. players — like his son — are at a disadvantage.

Peeler said that top European youth players have the opportunity to play with or against each other at the club academy level when they’re not on national team duty. Meanwhile, U.S. players are forced to work around their school commitments and often live in different parts of the country. It was impossible to compete in terms of contact hours.

“There would be times during his high school season where he would get a letter saying, ‘you need to be California in three weeks to train,’” Peeler said. “Then he’s training with 30 other kids that have never played together and out of that comes a team that’s going to play these guys who are essentially professionals.”

In February 2012, U.S. Soccer Development Academy revealed it would be moving to a 10-month long season starting in the 2012-2013 playing season (August-May). Many players who were playing in newly formed academies were now forced to choose between playing for their local high schools or their academy team.

“This schedule puts our elite players in line with kids in their age group internationally and places the appropriate physical demands on them at this stage in their development,” said Claudio Reyna, U.S. soccer youth technical director, to USsoccer.com. “The addition of as many as 50 extra training sessions per year will greatly enhance the ability of players to work on individual skills and receive advice and instruction from coaches.”

Though despite a more consistent and professional atmosphere for players to train, Little said there are some trade offs. Little said the academies loses the social side of sports such as playing for your school, exhibiting school spirit and playing in front of classmates and other community members.

“It’s completely different when you’re playing in an environment with 10 or 15 parents there and that’s it, than an environment where there’s 500 or 1,000 people from your school and there’s an atmosphere,” Little said.

Elon’s English academy graduates were all quick to point out the sacrifices they made to continue their dreams and were all thankful looking back on the opportunity.

“You’re getting to work on a daily basis with world-class staff, professional premier league coaches,” Sunderland academy graduate Brace said. “You don’t really think about it at the time, but you get trained by some of the best coaches in England really.”

Coleby said the Middlesbrough Academy’s professional atmosphere provided him with a firm grounding in soccer.

“They do things properly,” he said. “They don’t cut corners and they try and run the U18’s and U16’s like the first team which is massive. There’s a big focus in taking pride in what you do and maintaining high standards.”

Despite training alongside professional players making more money in a week than most aspire to make in a year, Coleby still feels young at heart after his time at Middlesbrough.

“I still feel like a kid now, to be honest,” he said. “There’s a certain amount of responsibility and maturity that goes into it, so I think it does make you grow up a lot faster especially being in that professional environment. It’s a cut-throat industry.”