Painting the way through Elon

Art major expresses self with research and art history 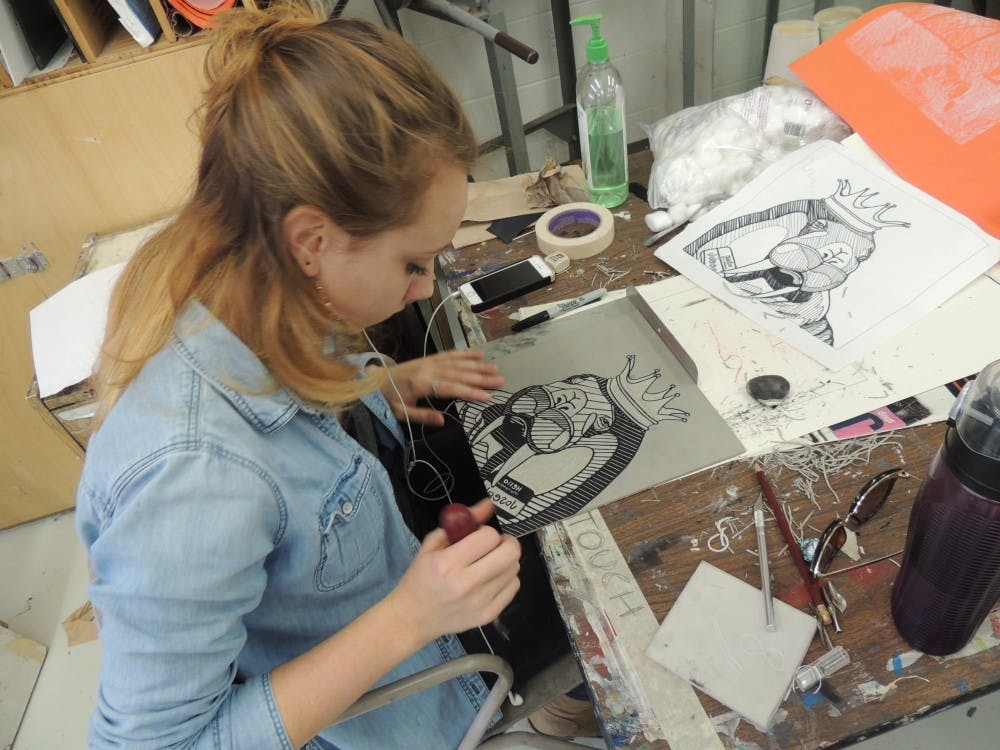 
Junior Hannah Fernandes-Martin creates a stamp of a walrus wearing a crown for her 'Painting II' class.

Junior Hannah Fernandes-Martin has always had a passion for art. Though she has consistently had a flair for all things artistic, when she first arrived at Elon University, she planned on being an English major.

“When I came to college, I really didn’t think I was going to major in art,” Fernandes-Martin said. “But then first semester freshman year I took a drawing class, and I was like, ‘Oh my gosh. I have to be in here all the time. Like, this is what I have to do.’”

After her first drawing class, Fernandes-Martin changed her major to art and art history, and then enrolled in the Bachelor’s of Fine Arts art program.

“Art is what I am really passionate about,” Fernandes-Martin said. “The BFA program is the most rigorous visual art program at Elon, and I knew that I wanted the highest level of challenge I could get.”

The BFA Art program is more intense than the BA Art program. Admission into the program is competitive, requiring a portfolio consisting of 12-15 pieces of original work, an essay, two letters of recommendation — one from a faculty member — and an interview.

Once accepted, the program requires 64 credit hours — 16 more hours than the BA art program, which only requires 48 hours.

“The BFA program is a degree that tends to focus on you the artist, but not you the media-specific person,” said Anne Simpkins, associate professor of art and Fernandes-Martin’s “Painting II” professor. “So the BFA program, unlike the BA, doesn’t really require someone to just work in a single media, but asks the person to be an artist who could potentially work in a lot of different media.”

Throughout the program, Fernandes-Martin has been working on developing her artwork conceptually and in different media than she’s familiar with, mostly in visual graphics.

“As far as my art goes, since coming to college, it focus on the conceptual side of art,” Fernandes-Martin said. “I’m just used to making something that looks pretty, but I definitely have been working more towards making my art conceptual and meaningful so it’s more impactful.”

Since being at Elon, Fernandes-Martin’s works include many self-portraits, a portrait of Bernie Sanders entitled “Bernie,” a  painting of a toy elephant sailing down a river, a painting of an octagon of bees on sunflowers and, most notably, a series of imprints of her feet on watercolor paper entitled, “Observations from an Hour-Long Barefooted Walk Around Elon University.”

That series was the first project she did for her “Time Arts” class. The objective of the assignment was to document an hour in any way. Interpreting the project, she decided to walk barefoot around Elon, and she took an imprint of her feet every five minutes.

“I really hated the process I was going through, but then looking back on the piece, it was the most accurate representation of that hour of my life,” Fernandes-Martin said.

The piece went on to win viewer’s choice in the Student Juried Art Exhibition Oct. 29.

By going through the process of creating “Observations from an Hour-Long Barefooted Walk Around Elon University,” Fernandes-Martin has been trying to branch out from her typical mediums of drawing and painting.

“We’ve talked about the possibility of using different kinds of media as a mode of expression, and she’s exploring printmaking this year and different methods that people work in printmaking,” Simpkins said.

Recently, Fernandes-Martin created a stamp of a walrus wearing a crown and is beginning to create another stamp of an odalisque walrus in front of a Romantic-style background.

Her artistic progression at Elon has helped build her confidence and create more innovative and interesting artwork, apparent to both her friends and teachers.

“I think she has developed a tremendous amount of confidence in herself and her work while at Elon,” said junior and close friend Kyle Lynch. “Her faculty have pushed her to new highs in her artistic abilities, but also showed her new meanings and the contexts behind her favorite works. She has gained an even greater understanding that art can be used as a powerful instrument of change.”

As a junior Honors Fellow, Fernandes-Martin now has the daunting task of choosing a topic to conduct research for her thesis project. It’s a difficult process, and while most Honors Fellows propose in the fall of their junior year, she is planning to propose in the spring after deciding to do research in solely art and not art history.

“It’s interesting doing an art research project because I’m not just going to be writing a paper, I’m going to be creating a body of work.” Fernandes-Martin said. “You have to come up with ideas and you need to think about which media you’re using and the best way to construe your message in some kind of visual or not visual form.”

Her inspiration came from her “Intro to Digital Art” class freshman year, when former professor Juan Obando, showed the class one of his projects called the “Museum Mixtape.”

As a part of the project, Obando brought local rappers into museums and asked them to freestyle a rap about the pieces on display.

“The whole piece embodied this disconnect between the high prestige of museums and institutions and the distance between that and normal people who look at modern and contemporary art and are just like, ‘I have no idea what this means,’” Fernandes-Martin said. “It’s critiquing the pretentiousness of art.”

Inspired by that project, she plans on tackling the topic of museums as institutions — how there are groups excluded from museums, both in the patrons who attend them and the artists featured in them — and how museums can grow.

While her plans for research are not yet complete, Fernandes-Martin’s passion for art is contagious.

“I think it’s a certain fearless quality that she’s able to work without worrying about what the final outcome will look like and in that way it serves her well for exploration and creativity,” Simpkins said.