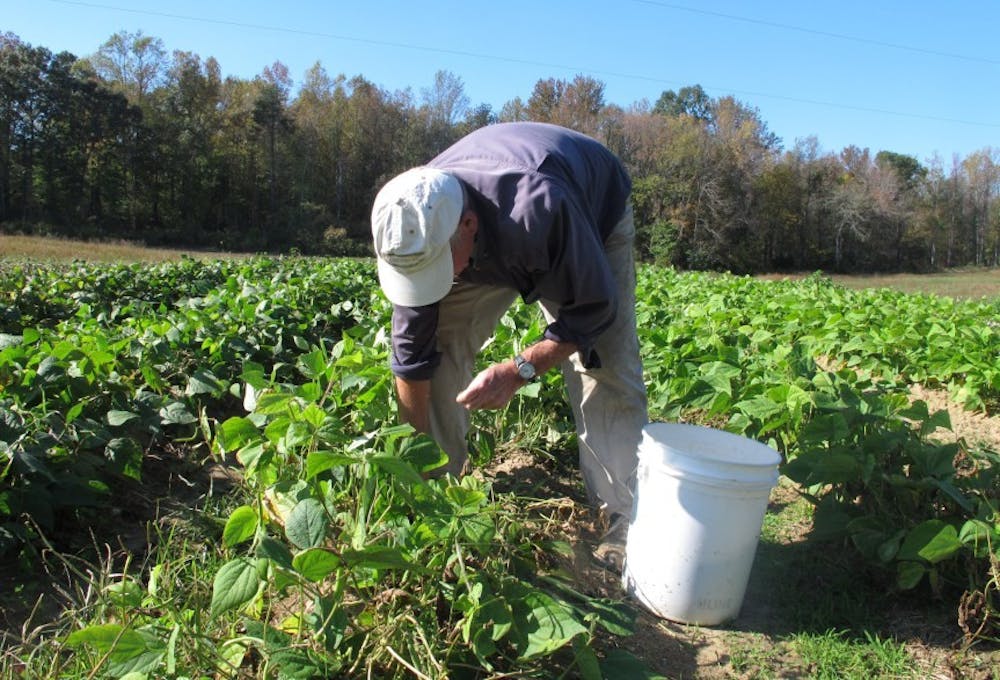 It was Jan. 1, 1994, when TS Designs president Eric Henry received news that would dramatically alter the future of his small business: the North American Free Trade Agreement (NAFTA) came into effect.

“NAFTA had a devastating impact on my business,” Henry said. “I worked for brands like Nike and Adidas. We employed over 100 people, were profitable, paid good wages and then we had to lay off 80 people.”

Since the trade agreement between the United States, Canada and Mexico came into effect, Henry has witnessed a rapid industrialization movement — which has often come at the expense of local small businesses.

Small businesses, which are defined as enterprises with less than 100 employees, have accounted for a decreasing proportion of total employment over the last several years, according to the U.S. Census Bureau's 2012 Statistics of U.S. Businesses.

Like many small businesses, TS Designs has struggled to compete in an increasingly global marketplace.

“I saw my business and community get completely devastated and it started impacting local businesses,” Henry said. “Walmart and big businesses were utilizing the global services.”

While small businesses are dwindling over time, large-scale ones are continuously growing.

One industry globalization has particularly affected in NorthCarolina is textiles. The most recent U.S. Census indicated a 28 percent decline in the number of textile mills between 2008 and 2012. Between 2002 and 2012, textile manufacturing has declined precipitously in some of the top 10 states.

North Carolina had the second-most jobs in the textile industry in 2012 with 34,786, according to the Congressional Research Service. But this figure marked a 64 percent decline since 2002.

Henry said the textile industry’s decline has resulted, in part, from businesses manufacturing their goods abroad and marketing them to consumers to buy at cheaper prices.

“Brands are driving the marketplace,” Henry said. “They’re making so much money the way things are today. Brands like Nike have millions of dollars in advertising. When you have that kind of money, it’s easy to keep people distracted.”

Getting the message heard

Small businesses often face an uphill battle when trying to reach a mass audience. According to Marketing Land, advertising revenues have spiked with the proliferation of mobile communication and social media. Advertisers also use television to promote their goods and services.

But advertising comes with a hefty price tag.

A 30-second advertisement in the 2016 Super Bowl is selling for as much as $5 million. A 30-second ad during the CBS sitcom "The Big Bang Theory" costs more than $300,000. While large businesses can afford the expenses of reaching large audiences, small ones cannot.

Clay Smith and Nancy Joyner, owners and operators of Redbud Farm in Burlington, launched a Facebook page a few years ago to reach customers.

Smith and Joyner relied on their organic certification in 2009 to market their farm as a healthier alternative to supermarkets. They participate in the Western Wake and Elon farmers markets to promote other vendors and showcase their healthier goods.

“A lot of our marketing is about building long-term relationships with customers so folks come back to our stand and to other stands too,” Smith said. “The vendors really try to support one another. The Elon market is not as large, but the thing that we like about it is that it’s really local.”

The Elon farmers market typically features about 10 vendors and is located in a smaller area, which helps foster a more inclusive culture for vendors.

But at the end of the day, Smith relies more on his face-to-face interactions with consumers.

“In terms of reaching out to folks, it’s generally word of mouth for us,” Smith said. “We don’t do a lot of advertising."

Company Shops Market, Burlington’s co-op, has experienced steady growth since opening its doors in May 2011, but its progress in competing against local grocery chains such as Harris Teeter, Lowe’s and Food Lion and big discount stores such as Walmart and Costco has been gradual.

Company Shops Market's 2014 annual report noted a “drawdown on our cash while our current liabilities continue to increase slightly” and concluded: “Both of these trends need to be and can be reversed by increasing sales.”

“We have people living in the apartment building right down the street who still haven’t heard about us,” Sharpe said. “We’re trying to do everything we can to increase awareness. We’ll blast social media and we’ll do emails, flyers and posters. It’s slowly getting out there.”

Come to the co-op this Friday for downtown's 4th Friday! We'll have music, burgers, ice cream from The Scoop Shack and draft beer!

Wright and Sharpe argue it is virtually impossible to compete with fast food chains. McDonald’s Dollar Menu currently features a fruit and yogurt parfait, double cheeseburger and chicken nuggets along with much more, whereas the Company Shops deli menu features a variety of sandwiches starting around $8.

The local food movement has also extended into the Elon University community.

Peter Ustach, co-owner of Pandora's Pies and The Fat Frogg, graduated Elon in 2009 and has devoted his businesses to purchasing local goods.

“What a lot of students don’t see is the local support we get,” Ustach said. “The Fat Frogg runs on 60 percent local, while Pandora’s Pies is more 50-50 split in the summertime.”

Ustach has worked with local farmers, including Smith and Joyner of Redbud Farm.

While Ustach says he makes concerted efforts to reach out to more local businesses for goods, he admits it would not be possible to be completely local. Nevertheless, he recognizes the importance of transparency.

Food is central to Pandora’s Pies and The Fat Frogg, but the relationship within the community extends beyond the dinner table. The Fat Frogg hosts trivia nights once a week and live music on Fridays and Saturdays.

This increased interaction with consumers allows him to generate higher profits.

While it has taken a bit of time for Pandora’s Pies and The Fat Frogg to gain traction, The Oak House— a coffee shop and wine bar — has become quite popular since opening its doors Sept. 24, 2014.

Since opening The Oak House, owner Phil Smithhas allowed Elon students to film projects after closing time and hold profit-share events. When news spread Starbucks would come to campus in time for the 2015-2016 school year, the university received much backlash from students.

Several students expressed their support for The Oak House and did not want the small business facing increased competition. When the university decided to halt Elon Dining expansion for Starbucks, Smith immediately felt relieved.

Smith attributes part of this success to the local food movement.

The Oak House gets its milk from Homeland Creamery, a family farm located about 15 miles off campus in Julian. Smith also pays a premium for high-quality pastries by ordering muffins from Tasty Bakery in Graham.

“When it’s locally made, I think the people making it care about what they’re making because it’s their neighbors, friends and peers who are benefitting,” Smith said. “It also keeps the money in the local economy.”

While Smith said he could pay around 25 cents a muffin through BJ’s Wholesale or Sam’s Club, he prefers having the muffins made from scratch and not in a premade container.

But sustaining his business in a college town over the summer has proven to be quite the challenge.

While local businesses grapple with the challenges of staying in business after the school year, on-campus dining facilities struggle to accommodate student demands for increased local food.

Defining 'local' out of state

Elon Dining lists “Buying Locally” in bold at the top of its sustainability webpage.

But the word “local” has a pretty broad meaning in the context of Elon Dining. According to Heather Krieger, marketing coordinator for Elon Dining, local is defined for tracking purposes within 250 miles of campus.

Dining Services is also a member of the NC 10% Campaign.

“We pledge to purchase 10 percent of our items from North Carolina,” Krieger said.

While Elon Dining notes on its Sustainability page it purchased more than 11 percent of its food locally last year, there was no mention that figure came only from North Carolina agricultural facilities.

“Everyone has a different idea of what is local,” Krieger said. “We try to abide by that 250, but then it’s within the state or within the region. If we can’t get it there, then we have to go outside of our local range. What we track and promote is usually within that 250-mile radius of campus.”

With the word “local” defined as a 250-mile radius, food can come from parts of Virginia, South Carolina, West Virginia, Tennessee and Kentucky.

Dining Services’ map “From Local Farms to Your Forks” reveals 21 different sources of food in North Carolina. Of those 21 locations, only one is located in Alamance County and three within a 50-mile radius of campus.

Krieger said the Elon Dining is committed to sourcing produce locally whenever possible but the logistics can be challenging given the large student population on meal plan and the various health and safety guidelines Aramark must adhere to.

Although she said she wasn’t permitted to provide specific data on the number of students on meal plans, Krieger said local markets could not feed the student entire student population.

“I have students approach me and say, ‘We have a farmers market right down the corner. Why can’t we buy from the farmers market?’” Krieger said. “And I say, ‘With a farmers market, if Elon Dining bought all of it, it would feed one dining hall during one meal period.'"

She also mentioned the extensive process in place for the existing distributors and acquiring additional distributors. According to Krieger, Elon Dining has middlemen who work through that process.

Elon University itself is not directly involved in the decision-making process for bringing national vendors to campus. Rather, Aramark makes all final decisions.

In a 10-page Vendor Policy Committee Report, the university outlined its limited influence in deciding which vendors come to campus.

“The university provides the facilities for Aramark’s operations on campus and participates indirectly in the decision-making process around national vendors that operate on campus,” said a portion of the report.

Chris Fulkerson, Elon’s assistant vice president for administrative services, explained how the university recommended Aramark add a Biscuitville location to campus because the founders had an existing relationship with Elon. But the process took five to six years before Biscuitville finally arrived on campus.

Although Elon makes recommendations for large vendors, its limited influence creates a lengthy process for local businesses to come to campus.

At the end of 2015, TS Designs president Eric Henry feels cautiously optimistic about the fate of his business.

Following NAFTA, he witnessed a rapid consumer demand for cheap products. But now, something is beginning to change.

“That local food movement is getting more interest with Millennials," Henry said.

Michael Shuman, an expert in economics and author of “Going Local,” said people are basing their purchasing decisions on more than just cost.

While Henry says the progress toward buying local has been slow, he recognizes a gradual resurgence is approaching.

“When stuff is cheaper, sometimes your neighbor just lost his job,” Henry said. “Now I see younger people through Elon University starting to see the value on price.”