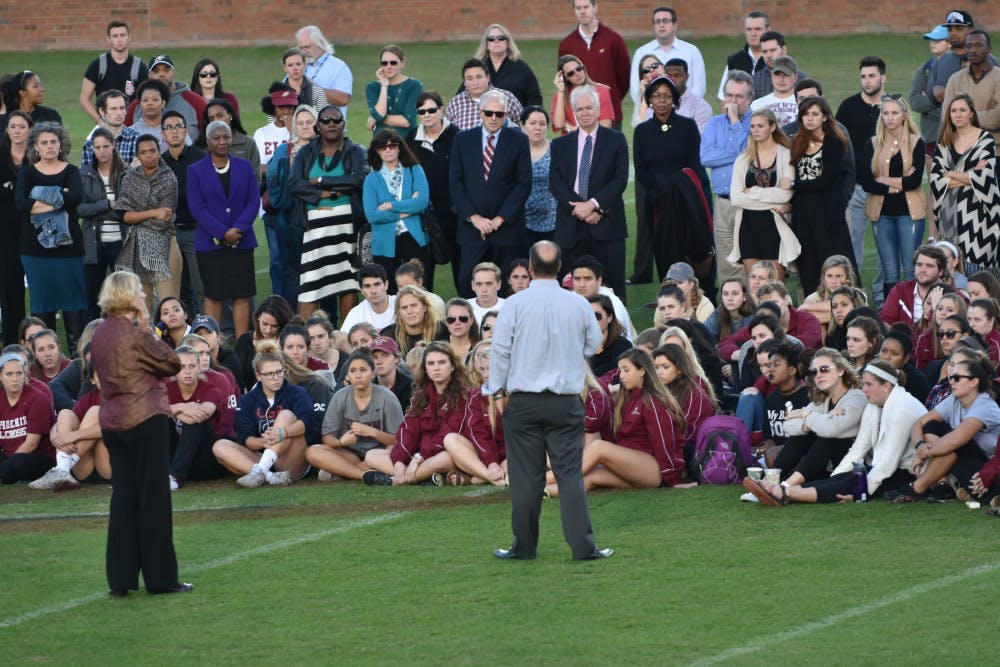 No one said anything, because no one knew what to say.

No cameras flashed. No cellphones glowed. The only lights were the streetlights and the dozens of candles brought by those in attendance, and of the shooting star one person saw as he arrived.

Gathered in remembrance of junior Demitri Allison, a wide receiver on the Elon University football team, hundreds stood in silence.

Then, they prayed. They held hands. They cried.

They remembered their friend, teammate and classmate hours after he committed suicide, according to a UNC Police report, by holding an impromptu midnight candlelit vigil outside the stadium he used to play on Saturday afternoons.

And soon enough, they laughed.

They grinned at Allison's smile, one that could invigorate an entire room. They chuckled at the time he donned a Superman cape for a dunk contest. They roared with laughter about the time he won a ton of his friends' money in a video game tournament.

No one knew who organized this event, but it didn't matter. Rather, it showed how many people Allison influenced in his two-and-a-half years at Elon.

"Everybody just came out, and it was just a great moment to see everybody he touched."

Allison missed team breakfast and classes Tuesday morning, something Jana Lynn Patterson, dean of student health and wellness, said was out of character.

Allison's friends, family and teammates asked police to look for him because "they were concerned for his well-being and emotional state," according to an email from Smith Jackson, vice president for student life.

According to Patterson, messages from Allison with friends on campus Wednesday morning escalated their concerns and search efforts. His friends hurried to the University of North Carolina at Chapel Hill to search for him as investigators pinged his phone to try and track him down.

Allison, 21, had fallen from the 10-story building, and was transported to UNC Hospitals, where he died.

The Elon coaching staff told the team after practice Wednesday.

Around midnight Thursday, about 150 people arrived at Rhodes Stadium with candles to honor Allison.

"I was thankful that, when the news of Demitri's passing came, we were together," said Elon football coach Rich Skrosky. "The emotions that we experienced (Wednesday) night as a family, I'll never experience that again, and I've been doing this for going on 30 years."

With a crowd of about 400 convening on the Rhodes Stadium field Thursday afternoon, the football team filed in, hand in hand, to begin a "Gathering of Friends" in Allison's memory.

Earlier Thursday, Lisa Hartman expressed gratitude for five players -- Silas, Lennon, Dondre Howell, Demetrius Oliver and Efrim Borders -- who were by her side Wednesday in the wake of Allison's death.

"[Allison] was an extremely kind and gentle, thoughtful person who was so humble," Hartman said. "I always felt like when Demitri came into our life, he was just a blessing from above to us."

Friends and teammates shared stories of Allison, many recalling his smile that was, more than once, described as "infectious."

There was talk of his many trips to Subway, where he loved to eat, and how he'd often ask for rides to practice and class.

Skrosky moved around the field, patting players and former players on the back, providing the literal shoulder for them to cry on.

"This is a man that will be missed by many," said Dave Blank, director of athletics. "It's been a tough 24 hours with reflection and sorrow, particularly with men on the football team. I couldn't be more proud of how they've handled this.

"If you could hear anything that was said, what you heard is that Demitri gave us something to hang onto. Maybe that's the best he thought he could do. Maybe in his moment, he was trying to give us his special gift, and that is each other and love. If you were in our football locker room, you would've felt that."

And there hundreds of people were, right on the 50-yard line, where Allison would line up on Saturdays in maroon and gold, feeling his presence still with them.

Allison, who played at Southlake Christian High School, north of Charlotte, saw action in 10 games as an Elon freshman in 2013, making one start and catching one touchdown pass.

Allison started all 12 of Elon's games in 2014, finishing second on the team with 55 receptions and 525 receiving yards.

He played in all nine Elon games this season, catching 12 passes for 123 yards. He didn't record a reception in the last two games he played, against Stony Brook and William & Mary.

Standing on the same field where Elon lost to William & Mary just last Saturday, junior safety Asunji Maddox led a prayer to conclude the gathering shortly after "Amazing Grace" could be heard playing on church bells within earshot.

"A lot of sadness right now, a lot of pain," said senior defensive back Miles Williams. "A lot of hurt for my teammates and coaching staff and Elon community. At the same time, there's some joy. We know that Demitri's in a better place right now. He wants us to be happy and rejoice and remember the good times of his life, and the impact he made on all of us.

"Being able to get on that field and listen to the thoughts and reflections and memories that so many people had of his life brought tears in my eyes and other people's eyes. A lot of them were tears of joy."

Elon didn't officially announce until early Thursday evening that it would travel to Saturday's scheduled football game at Maine.

Now, the game becomes another step in the grieving process.

At Elon, there are a number of resources available for those feeling overwhelmed.

Counseling Services, which can be reached at 336-278-7280, are free and open from 8 a.m. to 5 p.m. weekdays. They're located in the R.N. Ellington Center for Health and Wellness on South Campus.

Elon also provides anonymous mental health screenings online that determine if you or a friend may need to immediately contact a doctor or mental health professional.

Allison's friends say they wish they could've helped him. Williams said they tried to make Thursday a normal day, but knew there was simply no way they could.

"When (Allison) walked into a room and started smiling, it would just bring instant warmth to your heart," junior Alaina Hall said after the event. "It's hard knowing that he's not here anymore, and it's hard knowing that I'm missing out on any time with him. That's probably the hardest thing I'm going through right now."

Silas spoke of the power the Elon community has when dealing with tragedy, and how countless people approached him and his teammates Thursday to offer their condolences, even if they didn't know Allison.

That, and the stories shared, touched Silas. Allison's memory won't leave him next week, month, year.

"He wouldn't want any of us to be sad," Silas said. "He would want us to be happy. He would just want all of us to be successful.

"I'm just remembering all the good times and wishing he was still here. I'm going to do big things for him."