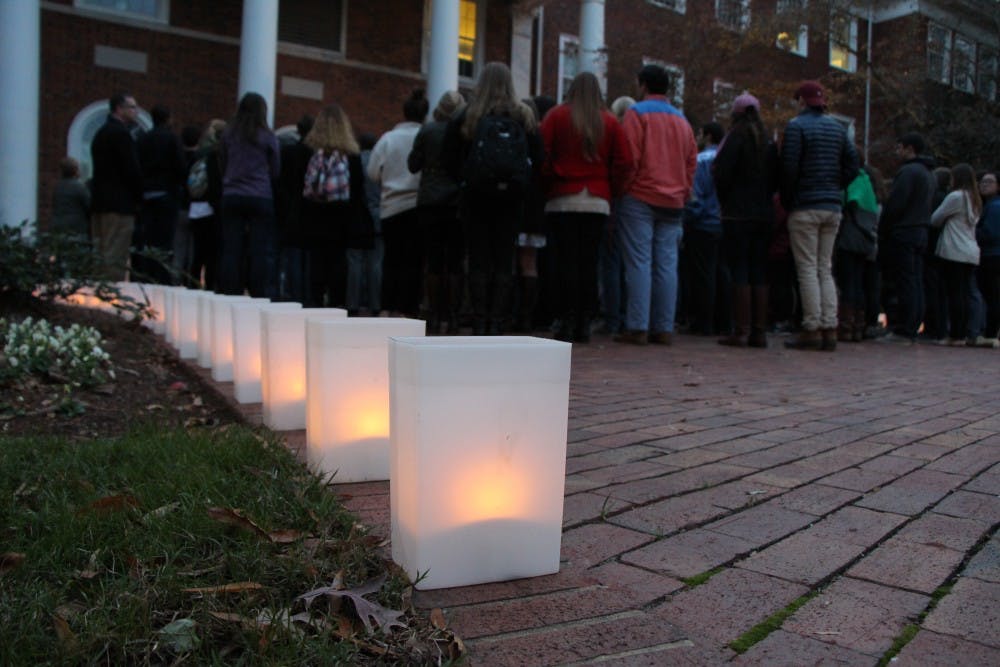 
Dozens gathered outside Alamance on a chilly Sunday evening to pay their respects for the victims of the Paris attacks.

For one long moment outside Elon University's Alamance Building Sunday night, dozens stood in silence, pained and confused faces illuminated by 130 candles, each representing one of the dead in the Paris terror attacks Nov. 13.

In opening the vigil, President Leo Lambert invoked not only Paris, but also Beirut, where 40 died in another ISIS attack the day before, and Egypt, where a Russian jet went down from what has been deemed a likely ISIS bombing, killing all 224 passengers and crew.

After the Paris attacks, Facebook activated its "Safety Check" feature, previously used for natural disasters and not implemented in the Beirut bombings. The social network also gave users the option to paint their profile picture with the red, white and blue stripes of the French flag. The outpouring online and intense media coverage has led some to criticize how the West weighs tragedies in the Middle East.

"We know much more human suffering is likely ahead," Lambert said. He added, "We stand here worried for the world our children and grandchildren will inherit ... It is important to ask, 'What difference can I make?' And I'm talking about actions deeper than changing your Facebook profile picture."

In opening and closing the vigil, University Chaplain Jan Fuller urged people to "remember that each light is a life" and that each life lost matters. According to news reports, 129 have been confirmed dead as of publication, but dozens more are in critical condition in French hospitals.

In the open mic session that followed, during which more than a dozen spoke, Kenneth Brown Jr., Class of 2019 president, said not knowing is the hardest part.

"It's going to take a whole for us to figure out why," Brown said. "The universe gained 130 new stars. Heaven gained 130 new angels, and events like these teach us that life is short."

Shoulders draped with a French flag and joined by two friends, one of whom said she lost a friend in the attacks, junior Theo Hardy compelled the crowd to not associate the atrocity with the religion of Islam.

"There's no words to describe what happened," Hardy said. "These people, they're not Muslims, so please don't say they are."

The attacks have opened a long-running rift in the United States and elsewhere over the labeling of acts of terrorism. Republican presidential candidate Jeb Bush tweeted, "we are at war with radical Islamic terrorism" during the Democratic debate Nov. 14.

Joel Harter, associate chaplain for Protestant life, prayed for an "end to Islamophobia and hateful mistrust" of all people during the vigil.