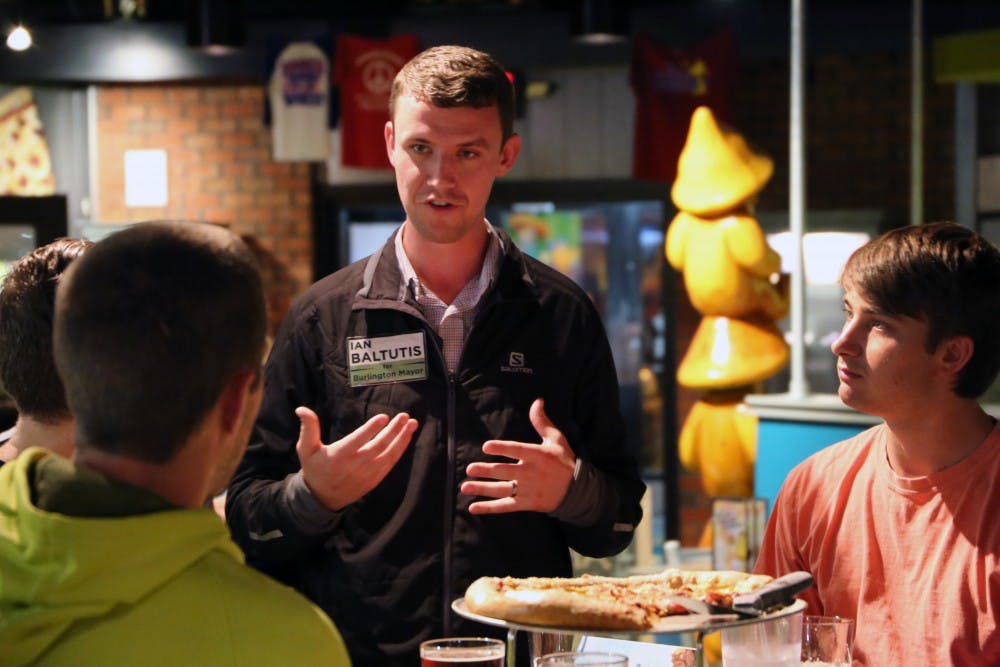 Tuesday night Ian Baltutis woke his mother up with a phone call. But, he had a good reason to call: he had just been elected Mayor of Burlington, North Carolina.

In his election event at Mellow Mushroom in Burlington, Baltutis, a class of 2008 Elon graduate, thanked his supporters in attendance, saying, "I am so excited to have people who made the commitment to come out and vote and make this the year. We make positive change in Burlington and that we really say that Burlington is ready for forward progress and writing a new chapter for our future."

This was Baltutis's second try for Burlington's Mayoral seat. He lost to Wall in 2013, but said that the experience helped his this time around.

"We have experienced loss, and it has not stopped us," he said. "This is really recognition that what we've been fighting for since 2013 has been meaningful to people and is what they want to see happen continually in our city."

A major part of Baltutis's campaign was going door-to-door in neighborhoods across and engaging citizens in conversations about where they want Burlington to go.

"The most powerful thing to me in this campaign is meaningful conversations," Baltutis said. "And every time that you see one of those [Baltutis for Mayor] yard signs in someone's yard, you know that I stood on that front porch and talked to that individual voter. Each one of those signs represents a conversation with a voter about the future of Burlington."

Baltutis continued canvassing neighborhoods until right when voting ended. He said that he had visited about 300 houses on election day.

But according to Baltutis, the work is just beginning.

"We won because people believe in vision," he said. "We set the bar higher for Burlington. We said what do we really want our city to be? And people believe in what we're trying to do. We do not want to let them down. We want them engaged along every step of the next two years and hopefully beyond because the future of Burlington is in the hands of the people of Burlington."

When he goes into office in little over a month, Baltutis said there is going to be a focus on improving the economic outlook for all citizens.

"We're watching cities all around us grow and prosper, and folks are asking why isn't Burlington doing that too?" He said. "So we have a bit of a catch-up game to play and we need to make sure that happens."

And he said for that to happen, there needs to be an increase in well-paying jobs in the community.

In other elections across the area, incumbent Burlington City Council members Kathy Hykes and Bob Ward held off challengers Kendal McBroom and Patrick Mills to retain their seats.

In the Elon Board of Alderman elections, incumbents Mark Greene, Ron Klepcyk and John Peterson held off newcomer Jim Chanas.