Follow along as the Phoenix hosts Winthrop in the first round of the NCAA Tournament. 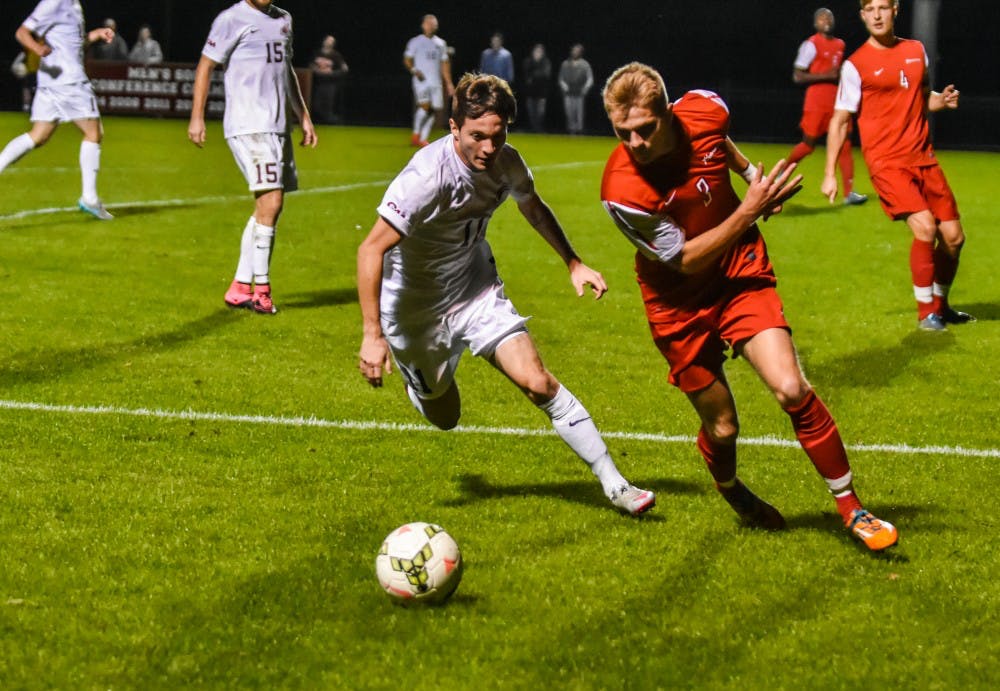 Managing Editor Tommy Hamzik is at Rudd Field as the Elon University men's soccer team hosts Winthrop University in the first round of the NCAA Tournament. Follow here for a live blog as the game goes on.

86' — Cooper Vandermaas-Peeler adds one more goal to put Elon up 3-0. Caue Da Silva had the assist. That almost entirely seals it.

81' — Rather loud "I believe that we will win" cheer erupts from the bleachers.

73' — Elon's Matthew Jegier dives for a save on a shot by Jordan Soddart. Jegier has seven saves tonight. Elon up 1-0.

65' — Elon's corner kick bounces around in the box but to no avail. Prior to the corner, Caue Da Silva's shot was deflected.

61' — A big thank you to Jonathan Miller, director of the Phoenix Club, for helping improve our line of sight.

54' — Cooper Vandermaas-Peeler whistled for offsides. He scored shortly after the referee blew his whistle.

46' — Second half is underway from Rudd Field with Elon up 1-0 on Winthrop. Myself and Burlington Times-News correspondent Bryan Anderson can't see a thing from this media seating.

8:09 p.m. — Good number of fans have migrated to our end of the field, which is going to be Elon's goal in the second half. Less than two minutes until the second half starts.

8:00 p.m. — Per some nice research by Jordan Spritzer, our assistant sports editor, who finds that's the first goal that Winthrop has allowed in five matches.

7:58 p.m. — Some halftime stats: Winthrop has six shots to Elon's three, but two of Elon's are on-goal whereas just one of Winthrop's is. Each team had one corner kick, and each goalkeeper made one save,

HALF — Elon leads Winthrop 1-0 after 45 minutes. Lone goal came from James Brace in the 34th minute.

40' — Can't see much of the near goal from this media tent I'm sitting under. And by that I mean I can't see a single thing on the side of the field near the benches.

34' — Elon strikes first. James Brace scores on a cross from Jaiden Fortune as the Phoenix takes a 1-0 lead on Winthrop. Fortune's cross was pretty, and Brace essentially slid into it.

32' — Now we're at four yellow cards in the match, three for Winthrop. This one given to James Skonicki.

30' — It's not particularly surprising for an NCAA Tournament game, but the play is rather physical tonight. And chippy. As I typed that, Winthrop's C.J. Miller is issued a yellow card for a hard foul on Taylor Adler. That's the third yellow card of the match.

28' — Freshman Jaiden Fortune, a two-time CAA Rookie of the Week, checks into the game for Elon.

18' — A solid crowd has filed into Rudd Field. It's not at the 2013 level, but it's growing toward that with fans still streaming in. The game is still scoreless.

10' — Elon corner kick deflected away by a Winthrop defender.

8' — Winthrop's Charles Coulson is issued a yellow card for a foul around midfield. Eagles have the game's lone shot so far.

4' — Miguel Salazar draws a yellow card. The foul was dangerously close to the box. Could've been a penalty kick.

1' — Foul on Elon just 15 seconds in. Winthrop's Kyle Kennedy was down for a minute but walked off the field under his own power.

6:42 p.m. — Fans are starting to file in at Rudd. I'm on my second cheeseburger. Pepper jack cheese is treating me well.

6:15 p.m. — Greetings from Rudd Field about 45 minutes before kick. There aren't many fans here yet, but a large crowd is expected. When Elon hosted Clemson University in the 2013 NCAA Tournament, 3,348 people were in attendance.