What's in a set piece? 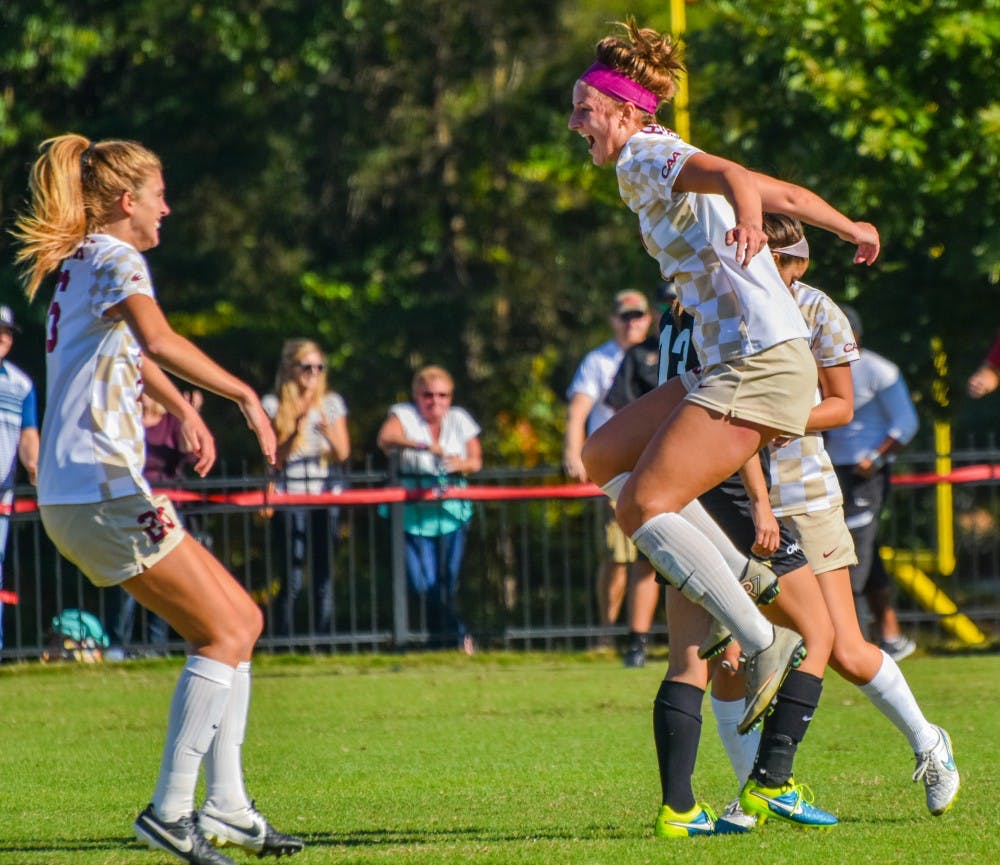 It’s a pretty common occurrence in a soccer match. Someone might get fouled, or the ball might get kicked out of bounds, resulting in a corner kick. Players begin milling about, trying to get in the right position so that when the ball is kicked, they can do their best to put the ball in the back of the net.

It’s called a set piece, and it’s something the Elon University women’s soccer team knows a thing or two about.

“We have a lot of kids that can strike a ball very well, and in the set piece equation, the first step is being able to strike a ball well, you know, putting the ball where it needs to be,” said head coach Chris Neal. “There are so many variables involved in all the different types of set pieces. You’ve got short free kicks, long free kicks, corner kicks … each set piece is uniquely different depending on the distance, the angle and where the defenders are standing.”

The difficulty of scoring off a set piece is one that is often taken for granted in the game of soccer, most likely because it’s so common.

“More than 30 percent of most goals in most leagues are scored on set pieces, so we have to devote a large amount of our time to it,” Neal said. “To not spend that amount of time on training would be naive.”

The set piece has been one of the most effective ways for the Phoenix to score this season. Of the 25 goals the team has scored, eight were directly off a free kick or corner kick, right around the 30 percent mark. That doesn’t even include the “second and third-phase” goals Neal pointed out, goals that don’t come directly off a set piece but occur as a continuation of a set piece.

“I think a big thing for us, especially going into this year, was knowing that we really had to take advantage of the opportunities that we get on set pieces because they are extremely important and put us in a great position to score,” Insley said. “We put a lot of emphasis on just timing the services in, timing the runs and making sure everything is on frame in order to give everyone the best possible position to score.”

Insley has been much more prevalent in Elon’s set piece equation this season in contrast to last. Her only goal last season came off a free kick in the season opener, a moment where she began to see what the coaches had been telling her all along.

A plethora of moving parts

Players looking only at the ball when it’s kicked miss out on all the moving parts that go into a successful set piece.

“If I’m the one responsible for taking it, I realize that the main priority is getting it on frame,” Insley said. “If it’s not on frame, there’s no way of scoring for either myself or a teammate of mine, so that’s the biggest priority in setting up for a free kick.”

Neal also stressed that knowing the value of the opportunity a set piece represents has played a huge role in the amount of set piece goals.

“They know that they’re good at [set pieces],” Neal said. “And they know it’s a great opportunity for them to win the game.”

More than just a kick

The other point that many tend to forget is that a set piece requires more than the kick.

“It’s a combination of service, intelligent runs, and then there’s the variable of everybody doing their job,” Neal said. “There are some people who aren’t there to serve it, some people that aren’t there to initially assess that first ball, but there are people there who are sort of our scavengers that are sort of there to pick up the pieces and they have to be in the right places.”

For Insley, delivering a good ball is pointless if her teammates are not able to get to it.

“If the ball gets where it needs to be but there’s no runners there, then it’s a worthless free kick in the same sense as if the ball doesn’t get there but the runners do,” Insley said. “On both sides of it, everyone needs to be perfect and know what their role is and know what to do in order to score.”

The biggest element of a free kick, according to Insley, is trust.

“It’s really important that each of us trusts everyone else that’s on the field at that time, and everyone knows what their role is off set pieces,” she said. “When that happens, even if it’s not the best ball in, we have to trust that our teammates will do everything they can in order to re-direct that ball into an area that will be more dangerous and have a better likelihood of getting on goal.