Elon fought hard, but fell to Towson in 4 sets 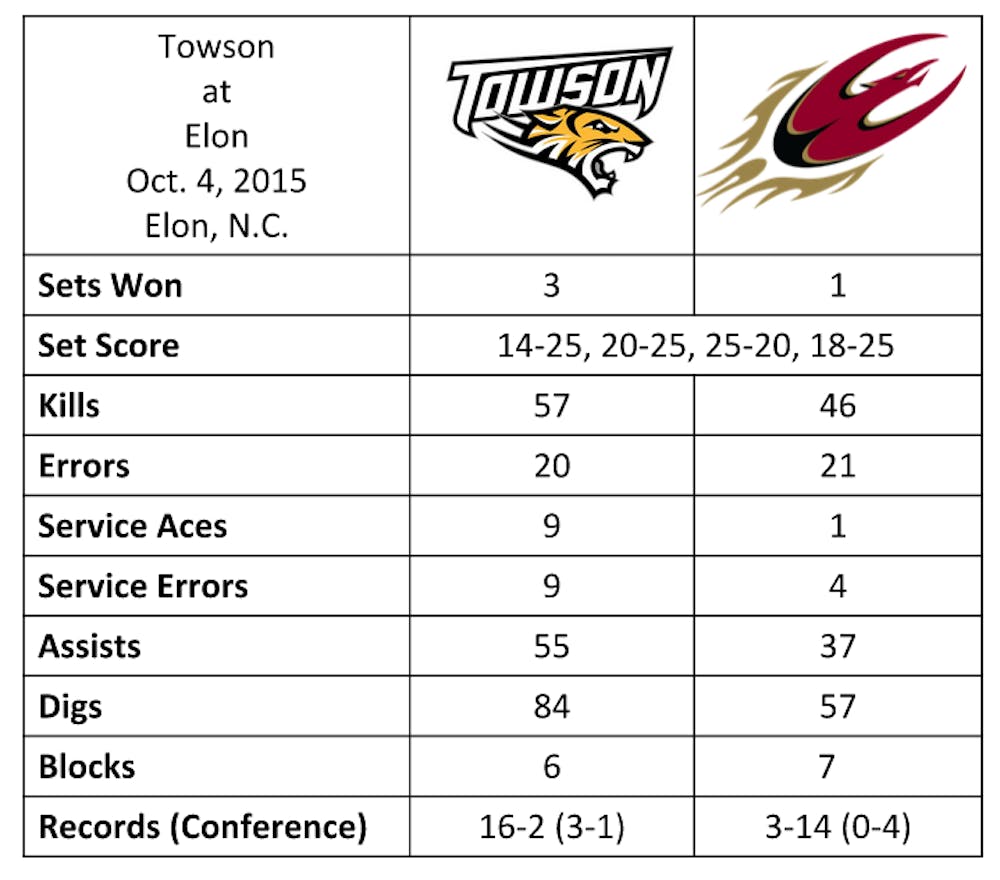 "Our offense is getting better and better, and it's nice to see," head coach Mary Tendler said. "For the first three sets tonight, our hitting efficiency was [getting] higher and higher."

Elon struggled to find a rhythm in the first set. With the score tied 4-4, the Phoenix offense stalled, and the Tigers were quickly up by 6, 10-4. Towson pulled away, and the Phoenix was unable to respond, as the Tigers went on to win the set, 25-14, overpowering the Phoenix with 15 kills.

The second set started better for Elon, as they battled evenly up until 13-13. With the score 17-16, the Tigers pulled ahead by four, 20-16, after back-to-back kills by freshman outside hitter Jocelyn Kuilan and junior outside hitter Jessica Lewis. The Phoenix could not recover and dropped the second set, 25-20.

Elon's offense came alive in set number three. After trailing for most of the first two sets, the Phoenix came out and took an early 9-5 lead, forcing the Tigers to take an early timeout. After the timeout, Elon extended its lead to six, 12-6. Elon's momentum continued throughout the rest of the set, even as Towson pulled within three. The Phoenix won the third set, 25-20.

The teams battled early in set four for the lead. But Towson started to pull away from the Phoenix, taking a four point lead, 11-7, and forcing Elon to call a timeout. Although Elon recovered for a time and tied the match at 13-13 on an attack error by Towson, the Tigers would again pull away, winning the set 25-18, and the match, 3-1.

"Our serves were aggressive, that was a plus," said junior middle blocker Ally Karle, who finished with 12 kills. "We had a lot of options going, which was great, too."