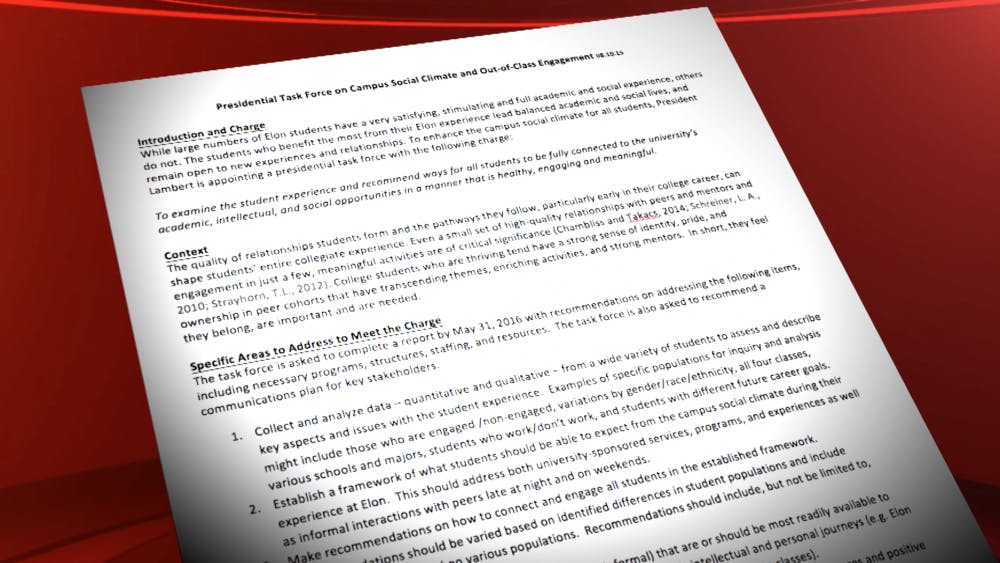 It's called The Presidential Task Force on Campus Social Climate and out of Class Engagement. It's also known as President Lambert's Passion Project. According to Dr. Naeemah Clark, the co-chair of the task force, the idea started when Lambert was talking to students around campus.

"We're really looking. There are some students who aren't doing anything, who are watching TV all day and so how are we reaching out to those students?" Clark said. "What do those students want to do to make themselves more connected to the university climate, university culture?"

Clark got involved when she received a call from Lambert over the summer. Although at first she thought she was in trouble, she couldn't be more pleased that he asked her to join the task force, and there was one main point that Lambert made that stood out to her.

Clark said that most campuses start these initiatives after an increase in negative drinking behavior or an increase of hospitalizations of students, but this isn't the case for Elon.

"There wasn't like a moment where we thought oh my gosh the students are drinking too much we have to stop that. That's not what happened," Clark said. "Some campuses work when there is an incident of increased drinking behaviors that actually happen."

The first step of the task force is to look at overall student life and see what students actually want and need. Currently, the task force is in its research stage. They will be sending out surveys and begin additional research this week. There are a few things that Clark has seen that would be an easy fix. One example would be putting a sign outside the Hubb so that students know what's inside. Another example of potential change involves Spaces.

"Right now we have policies on campus that say that a student can't just reserve a space on campus," Clark said. "You have to have a faculty advisor signature. You have to have an organization that you're affiliated with. Well what if you want to have a knitting club?"

And besides Spaces another issue comes up with trying to gather in the dorms.

"Some of them don't have common rooms and so students are meeting in laundry rooms to hang out. Is that really what we want students to be doing? Hanging out in laundry rooms?" Clark said with a laugh.

For Clark, college is about making lasting relationships. The task force is hoping to make it easier for everyone on campus to make those connections and Clark made it a point to emphasize that they really need student involvement to truly make a difference for this campus. If they don't know what is wrong, they can't fix it. So she asks that students take the surveys seriously so that their opinions can be heard.