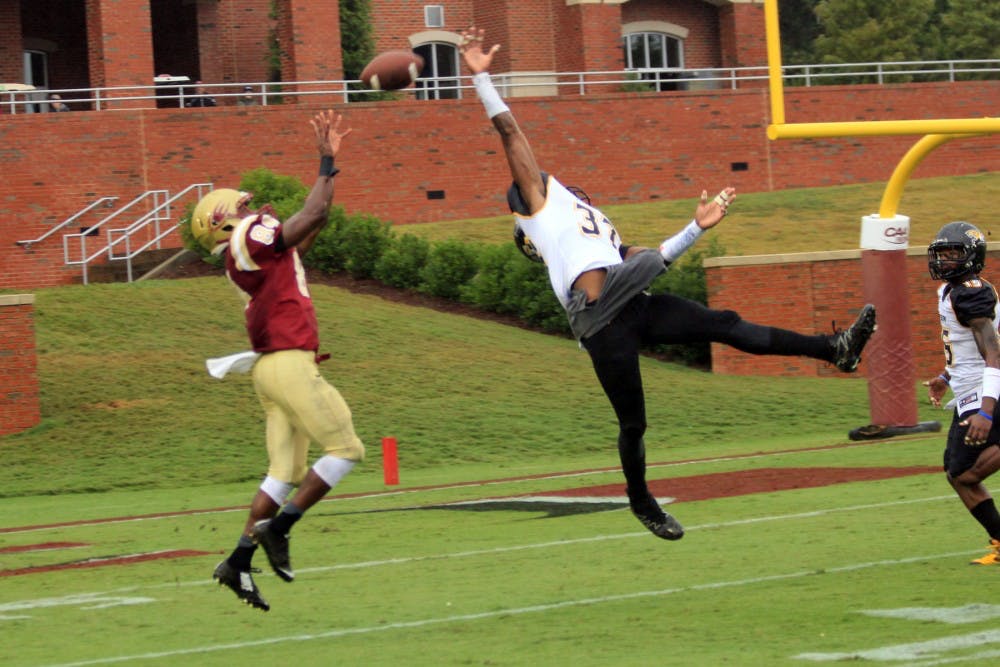 It was the perfect play for Elon University football head coach Rich Skrosky.

Joyner had to decide which route to run.

“I could have gone underneath, tried to get physical with the safety,” Joyner said. “But I saw my chance, went high-side and used my speed.”

Joyner was able to beat the safety on the play and caught the touchdown pass, securing Elon’s first win of the season thanks to an adjustment in the middle of the play.

It’s on a play like the game-winner against Gardner-Webb where the complexity of Skrosky’s offensive system shows its largest benefits. But the learning curve for the quarterbacks is steep.

The receivers are given the freedom to adjust their routes on the fly in Elon’s offensive strategy. According to Skrosky, the adjustments are seemingly limitless.

“In our offense, and I don’t know the exact number, but I would say 65-70 percent of every route in our offense has an adjustability [sic] to it,” Skrosky said. “We don’t have a ton of routes that are run 10 yards, break out. We have some, but not a ton of them.”

For the quarterback, these added adjustments require a deep knowledge of what each receiver might do. It makes it difficult to figure out what is going to happen on each play.

But for Christiansen, there’s a positive element to it as well.

“It adds complexity, but it also is a huge advantage,” Christiansen said. “For example, if we have a receiver running a deep route, they can cut it off and run to the open spot. Its nice when you have overcome that challenge and you know exactly where they’re going to be.

“So when you know what’s going on and where the receiver is going, then it’s just easy.”

Even on the same route, the route can be run in different ways, which the offensive coaches always encourage.

“For instance, [senior tight end] Doug Warrick will run the same route as Corey Joyner, but they’re going run that same route very differently,” Skrosky said. “Warrick’s probably going to get into the defender a little bit more, be a little more physical, whereas Corey’s probably going to get on an edge of a guy. He’ll use his quickness and elusiveness, even on the same call and route. So what the wide receiver needs to do, or the tight end, is make sure that [their personality on the route] is consistent.”

The variations would seem to make it more difficult for Christiansen and the quarterbacks, but he says he has a grasp of what he needs.

“It’s all just knowing your personnel,” Christiansen said. “I keep saying it, but it’s in all the work in practice, you become so accustomed to how [junior tight end] Zach [Duprey] will run a [corner route] compared to how Doug will run it or how Corey will run it.

“Somebody will run it with more speed, or someone will get more separation. You have to be comfortable with who you’re throwing to in order to ultimately have success. You have to know their strengths, and know their tendencies.”

For Joyner personally, he knows his strength is in his speed.

“More often that not, I will use my speed to beat the defender,” Joyner said. “Especially in the slot position, because I’m going against linebackers more than corners or safeties. I mean, the same route, I can run around a guy, come underneath him, or be physical with him. That’s something the quarterback has got to think in a split-second, knowing what I’m going to do. I would like to be a bit more physical, but more times than not, I’m going to use my speed.”

The expectation Skrosky has for the quarterbacks could not be any more clear.

“If you ask them, I hope their answer would be perfection,” Skrosky said. “I mean that. You know you’re never going to achieve it, but I mean it.”

Perfection is a tall task to try to achieve, especially for a freshman like Christiansen.

“I think he understands that perfection is impossible, but that’s what we need to strive for,” Christiansen said. “Every route needs to be perfect, every throw needs to be right where it needs to be, and [attempting to do] that is the only way to ultimately get to where you want to be, [which is to try and be perfect.”

Skrosky recalls some of his previous quarterbacks embracing the same mindset, including four-year starter Scott Riddle ’11.

“When [Riddle] came out, if a ball hit the ground and we were just doing [skeleton passing drills], it was like a tragedy,” Skrosky said.

This mindset, and Christiansen’s willingness to strive for it, seems to have made an impact on Joyner.

“If the quarterbacks expect [perfection] out of themselves, then we, as wide receivers, have to expect that out of ourselves,” Joyner said.

A focus on the little things

In the first quarter against Towson University Sept. 26, Christiansen threw a long, looping pass to freshman receiver Tereak McCray and connected from 35 yards out, giving Elon its first score of a 17-13 victory.

Right before the play, the nonverbal communication was the key for McCray.

“Before the play, Connor gave me the nod to go, so I just went,” McCray said. “He threw a perfect ball, right over the defender’s hands. It was an easy catch, so I caught it, and just ended up in the end zone. [The defender] was very close.”

Yet all Christiansen could think about was an early third-quarter pass.

“Well, first off, I had to apologize to [McCray] because I cost him a second touchdown,” Christiansen said. “On that one, I underthrew it, but it’s hard to throw in the conditions.”

After laughing for a moment, and turning to his side to gauge his receiver’s reaction to the apology, Christiansen continued.

“On the first one, he had a good matchup, and Tereak is very fast,” he said. “They were in press coverage, and really no safety help. So I just dropped back, took a shot and let him make a play. And he did a great job.”

The struggles for the offense have been mighty this year, with Elon currently ranked 121st out of 123 Football Championship Subdivision (FCS) schools in total offense.

But it’s in the relationship between the quarterback and his receivers, and all the work that went into it, that Skrosky says can’t be placed under a time restriction.

“I think it’s a process that never ends,” Skrosky said. “I think they get to a point where there’s a comfortability [sic] about it. You see them out here after practice all summer long. I think the non-traditional seasons, the winter and the summer, when they’re out on their own, [are the most important]. And we had a good summer. But it’s a process.”