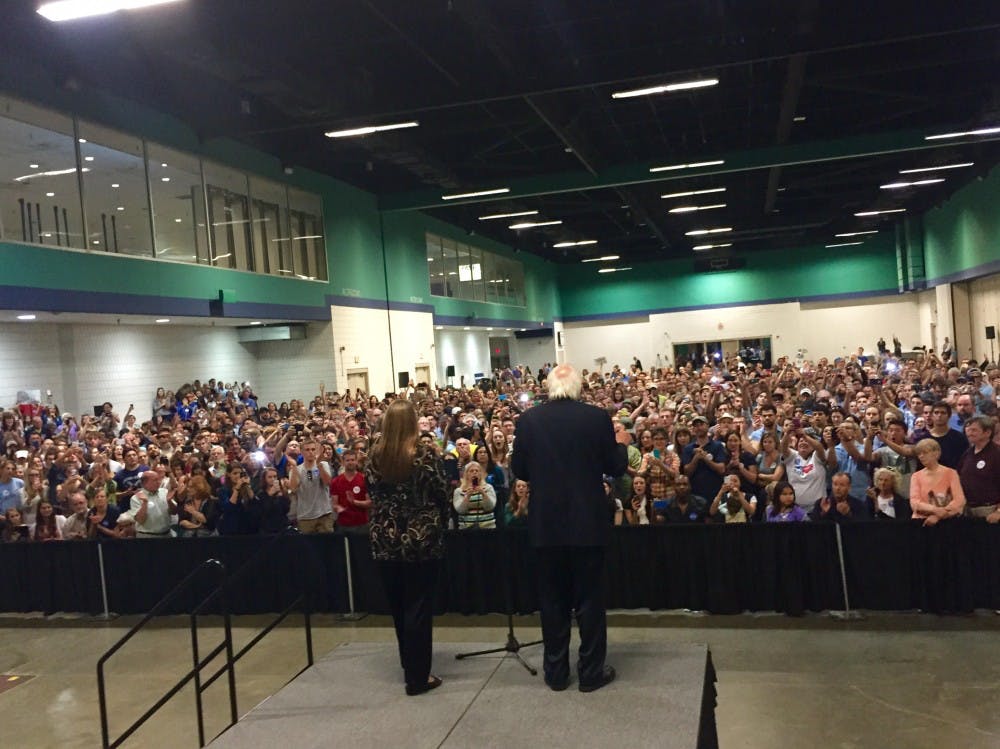 Sanders, who spoke for nearly an hour, focused on issues that affected the younger generation throughout his speech.

"We are turning our backs on an entire generation of young people," Sanders said, speaking to a room of predominantly college-aged people.

Sanders spoke on raising the minimum wage--something that elicited one of the loudest cheers of the night.

"Wages in America are just too damn low," Sanders said.

Sanders said he believes Americans who work 40 hours each week should not be living in poverty.

"The federal minimum wage of $7.25 an hour is starvation wage," Sanders said. "You can do the arithmetic as well as I can. It just does not add up and that is why we need to raise the minimum wage, to a living wage, $15.00 an hour"

Sanders said students should be able to get an education, regardless of the income of their families.

Another topic that struck a chord with the younger supporters in the room was drugs.

"Too many lives have been ruined for non-violent (drug) offenses," Sanders said.

He pointed out the lack of punishment for CEOs who, as Sanders said, "ruined our country's financial status," while teens who are caught smoking marijuana have a criminal record.

"Instead of having more people in jail than any other country, how about having the best educated country on earth," Sanders said.

"This country is in serious trouble when a major political party rejects science," Sanders said.

A longtime airline union worker and a Muslim-American N.C. State student opened up for Sanders.

"He's been a clear voice in the age when 'go along, get along' politics just won't do," former airline worker Angie Wells said.

James Whalen, 22 of Burlington N.C., said he showed up to Sanders' rally to see what the candidate was all about.

"I want to hear Bernie because he's electrifying and has had a huge crowd everywhere he's shown up," said Whalen. "I don't know if Bernie has won me over yet, but of the ones who have declared so far, he is definitely my guy."

Whalen said his struggles as someone new to the workforce are similar to the struggles of twenty-somethings across the United States.

"We're struggling with college debt to get through, struggling to balance a budget; deciding if we can afford the ice cream this week or not," said Whalen. "That's real stuff for people my age."

Whalen said Sen. Sanders doesn't ignore the youth, and that's why he was interested in hearing what the candidate had to say.

"Not only could Bernie do a lot federally as president," Whalen said. "But he's taking a bunch of people who currently have no voice and giving them some way to speak."

Nicole Keyser, 20, is a student at Salem College in Winston Salem, N.C. "It was an exciting experience for sure," said Keyser. "It's nice to see a lot of young people in the audience, people our age supporting similar values.'

"I feel like he could give North Carolina a more liberal view. That would probably be a good thing, especially for younger generations that are more progressive than the older generations in the state," said Keyser.

Andrew Savage, a student at University of North Carolina Greensboro, said he believes the values of college students and Bernie Sanders align well.

Sanders is set to participate in the first Democratic Primary Debate in Las Vegas, Nevada on Tuesday, October 13.