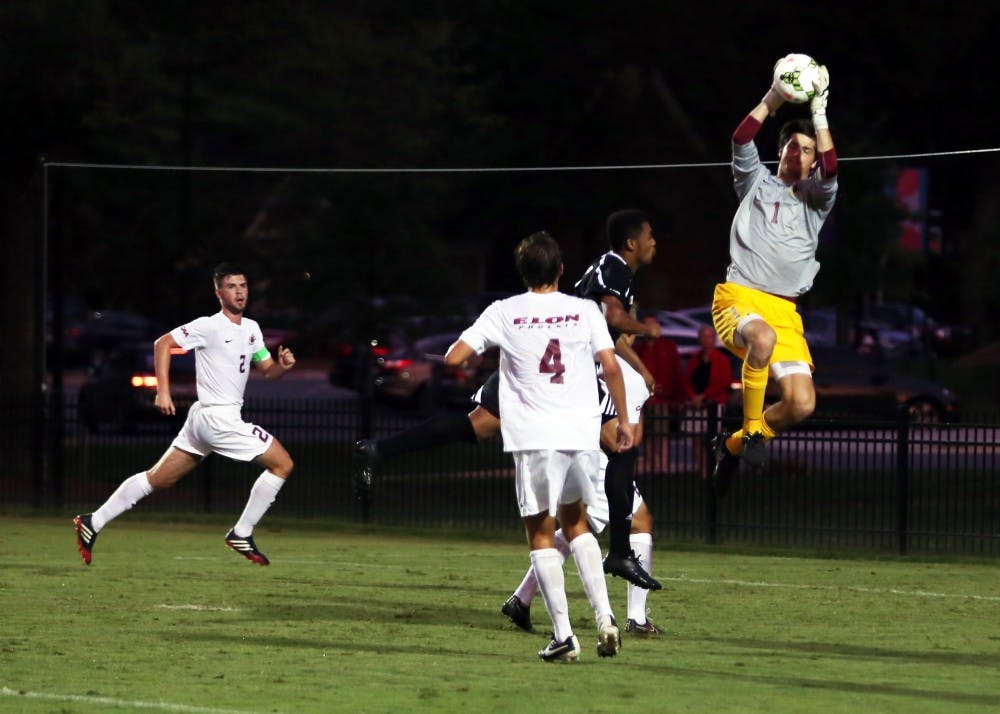 Elon Keeper Matthew Jegier makes a save in a game against Davidson. (Andrew Feather/ELN)

The fourth shutout in five games for goalkeeper Matthew Jegier helped the Elon University men's soccer team to a 4-0 win over former Southern Conference foe Davidson on Saturday night at Rudd Field. The win was Elon's fifth straight to start the season, the first time in program history the Phoenix has won its first five games.

"I thought tonight was our best performance of our five games," Elon Coach Chris Little said. "We obviously love scoring goals and we like being an attacking force, but as a coach I'm really proud of the defense tonight."

The Phoenix defense put together a stellar effort, allowing just one shot on target and making Davidson work for every opportunity it got, something Jegier, a redshirt freshman, says is helping in his transition to the college level.

"My back four, they're making it a lot easier for me," Jegier said. "I didn't really face any shots on goal, and that's always nice as a keeper."

But while Jegier wasn't bothered for most of the match, Davidson keepers Matt Pacifici and Andrew Kenneson were bothered all night, facing 19 shots from a fiery Phoenix offense led by freshman Jaiden Fortune, who opened up the scoring in the 37th minute by drilling a cross from senior Eduardo Alvarez bast Pacifici. Fortune added another goal in the 51st minute, but failed to finish with a hat-trick after putting a rocket off of the right upright with 25 minutes to go.

I was very excited [when he scored]," Fortune said. "It was a great team performance, but its an extra enthusiastic feeling to score in front of the home fans. It felt very good."

Nathan Diehl and Elijah Agu also scored for Elon. Diehl put a slid a rebound past Pacifici in the 40th minute, and Agu delivered a strike past Kenneson with a minute to go in the game.

Elon looks to continue its historic start on when it heads to Winston-Salem to take on Wake Forest on Tuesday at 7 p.m. In the last meeting between the two sides, the Phoenix beat the ninth-ranked Demon Deacons 1-0 on Sept. 17, 2013.