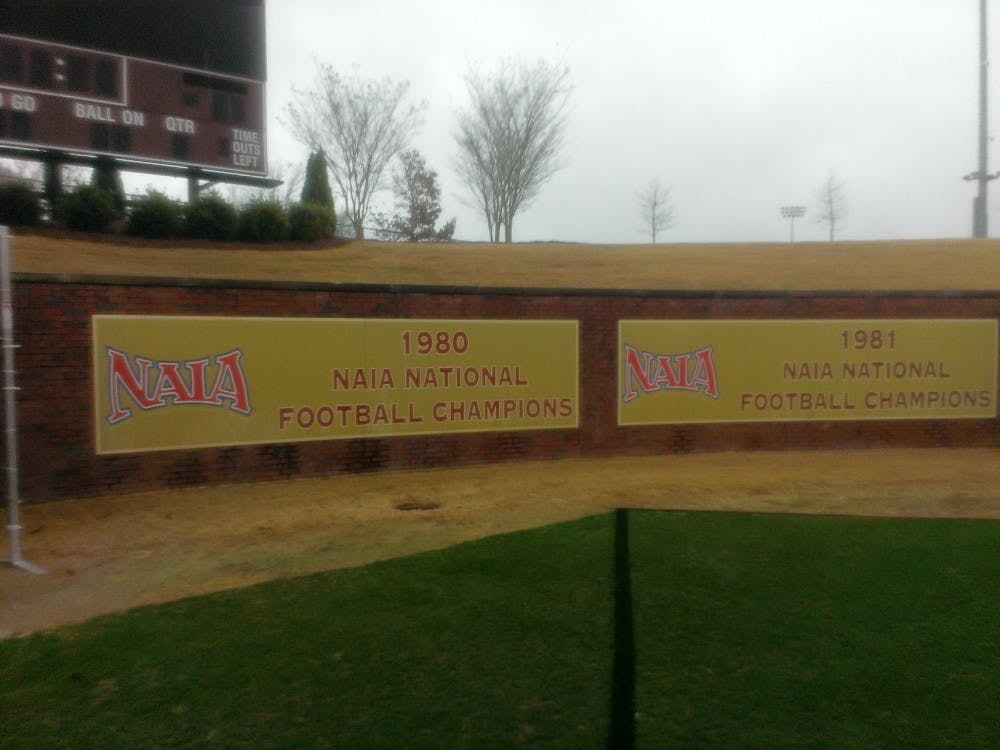 A scrawny high school freshman named Jerry Tolley, sitting on his bicycle, leaned against the Edenton High School building on the first day of football practice in fall 1957.

The legendary coach Bill Billings, who won four state titles at Edenton and later collected 10 unbeaten seasons as a coach in Delaware, approached Tolley with a skeptical look.

“Tolley, what are you doing?” Billings inquired.

“Well, I want to be a manager,” Tolley replied.

It wasn’t the first time Tolley would be asked to do something he wasn’t expecting, and it wouldn’t be the last time he complied. And, actually, that moment just might have parlayed Tolley into a Hall of Fame career.

Tolley, 72, has spent nearly 50 years around Elon University and the Town of Elon in a number of capacities — coach, teacher, author, director of giving, development board member, mayor. This fall is the 35th anniversary of his first national championship football team.

He’s seen the school and the area change drastically in more ways than one.

But he’s been a mainstay.

Tolley grew up in Edenton, North Carolina, a town of about 5,000 that sits on Albemarle Sound in the eastern part of the state. The Most Outstanding Player on Edenton’s 1960 state championship team, Tolley had a number of in-state colleges recruiting him.

One day, he received a letter from Davidson College.

“I said, ‘I don’t know what a Davidson is. Why would I want to go to Davidson?’” Tolley said.

So he threw the letter aside and never looked at it.

Tolley acknowledges now that, knowing Davidson’s reputation as a strong academic institution, he’d probably give the school a little more consideration. But he ended up going to East Carolina in Greenville, where he played football and ran track, winning a pair of bowl games in his junior and senior seasons.

He met his wife, Joanie, at East Carolina. The couple has two sons, Jay and Justin, who each have two children now.

East Carolina ran the single-wing offense when Tolley played there, which prompted a call from Red Wilson one day asking him to come onboard as a coach at Fayetteville Senior High School, where they also ran the single-wing. After six months in Fayetteville, Wilson took the head coaching job at Elon and brought Tolley along as an assistant.

Ernie Tootoo, a linebacker at Elon from 1978-1982, remembers Tolley holding a Coke and wearing a blue hat with the letters NAIA (National Association of Intercollegiate Athletics) on it.

One day, Tootoo stopped wondering about the hat and finally asked his coach about it.

“That’s what I want to win, a national championship,” Tolley said. “I’ve never won one.”

Tootoo doesn’t remember seeing Tolley wear the hat much later on — he would see it just in Tolley’s office. Perhaps that’s because of the 1980 and 1981 seasons, where Elon took home consecutive NAIA national championships.

Tolley spent 10 years as an assistant under Wilson in a period when Elon won six conference titles and advanced to the NAIA playoffs three times. As an assistant, Tolley also coached the track and tennis teams and taught physical education.

When Wilson stepped down, Tolley took over and saw immediate success. Elon went 49-11-2 in his five years at the helm.

The Phoenix reached the national championship game in 1978, but lost 35-14 on the road to Angelo State University, a national power at the time.

Two years later, it was a loss to Mars Hill early in the season: “They beat the crap out of us,” said defensive lineman and captain Chris Worst — that helped turn the tides. Elon won 12 straight games after that to capture the title, beating Northeastern State University 17-10.

The next year, the Phoenix beat Pittsburg State University 3-0 for its second straight title.

Tolley was known to his players as not always the loudest coach, but a strong disciplinarian. Tootoo said Tolley had what he called a “mess-up list,” for players being late to practice and things of that nature. That’d mean some extra running on the weekends for whoever made the list.

“There was really no room for error,” Tootoo said. “You knew if you stepped out of line, you were going to be disciplined for that wrong action. He never screamed or hollered too much. He’d sort of just talk to you. You knew that when he came around, you had to be ready to play.”

Tolley earned the respect of his players, and still keeps in touch with a lot of them.

“[Tolley] had a lot of confidence in his players,” Worst said. “We respected him, but we also feared him at times. He didn’t care if you were a fourth-teamer — he’d treat you the same as everyone else.

“He could just get the best out of us. It wasn’t like he got in there and jumped around, but when he spoke, everyone listened. You could hear a pin drop.”

Tolley retired from coaching after the second national title — he was 39. But he was prepared. He received his doctorate from the University of North Carolina at Greensboro while coaching at Elon.

“I always said I was going to be out of coaching by 40,” Tolley said. “I didn’t know where old coaches went. I figured they were all selling insurance or used cars somewhere.”

Taking on a new role

It was 1982 when Tolley was approached by Fred Young, the president of Elon at the time.

“Have you ever thought of running for the Town Board of Alderman?” Young asked.

“Well, I asked two other people to do it, and they said no,” Young said. “Would you do it?”

So, once again, Tolley obliged.

Tolley served on the Board for six years, and eventually ran for mayor of the Town of Elon. He’s currently in the midst of his fifth term as the mayor, the longest-serving mayor in Town history.

He first became interested in politics when he was a freshman at East Carolina and the president of the SGA asked him to run for a freshman representative position. He won that, and later took on roles with the Inner Dormitory Council, the Honor Council and the Dean’s Advisory Council.

More than once a month, Tolley visits the office in Alumni Fieldhouse that bears his name to visit current Elon head football coach Rich Skrosky.

Tolley still keeps his presence among the Elon football team, whether it be by attending the weekly radio show during the season, sitting on the hill and watching practice once a week or spending time in the press box at each home football game.

He splits his fall calendar in two, highlighting which Saturdays he’ll get to go to East Carolina games and which ones he’ll watch Elon. Last spring, he served as an honorary coach for Elon’s spring game.

Prior to last season, his first as head coach, Skrosky brought in Tolley to teach the team about the history of Elon football, which is more impressive than recent seasons would suggest. Besides Appalachian State University, Elon is the only North Carolina college to win a national championship in football (in 1980 and 1981).

“That’s why I want to keep him involved in our program,” Skrosky said. “One of the biggest feedbacks I’ve gotten from our kids is they’ll say, ‘We realized we were part of something bigger.’ It’s guys like Jerry that keep that thread.”

Skrosky is reminded of those titles each day when he walks in his office, which is named for Tolley. Tolley is the only coach in Elon’s history to garner the title Coach Emeritus.

“It lets you know there’s a standard here, and you have to live up to it,” Skrosky said. “It’s pretty cool to get reminded by him every day.”

Worst still chats with Tolley a lot, and the two tailgate and sit together at Elon home games.

The coaching is perhaps what Tolley is most known for — “Any time I am introduced within 50 miles of Elon, they say, ‘Jerry won two national titles,’” Tolley said.

But he knew it wasn’t something he’d do forever.

So that’s how the coach who enjoys working in the yard ended up spending time at LabCorp, editing six books about football and helping raise money to build Rhodes Stadium.

All at a place he had never heard of before he came here.

“I’ve always thought Elon was the greatest place in the world,” Tolley said.