Starbucks on hold for Elon after opposition 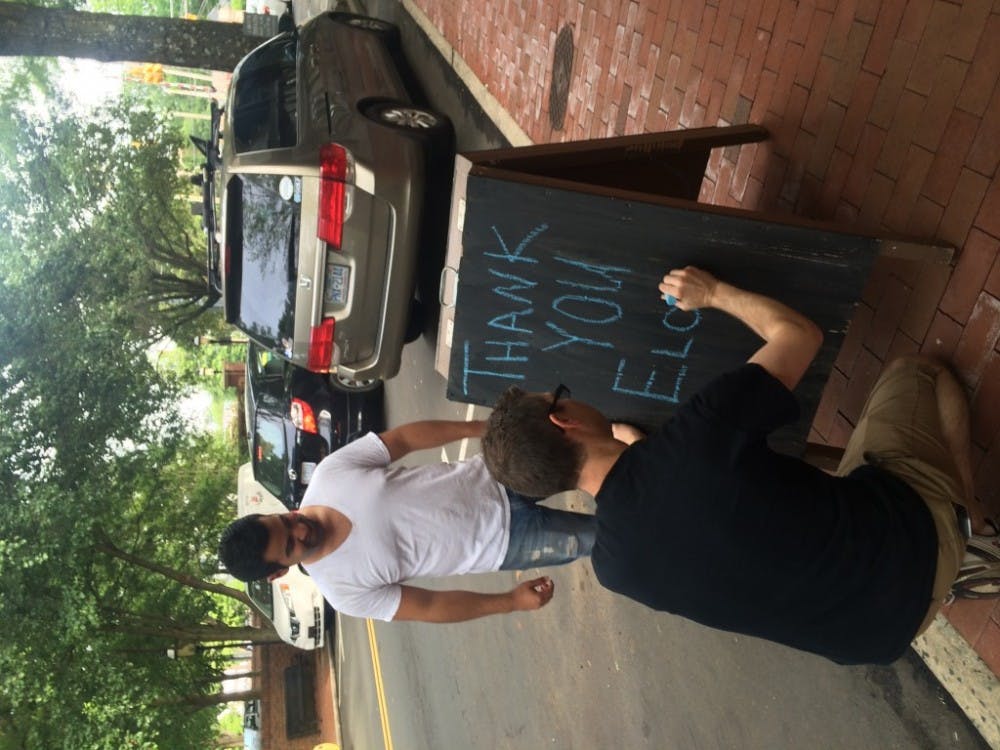 After the university announced it was putting a pause on plans to bring a Starbucks to campus, Phil Smith, who owns Oak House, thanked the university and the community outside his business Thursday. Photo by Lauren Phillips, assistant style editor.

Following widespread grassroots opposition against Elon University's plans to bring a Starbucks to campus in the fall, the school is taking a step back, saying it needs more time to develop a "more comprehensive" plan for the area's future.

Starbucks will not be coming to campus for at least a year, and perhaps longer, according to E-Net on Thursday. Acorn Coffee Shop, the planned site of the Starbucks that is adjacent to Oak House, will remain in its place for the foreseeable future, and so will Varsity across the street in McEwen dining hall. The university's original plan was to move Acorn into Varsity.

"I feel that this will be a good opportunity to really take a long look at what will fit best in downtown Elon," said Phil Smith, who owns Oak House, a locally owned and operated coffee, beer and wine shop that opened its N. Williamson Avenue doors last fall. He added that he was "grateful, so thankful" to the university for listening to his concerns.

In their release, administrators raised a number of concerns about needing more time to plan for all of the changes coming to the area. The opposition to the plan wasn't mentioned.

"As we took a closer look at the plans for McEwen Dining Hall and on Williamson Avenue, it became apparent that we need more information and more time to chart the course for the future," said Gerald Whittington, senior vice president for business, finance and technology, in an E-Net post.

Smith, who met with university officials earlier this week, said the move is the right one that shows Elon took community input into account. By the time the change was announced Thursday, more than 3,000 people had signed a change.org petition urging the university to reconsider its decision.

The opening of Park Place on Haggard Avenue, next to Skids, is a contributing factor, as is the construction of the new School of Communications, Whittington said.

Patrons in Oak House on Thursday celebrated the decision. Though the university said more than half of respondents to two surveys earlier this school year indicated a preference for Starbucks on campus, some students now are asking for another shot.

"The majority of the student body didn't want [Starbucks], and the administration listened," said junior Paloma Jenkins, as she sipped a celebratory beer inside Oak House. "They should send out another survey."

At the time of the initial announcement, students expressed concerns about how the move would impact local business of all kinds downtown, including SGA President Avery Steadman.

"Though I would like to hear more from a wider range of students, I support local business,” said Steadman in an interview last week after initial plans for Starbucks were announced. “I think that Aramark has a better use of that space. It’s another situation in which people are speaking out because they feel strongly about it.”

Though Smith initially said his business could survive alongside Starbucks, he's grateful that things are slowing down.

"My concern was it just happening without questions, without seeing what the community wants, so I think that's been achieved," he said. "Thanks to the community, everyone who spoke up and expressed their voice about what they wanted to see in downtown Elon."

Though there is no guarantee that the university won't bring in Starbucks later down the line, the bought time may help Oak House further establish itself in the local market.

"I'm kind of happy about it," said junior Bryan Dunn, part of a standing-room only throng inside early Thursday evening. "It gives Oak House more business. I think it would be good to give Oak House another year to establish itself."