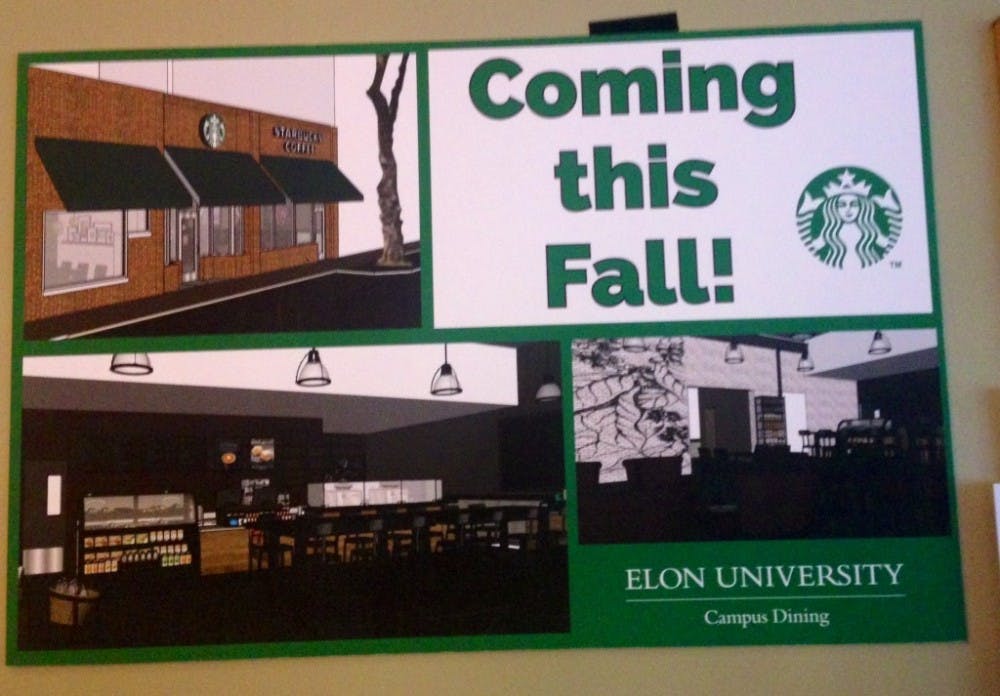 Plans by Elon University to bring a Starbucks to campus next fall have been met with fierce grassroots opposition, saying the corporate coffee giant will disrupt local business and impede the growing artisan vibe of downtown Elon.

Patrons of The Oak House — a locally owned and operated coffee, beer and wine shop that opened its N. Williamson Avenue doors last fall — take issue with the location of the Starbucks, planned to set up shop in place of what is now Acorn Coffee Shop, adjacent to the Oak House.

While Phil Smith, who owns Oak House, said he’s confident his shop could co-exist with Starbucks, he’s not inviting the chain in with open arms.

“I was disappointed to learn that Aramark was putting a Starbucks next door,” Smith said. “As for The Oak House, I believe what we are providing in downtown Elon is exactly the type business that augments the community.”

University administrators said almost 50 percent of respondents of two student surveys said they would like a Starbucks on campus — so the backlash has come as a bit of a surprise.

“We worked through facts, through students ... it didn’t come from me waking up one day and saying, ‘Starbucks is going to go up there,’” said Pulkit Vigg, Aramark’s resident district manager.

Tony Crider, associate professor of physics, is a strong local business supporter who started a change.org petition Monday afternoon to urge the university to reconsider Starbucks for the space. As of publication, the campaign had gained more than 2,480 supporters, just shy of its goal of 2,500 signatures.

Though the speed of the community’s support for his initiative took Crider aback at first, he said it proves that Oak House, and local businesses like it, matter to campus climate and provide space for intellectual conversations.

He’s more against the location than he is against the Starbucks brand in general, though.

“There is a time and a place for Starbucks, but I tend to think that place is over in university commons,” Crider said. “It’s not right next to our partner The Oak House.”

With student complaints flowing into SGA, representatives are at work researching and figuring out what the next steps for the organization should be, according to SGA executive president Avery Steadman.

“Though I would like to hear more from a wider range of students, I support local business,” Steadman said, adding that SGA found out about the plans at the same time as the rest of the student body. “I think that Aramark has a better use of that space. It’s another situation in which people are speaking out because they feel strongly about it.”

But there may be only so much the university can do—an agreement already exists between Starbucks and Aramark, including tentative design plans for the construction of the new location.

Vigg’s vision for dining on the Historic Neighborhood side of campus is a large one, which he said has taken a backseat to the kind of amenities students living in the Global Neighborhood and elsewhere enjoy in terms of proximity to a variety of food options. Aramark and the university have designed a “domino effect” plan to replace Acorn with Starbucks, move Acorn to what is now Varsity and add a Kosher deli to the south side of the McEwen dining hall after the building is renovated by the fall of 2016.

“Our goal, again, is how come Historic Neighborhood doesn’t get the new, swanky stuff and how come Danieley, Colonnades and Global get all of it?” Vigg said. “So as a dining solution provider with students in mind, it seemed to make common sense because this is what the students wanted.”

When it comes to plans for Starbucks in particular, students are taking action on their own — and they’re not waiting on an update from the university.

To accompany the change.org petition, junior Allison Pichowicz turned to Facebook to organize an “Oak House Appreciation Day,” set for this Friday. She — and more than 600 Facebook attendees — plan to populate Oak House at the end of the week to show “Elon that we value this business as a culinary institution and a hangout.”

“I found it very unsettling that Elon went from supporting this local business to putting up its antithesis next door in less than a year,” Pichowicz said. “I saw that many of my friends felt the same way, so I created an event to physically supplement the petition.”

Because Starbucks has a higher turnover rate and more of an in-and-out atmosphere, Aramark and the university feel the two can actually co-exist. Acorn sales were not impacted much by Oak House’s opening, and Assistant Vice President for Administrative Services Chris Fulkerson said the community can support two different coffee shops — even a couple right next to each other.

Crider sees another side. For those visiting campus, Starbucks is the obvious, safe, choice, according to Crider, who said visiting students and their families probably won’t gravitate toward Oak House as often.

But Oak House developing the kind of client base that it has should keep that impact at a minimum, Fulkerson said.

“Starbucks will capture the parents of students who are here to look at Elon because it’s got the name recognition, but the clientele [Oak House] has developed will continue,” Fulkerson said.

“I think when you switch that to a full-on Starbucks, the issue for me is going to be all the visitors and guests who don’t know what we are going to look for the national brand sign,” he said.