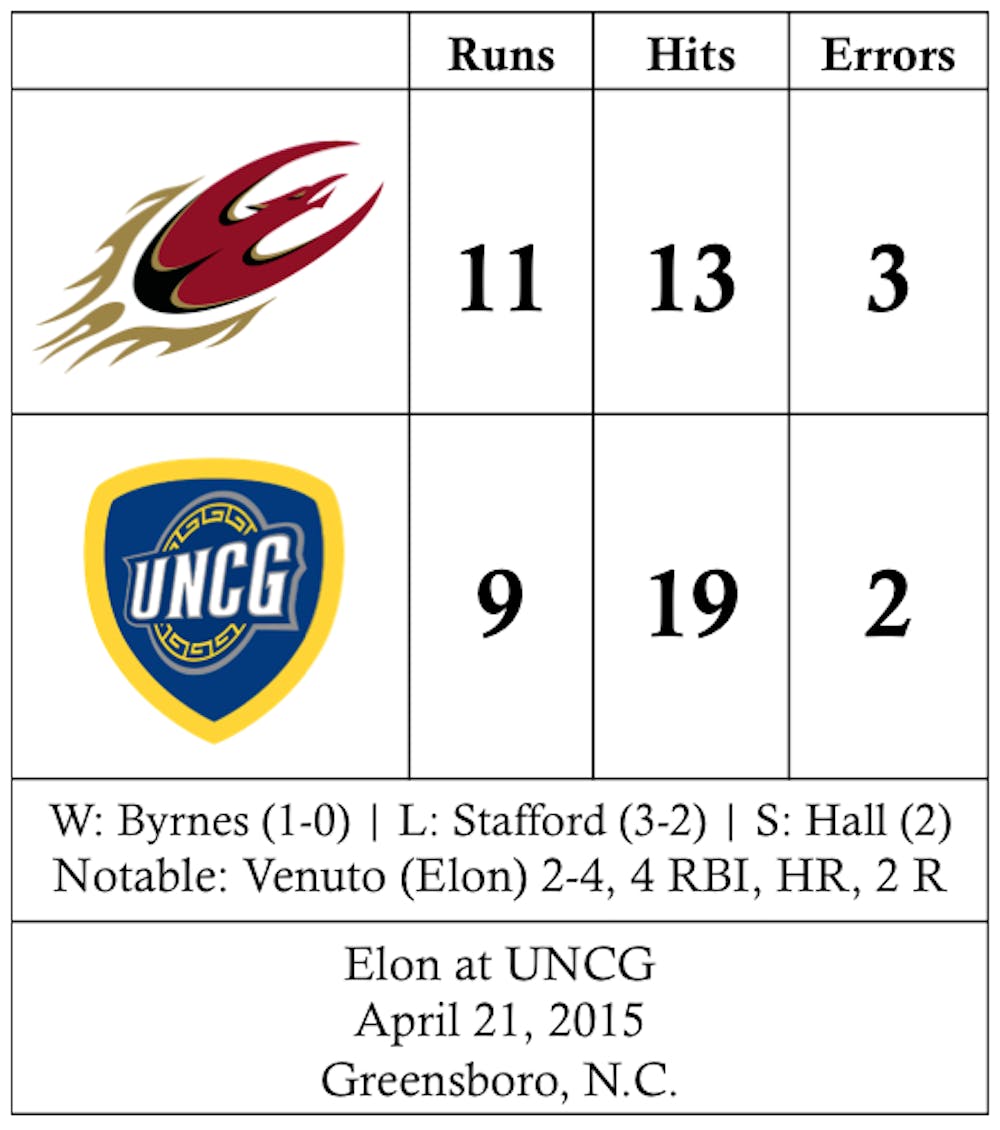 Trailing 6-0 in the top of the fifth and 8-4 in the top of the ninth was not an ideal position for the Elon University baseball team to be in Tuesday at the University of North Carolina at Greensboro. But the Phoenix pulled off a dramatic seven-run ninth inning rally to win 11-9.

In recent games, Elon's offense struggled to generate production from its heart of the batting order. Senior Casey Jones entered Tuesday with one hit in his previous 10 at-bats while senior Chris King was 1-for-23 in his previous six games played at College of Charleston and Towson.

Despite early offensive struggles, the Phoenix bats awakened when it mattered most.

Senior Andy Moore led off the top of the ninth with his team trailing 8-4 and roped a single to right field. Junior Danny Lynch and freshman James Venuto then hit back-to-back singles to narrow the deficit to three. After surrendering a walk to sophomore Danny Crowe, an RBI single to Jones and an RBI fielder's choice to sophomore Kory Shumate, junior Joey Tomko approached the batter's box with a chance to tie the game with one out and runners on first and third.

Tomko swung on the first pitch and singled through the left side to give the Phoenix an 8-8 tie.

Later in the frame, sophomore Nick Zammarelli delivered a clutch double down the third base line to Elon ahead 10-8. Moore, who led off the top of the ninth, came up to the plate again and tacked on an insurance run by hitting a single to score Zammarelli.

But the UNCG Spartans refused to go away silently in the bottom of the ninth. Sophomore Chris Hall allowed back-to-back hits to bring the tying run to the plate with one out. Hall struck out a batter but gave up a two-out RBI single up the middle. Hall escaped the jam by forcing UNCG senior Hunter King to ground out to short.

The Phoenix returns to a .500 overall record (19-19) on the season with the win and remains 9-6 in Colonial Athletic Association play. Elon will travel to Campbell University today  in hope of going above .500 for the first time since its record dropped to 8-7 March 13.

First pitch is scheduled for 6 p.m. and starters have yet to be announced.