From walk-on to starter: Josepha Mbouma is a rising star for the women’s basketball team 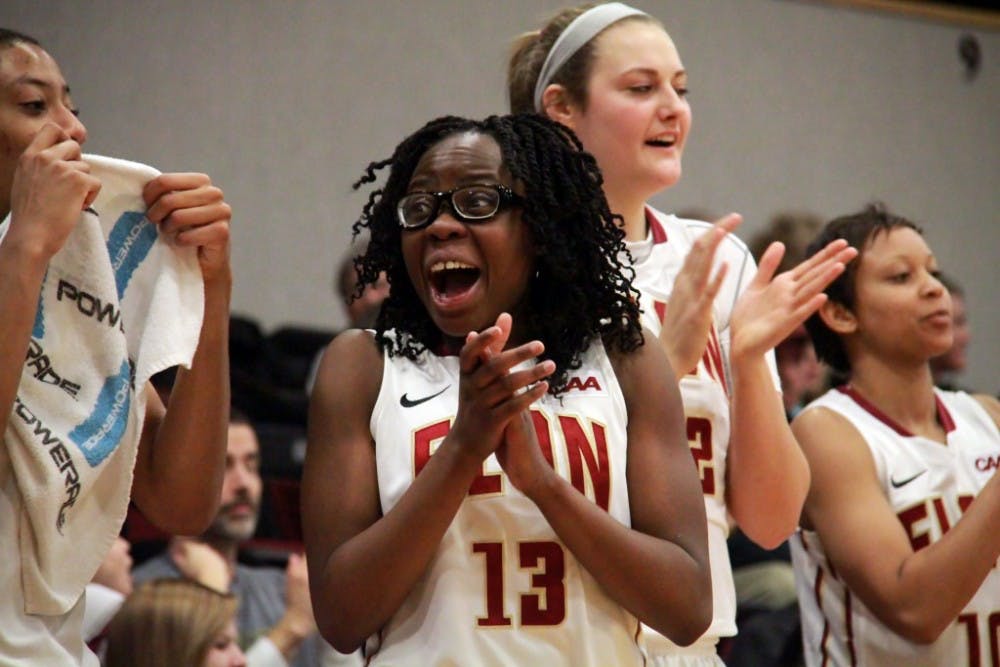 She joined the Elon University women’s basketball team as a walk-on and played for one minute during her entire freshman season. In her sophomore year, she made seven appearances totaling 21 minutes.

But junior Josepha Mbouma quickly transformed into one of the most versatile, elite players for the Phoenix.

“My main focus was to bring that spark in practice,” Mbouma said. “I just took pride in that role to bring energy, to be a defensive presence in practice and prepare my teammates for games.”

Throughout the course of the 2014-2015 season, Mbouma was best known for her defense. She played scrappy when working along the boards for loose rebounds and earned 19 rebounds in her eight games as a starter.

Despite her defensive success, coach Charlotte Smith needed her to develop more confidence on offense.

“My coaches were telling me ‘if you’re going to start, we need more offensive production from you and we see that you’re capable of it,’” Mbouma said. “They were just telling me to have more confidence in my offensive skillset when I’m in the game.”

She delivered the breakout performance her coaches had been waiting for.

In the opening round of the Colonial Athletic Association tournament on March 13, Mbouma scored a career-high 15 points en route to a 60-48 win against University of North Carolina Wilmington.

Mbouma went 4-for-6 from field goal range, 1-for-2 from beyond the arc and 6-for-6 at the free throw line. She also showed tremendous discipline when controlling the ball by only allowing a single turnover in 29 minutes.

“Leading up to the conference tournament, I tried to remember that I needed to look for open opportunities and I think that’s just what happened,” she said.

Mbouma said her primary concern is the overall good of the team rather than her playing specific playing time.

“People need to know that I’m about my team first,” she said. “Whether I play 20 minutes or two minutes, I want to be the best teammate I can be.”

Her contributions helped propel the Phoenix to victories in the CAA tournament, which led the team to its first Women’s National Invitation Tournament.

Although Elon lost 69-47 in the opening round of the WNIT to Georgia Tech, it advanced further into the postseason than any basketball team in school history.

While Mbouma looks to assume a regular starting role with the Phoenix next season, she also tries to strike a balance between athletics and academics.

Elon demands a lot from its students academically and encourages them to get involved, according to Mbouma. She looks forward to having a lighter schedule during the offseason with less travel.

“This year has been the most [time consuming],” she said. “You don’t realize how much travel takes a toll on your body. And with the CAA, we did a lot of flying.”

After a Sunday, March 1 game at Hofstra University in New York, Mbouma and her teammates got snowed in and had to wait a long time for a flight to return to Elon. Because of the strong team camaraderie though, Mbouma was able to get through the travel struggles.

But the travel is a small price to pay for the thrill of competing at the collegiate level.

"I'm willing to do whatever for this team to succeed," she said. "It really doesn't matter to me whether I'm in the limelight or not because at the end of the day, if we win the championship, we're all getting rings. It's not just the starting five"