Despite injuries, baseball has potential to excel going into postseason 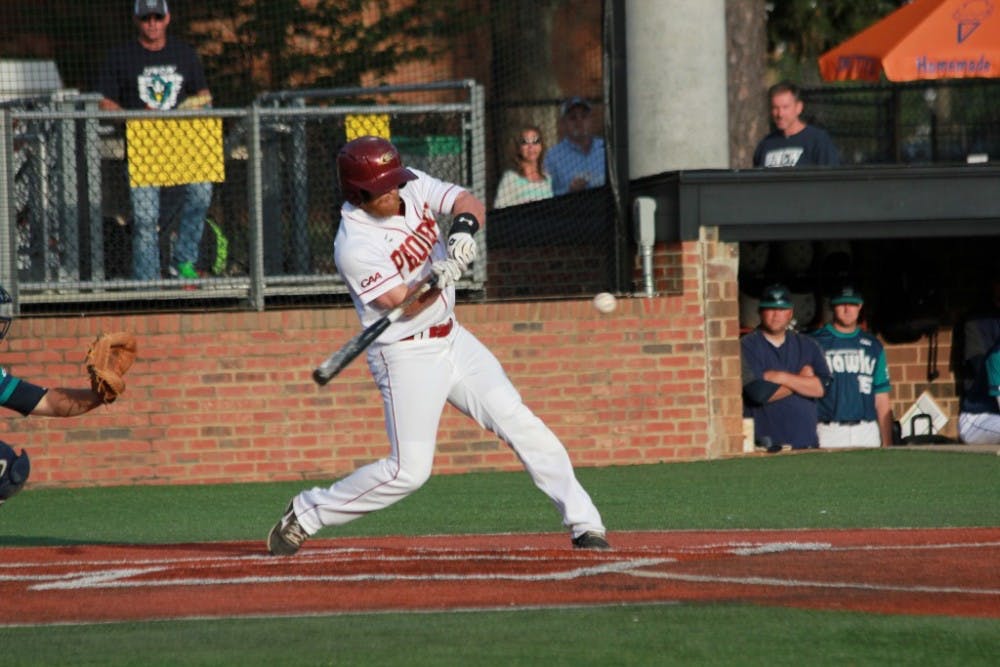 For the Elon University baseball team to remain competitive, its pitchers will need to improve and have more faith in its defense.  Though the team is suffering from injuries, it is on the brink of unlocking its potential.

After winning two of three home games last weekend against the No. 22 University of North Carolina at Wilmington, the Phoenix has proven it can compete against the best.

“If you had told me coming in we’d get two out of three, I’d take it,” said Elon head coach Mike Kennedy after Sunday’s doubleheader. “We did enough. I thought we played really well for two games on both sides of the ball.”

It is clear Elon can generate enough offense to support its pitchers. The challenge lies in getting pitchers capable of executing the fundamentals by throwing strikes.

This is not a foolproof system.

On Sunday, Elon lost 14-­6. Pitchers threw several balls catching too much of the plate. On April 19 and April 21, the team surrendered 14 and nine runs, respectively.

But at the end of the day, the pitchers do not need to throw gems to win ballgames.

A plethora of offense from a variety of players makes the Phoenix one of the most competitive teams in the Colonial Athletic Association.

The Phoenix scored 47 runs in its five games last week, including a 14-­run performance Friday against UNCW. Senior first baseman Chris King ended a 1­-for-­29 drought with a two-RBI double and finished the weekend 3­-for-­12.

Other players who had been struggling prior to the weekend also delivered in clutch situations.

Austin Leeney, a junior catcher who entered the weekend with no hits in previous 10 at-bats, went 5­-for­-9 (.556) against the UNCW Seahawks in his three starts.

While new players contributed, familiar ones helped as well.

Senior infielder Casey Jones hit 7­-for­-12 (.583) in the weekend series and had at least  one hit in all five games last week and has recorded a hit in 10 of his last 11 games. On Friday, he tallied four hits and three RBI.

Zammarelli was 5-­for-­7 in Sunday’s doubleheader, going 4-­for­-4 in the second game. He earned six RBI. He also hit two doubles and a homer.

“I’ve been feeling pretty good at the plate, so hopefully this is one of those games that really gets me in a groove,” Zammarelli said after the doubleheader. “But as a whole, we swung it really well this weekend.”

Elon’s most impressive offensive feat occurred Friday when each of its nine starters recorded at least one hit. According to Kennedy, there has been significant growth in the number of batters stepping up.

“We’re having more than one or two guys have quality at­-bats,” Kennedy said. “We’re having four, five or six guys put together some pretty good at­-bats. The result is we’re starting to score runs.”

As the Phoenix dominated offensively, it excelled on the mound throughout much of the week.

Sophomore Nick Beaulac pitched well into Friday’s game. Across seven innings of work, he surrendered three runs, two of which were earned, on four hits. He also finished the night with eight strikeouts.

Beaulac converted from a reliever to a starter April 18 when he pitched the first five innings against Towson University and has enjoyed early success since assuming a different role in the pitching rotation.

If there is one obstacle the sophomore faces, it is his command and accuracy. On Friday, he allowed three walks.  He also threw a whopping 110 pitches.

“I’ve got to keep my pitch count down a little more and try not to walk as many guys,” Beaulac said following his win on Friday.  “I was trying to throw to hitters more.”

Kennedy has successfully shifted his pitchers’ mindset. For much of the season, Elon’s starters and relievers tried to throw past hitters and find the perfect pitch.

They allowed too many free passes as a result.

Nine games remain on the team’s schedule. Six of the games are against CAA opponents. The Phoenix will travel to Hofstra University this weekend and return to Latham Park May 8-­10 to host the University of Delaware.

According to the CAA website, Elon has an easy road ahead on paper. Hofstra is in last with a 3-­15 record in CAA play while Delaware ranks sixth at 7­-8 in the CAA.

Elon is currently in fourth place with a comfortable two game lead on College of William & Mary. Since six teams are able to advance to this year’s CAA Tournament hosted at College of Charleston, Elon will easily make the tournament.

But the Elon should not be content with a fourth place regular season finish.

The Phoenix has a .500 (3­3) combined record against College of Charleston and UNCW — currently the top two teams in the CAA — and could secure a third place finish relatively easily.

Since the top two seeds get a first round bye from the CAA Tournament and the Phoenix lost two of three games at William & Mary earlier this season, the No. 3 seed would provide the Phoenix with an enormous advantage.

It would allow the team to play a much easier opponent on paper.

So what stands in Elon’s way of succeeding? Injuries.

Sophomore starter Matt Harris has a concussion and does not yet have a timetable for returning, according to Kennedy.

Junior starter Michael Elefante is also out because of soreness. He will be getting an MRI this week, so his status is unknown.

On the positive side, the Phoenix proved it could win a series against the top team in the CAA without two of its key starters.

It is a shame Elon cannot put its best players out on the field.

But with new stars emerging and slumping hitters getting back on the right track, so much promise remains.