Clutch hitting, Beaulac propel Elon to 14-3 thrashing over No. 22 UNCW 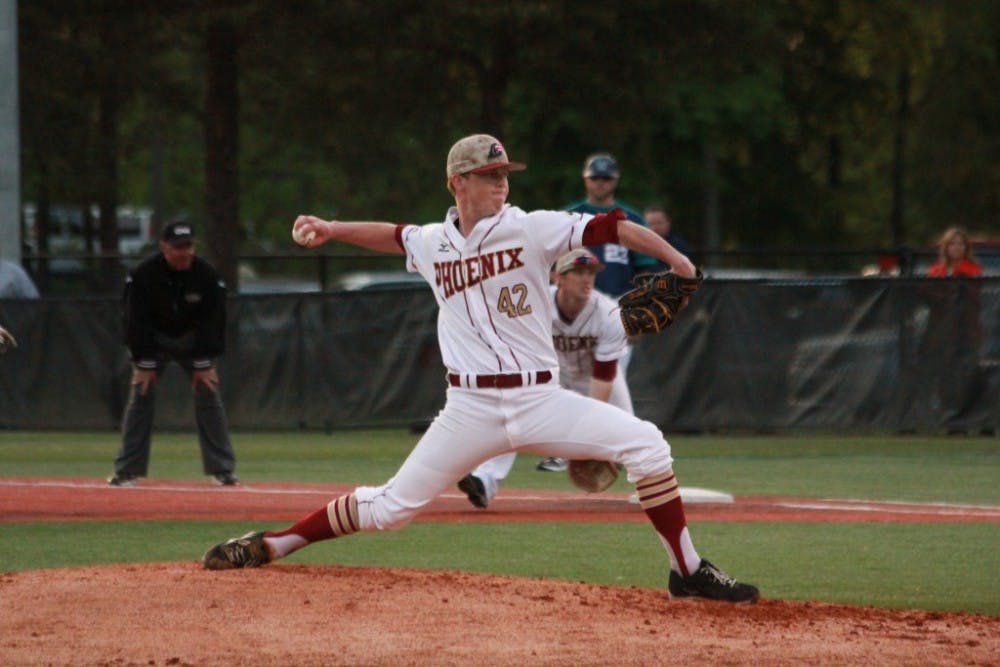 With a plethora of offense against No. 22 University of North Carolina at Wilmington and disciplined pitching from sophomore Nick Beaulac, the Phoenix pummeled its conference leader 14-3.

"We're having more than one or two guys have quality at-bats," Kennedy said. "We're having four, five or six guys put together some pretty good at-bats. The result is we're starting to score runs."

All nine starters recorded at least one hit in the game. Six starters had multi-hit nights.

Senior left fielder Casey Jones drove in three runs in a 4-for-6 outing and delivered a two RBI double in the bottom of the fourth to help his team garner momentum.

"The trend with our team is that hitting is pretty contagious, so if one of us is hitting, the rest of the team is hitting," Jones said. "We just got some good pitches to hit tonight and took advantage of some mistake pitches also."

While several other batters delivered brilliant performances, freshman James Venuto may have stood above some of the rest after roping a 2-1 pitch over the right field fence for a two-run homer.

Venuto set an Elon Division I record for homers in a season from a freshman by getting his seventh.

Elon hitters who had been struggling in previous games even managed to contribute offensively.

Senior first baseman Chris King snapped a 1-for-29 drought with a double down the third base line in the bottom of the fifth to extend Elon's lead to 8-1.

The Phoenix scored in each of the first five innings and tacked on an additional six runs in the bottom of the eighth.

Senior shortstop Andy Moore emerged as a major spark plug for the offense. He got on base in four of his five plate appearances and recorded his third consecutive three-hit game.

But the offense was not the only story of the game.

Bealauc surrendered three runs, two of which were earned, across seven frames.

During much of Elon's baseball season, the starting and relief pitching has been the major struggle. Because several pitchers threw out of the strike zone while looking for the perfect pitch to deliver, Kennedy urged his pitchers to trust the defense and throw strikes. Beaulac did precisely that.

Though the Seahawks put a runner on base in six of his seven innings, Beaulac escaped jams thanks to his defense.

"I just needed to realize that I needed to trust my defense," Beaulac said. "And if I pitch to contact, my defense will make plays behind me."

Elon junior catcher Austin Leeney caught three UNCW runners stealing within the first three innings. With two outs and a UNCW runner on first, King made a diving catch on a sharp liner near the bag.

Beaulac still looks to improve as the season progresses by pitching with great accuracy in order to reduce his pitch count. But Kennedy is proud of Beaulac's evolution with the baseball program.

"He's a walk-on that's been through trials and tribulations with having surgery and being cut," Kennedy said. "You can go through a list of things, but he's kind of just stayed the course. He goes out tonight in kind of an emergency, didn't think he was going to be pitching Friday night, and he gives us seven innings and strikes out eight."

Beaulac's pitching and his team's offensive support led the Phoenix to its 14-3 victory.

While any win in Colonial Athletic Association play is obviously important, the Phoenix's win against the Seahawks was critical.

College of Charleston and UNCW currently rest comfortably in the top spots in the CAA standings. Elon, on the other hand, has a narrow lead over No. 4 Northeastern and a one-game lead over William & Mary. If the regular season were to end today, Delaware would claim the sixth and final spot with a 5-8 CAA record.

Since the top two seeds get a bye from the first round of the CAA Tournament and Elon lost two of three games at William & Mary earlier this season, the No. 3 seed would provide the Phoenix with a big advantage. It would allow the team to play a much easier opponent on paper.

But the CAA Tournament is not the baseball team's current focus. Elon's management urges players to control their own destiny by winning the next game and not looking too far ahead.

The Phoenix are scheduled to host UNCW for the second game of its three-game series Saturday at 1 p.m. The contest was previously scheduled later in the afternoon but was bumped up after reports of rain in the early afternoon.