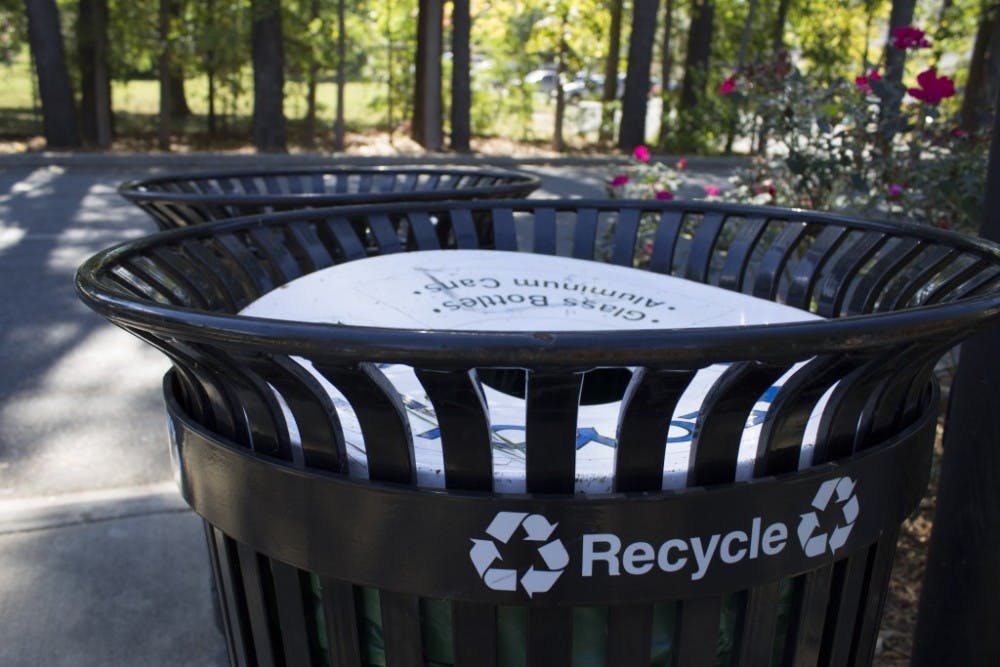 Whether students take car pools or use reusable water bottles, they belong to a nation using nearly one-fourth of the world’s natural resources. The overlooked key to a greener future: linking social justice and sustainability.

Julian Agyeman, a professor of urban and environmental policy and planning at Tufts University who coined the concept ‘just sustainabilities,’ visited Elon University’s LaRose Digital Theatre Feb. 24 to argue sustainability is about so much more than the environment — it’s also about human equality.

“Wherever environmental degradation is happening in the world, I defy you to find a place where it’s not about social injustice,” Agyeman said to a large group of Elon students.

According to Agyeman’s website, just sustainabilities can be defined as “the need to ensure a better quality of life for all, now and into the future, in a just and equitable manner, whilst living within the limits of supporting ecosystems.” After introducing this concept, Agyeman expressed his frustration with how the sustainability agenda is construed around green issues.

Before coming to Elon, Agyeman examined the mission statements of some sustainability organizations on campus. He concluded many organizations focus on addressing the environment or social responsibility, but there are no coalitions formed between the different groups.

“I’ve noticed on this campus that we have a lot of student organizations that do have a mission that is to promote certain sustainable-related issues,” Temlak said. “We have all these great organizations that all tie into sustainability, but currently, we’re not doing that great working together.”

For example, one portion of the Sierra Club’s mission is to “practice and promote the responsible use of earth’s ecosystems and resources.”

Similarly, the Eco-Reps Program is “dedicated to promoting sustainability and environmentally responsible behaviors. This program raises awareness of sustainability-related programs by working with Residence Life and Greek Life and delivers lessons to Elon 101 and COR 110 courses as requested.

Collaborations between these organizations could help promote the idea of just sustainabilities, according to Agyeman.

Agyeman listed off five themes to what just sustainability should look like in practice: environmental space and fair share, well-being and happiness, urban agriculture and food justice, planning for intercultural societies and spatial justice.

Data from the CIA shows the United States has the world’s largest coal reserve and accounts for 27 percent of the world’s total. An article from 24/7 Wall Street, a Delaware corporation that runs a financial news and opinion company with content delivered over the Internet, named the United States the second-richest country in the world in terms of resources — Russia ranked first. Other wealthy countries include Australia, China and Canada.

Because of this disparity in available natural resources between wealthier, more powerful nations and poorer ones, Agyeman advocated for a more equitable allocation of resources. He also said government cannot be trusted to make cutbacks for the greater good of other nations.

“Do you envision American government policymakers cutting back on our nation’s resources within the near future?” Agyeman asked. “If not, who has to be accountable for lowering that 25-5 percent gap?”

While he was specifically skeptical of the federal government, he noted there is hope for local governments to bring change.

Budget cuts have become increasingly prevalent in counties throughout the United States. Alamance County is no exception.

The county’s Planning Department site says it oversees a number of community activities ranging from water and sewer projects to land development in rural Alamance County. As the planning department’s director, Libby Hodges has witnessed a sharp decline in her department’s activities because of recent budget cuts.

“Most of the funding that we’ve gotten from the past has come from state or federal,” Hodges said. “[Securing those funds nowadays] requires someone from our department applying for the funds, and we don’t have the staff to apply or manage the funds once they’re in place.”

Despite this problem, departments try to remain optimistic about their existing sustainability efforts.

“A lot of the municipalities and colleges and universities are trying to do more with water control,” said Phil Ross, head of the Soil and Water Conversation department.

Ross also points to the county’s recycling program as another step in the right direction.

“Greg Thomas [the county’s solid waste director] has an excellent recycling program through the landfills,” Ross said. “That would be one thing we’re doing well in Alamance County.”

But Agyeman said that while these efforts promote sustainability, they do little to address social justice.

Agyeman is a firm supporter of buying fresh local food, but encourages students to stray away from their traditional definition of local.

At Elon’s farmers market on North Williamson Avenue, local farmers cater to members of the Elon community. But members of the Elon community come from a variety of backgrounds. More than 80 percent of Elon students live out of state. Because students come from a wide range of geographic regions, local food may refer to food from their hometown rather than an Elon farmers market.

Within Alamance County itself, residents have different cultural roots. According to data from the 2013 census, 19.3 percent of county residents are black or African-American while 11.8 percent are Hispanic or Latino. To define what is local, Agyeman urges farmers to consider the diversity within the community and make products for minority groups as well.

When stringing together his final thoughts, Agyemen challenged students to expand their minds beyond conventional scientific research.

“We have the science of sustainability, we know what we need to do, but we’re not doing it,” he said. “This is where social science [psychology, sociology, anthropology] comes in.”

Agyeman concluded his speech by urging those in attendance to critically examine how to promote both environmental justice and social justice.

Improving parks as an attractive option for people to congregate, constructing streets for people to talk rather than roads for drivers, bringing more diversity into the work force and promoting human potential through a better educational system were among the many ideas he hoped would generate future discussion on campus.