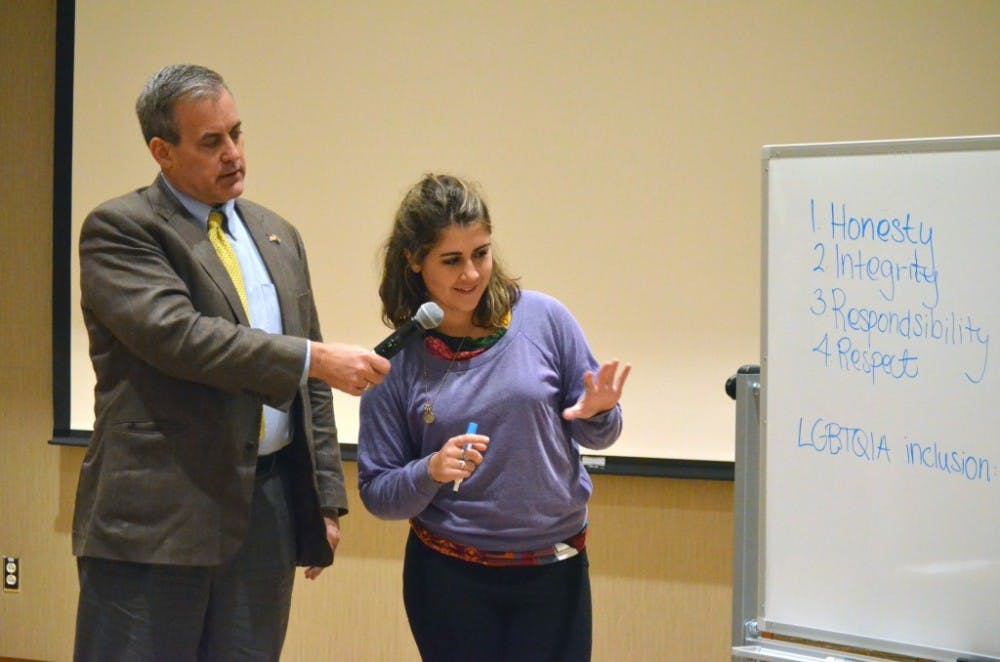 In order to increase discussion about LGBTQIA Christians, the Truitt Center brought two religious leaders that identify as gay and lesbian to Elon University to lead an conversation, “Intersecting Identities: Faith, Gender and Sexuality.”

“No matter our group or no matter our theology, we all have students who are struggling with their sexuality,” said Joel Harter, associate chaplain for Protestant life at Elon. “I just want to provide our community with an opportunity to interact with people who are gay and Christian.”

Jan Fuller, university chaplain, said it’s important to realize there are many facets of Christianity. Each person’s faith may manifest itself in different ways.

The planning of the event began in November 2014, shortly after some of Elon’s religious leaders attended an interfaith and community service conference in October.

At the conference, Kane and Cadwallader were panelists for a workshop focusing on LGBTQIA topics and multifaith work.

Harter decided after the workshop that he wanted to bring Kane and Cadwallader to Elon.

“They did a good presentation on what it’s like to have these intersecting identities,” Harter said. “I think that’s something we’re still learning how to talk about at Elon.”

March 5, Kane and Cadwallader engaged in an open discussion about their personal experiences with their intersecting identities and how Elon’s core values can promote inclusivity of LGBTQIA Christians.

Kane said the same was true for his sexual orientation.

“It’s very interesting to think about the identities we bring, the minority and majority ones,” Kane said.

Cadwallader thinks about identity by accepting a progressive approach to the Bible. To her, the Bible should be read by looking at the big picture, rather than in individual segments.

“The Bible, depending on traditions, can be wielded as a weapon or a sacred text,” Cadwallader said.

To illustrate her point, Cadwallader referenced the book “To Kill a Mockingbird.” Now, if she had just read the two sentences out of the book describing the mob that attempts to kill Tom Robinson, she would have thought the purpose of the book was different from actuality.

This is her approach to looking at Scripture, too. She noted that verses from Leviticus should be put into context in relation to the rest of the Bible.

“That, for me, is how I need to go back and realize that I’m reading this particular piece of Scripture as a part of a whole,” she said.

Different views about accepting LGBTQIA Christians were also addressed. Cadwallader shared how her partner comes from a traditional background. Her partner’s family strives to be accepting and to not discriminate while also holding onto some “level of theology.”

According to Cadwallader, it is not possible for the two to coexist.

Toward the end of the event, Fuller said Christians have many sexual orientations and there is support in the Truitt Center for those who identify as LGBTQIA.

“We aim to help all of us understand our spiritual commitments, and as they relate to other commitments and identities,” Fuller said. “Can Christians also be gay, lesbian, bi, or queer? Yes.”