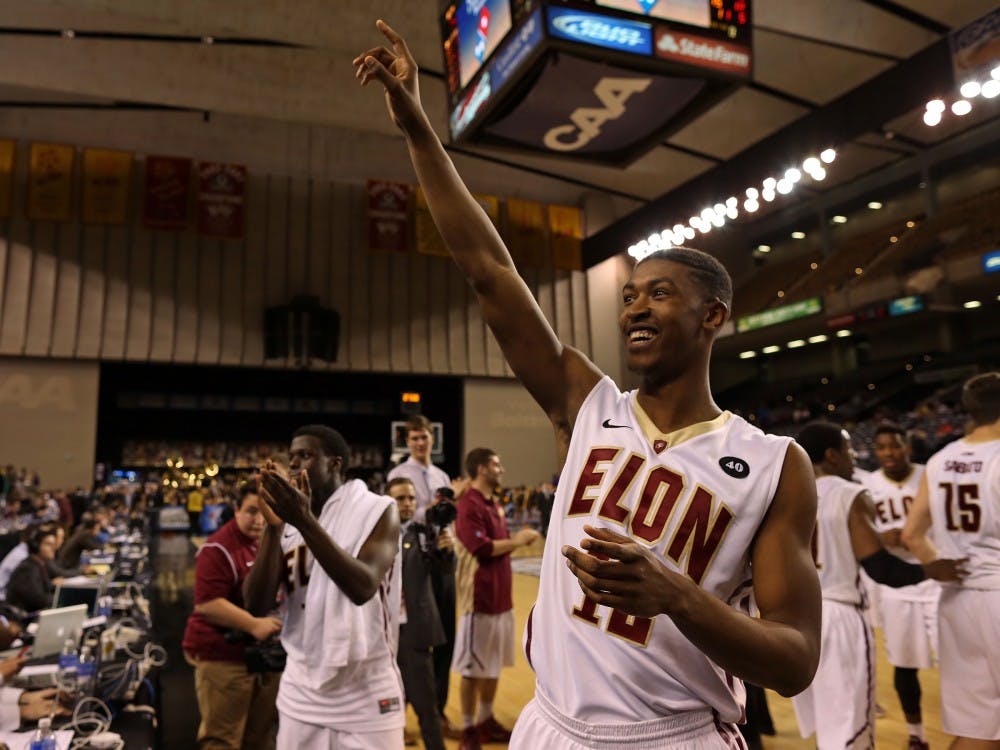 BALTIMORE -- The Elon University men's basketball team survived a late scare from Towson in the first round of the Colonial Athletic Association Tournament, escaping Royal Farms Arena with a 74-69 overtime victory on Friday night.

With two seconds left in regulation and the game knotted at 62 apiece, Elon senior guard Austin Hamilton launched an open jumper from the free throw line to win the game, but it fell just short, hitting the front of the rim, the backboard and teasing the Elon bench before it fell off the rim.

"It didn't go in, we wanted it to go in and avoid overtime, but that's just the way the ball falls sometimes," Hamilton said. "I'm a senior on this team, I'm a captain. I can't put my head down... Don't dwell on it and go onto the next play and that's what we did."

Following the quick intermission, the Phoenix relied on veteran leadership the rest of the way. Upperclassmen scored all 12 of Elon's overtime points en route to the school's first ever win in a CAA Tournament in any sport.

Junior Tanner Samson scored the first five points of the period and Austin Hamilton nailed a big triple to put Elon up six, 70-64 with 2:21 remaining. Towson guard Four McGlynn converted an and-one layup and the shot on the next possession to pull the Tigers within three, but that was as close as they got as Elon senior Kevin Blake stole the ball and threw down a thunderous dunk to put the game out of reach.

It was a back and forth battle throughout, with no team leading by more than six points at any time. Towson used a significant size advantage down low to outrebound Elon 44-26, but the Phoenix drained three after three to keep the Tigers at bay.

Elon was propelled by youth throughout most of the contest. CAA Rookie of the Year Elijah Bryant scored a game-high 21 points, and freshman Colin Luther scored 11 points three-of-three shooting. But it was veteran leadership from Blake, Samson and Hamilton, who's 12-point, seven-assist outing helped extend his college career by at least one game, that proved the third time was the charm for the Phoenix, which lost its first two match-ups with the Tigers this season.

With the win, eighth-seed Elon advances to play top-seed William and Mary and CAA Player of the Year Marcus Thornton in the quarterfinal's of the tournament on Saturday at noon. The pair have split games this year. The Phoenix beat the Tribe at Alumni Gym on Jan 9. and lost at Kaplan Arena on Feb. 11.