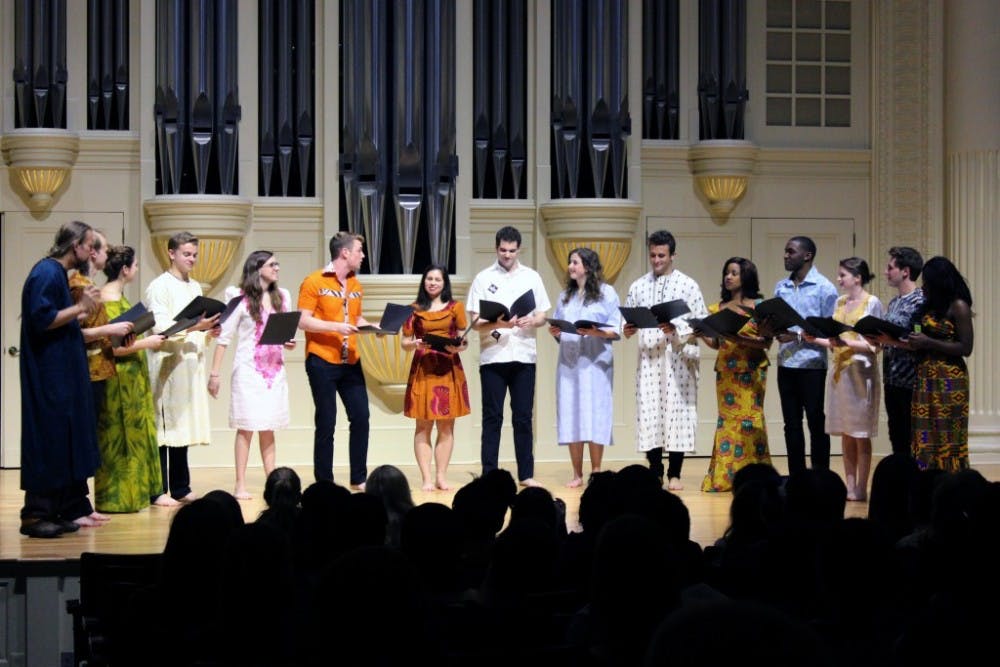 Students in the “Celebrating Black History Through Performance” performed a variety of music and dance Feb. 6 in Elon University’s Whitley Auditorium. The dance and vocal performance celebrated African American culture through the direction and choreography of Jason Aryeh, associate professor of dance.

To create a fun, welcoming atmosphere, hosts and members of the Elon African Society senior Omolayo Ojo and sophomore Kennedy Ojimadu began the show by walking onstage dancing, laughing and clapping. They set the tone for freshman Cassandra Tumasz and sophomore Abby Corrigan, who danced a duet titled “Welcome All” in bright yellow clothes.

After the duet, senior Yasmine Arrington took the stage. Before her performance, Arrington addressed the audience.

“Black history is very rich,” she said. “In all reality, there’s still a long way to go.”

With that introduction, she read the spoken word poem “A Black Prayer” over a soft drumbeat.

Senior Danielle Biggs followed Arrington with a solo dance performance titled “Alone But Strong.” Biggs reflected the song’s title with her movements as she glided across the floor.

Following Biggs, senior Renee La Schiazza sang an a cappella rendition of “Amazing Grace/Say a Prayer.” The audience listened to her performance in complete silence, captivated by her soothing voice. La Schiazza’s moving solo served as a smooth transition between dance performances, and it brought a new dimension to the event.

The next dance routine matched the grace of Biggs’ performance but added an element of power. The first dancer of “Sea of Skeptics” walked on stage without music and began her routine as the remaining dancers entered one by one. Music reminiscent of traditional African rhythms filled the room as the dancers performed with intensity and power.

A dance solo choreographed and performed by senior Sophie McNeill followed in the same tone as the group dance performance. McNeill’s expression was intense, and her movements evoked the strength of the song, which was titled, “We Are All Human.”

Next, Aryeh’s West African Dance class performed a short, upbeat number. The group of about 12 dancers moved with energy, bringing a lighter tone to the auditorium as they showed off their classwork.

After Aryeh’s class, a group of vocal students sang “Baba Yetu,” a translation of the Lord’s Prayer in Swahili. They stood in a semi-circle and wore an array of traditional African clothes representing different regions as they sang the uplifting song in unison.

In a change of pace, junior Dorian McCorey came onstage to sing “Colored Woman” from the musical “Memphis.” It was a powerful ballad that she executed beautifully. This song speaks of the discrimination and hardships women face, and the strength in McCorey’s voice demonstrated the power that all performances that night aimed to showcase.

The show ended with “Drum Dance,” a performance of six girls dancing and playing drums. The performers first came through the audience, chanting and banging their drumsticks together to begin their performance. The piece ended the night with high energy and a pleased crowd.

All of the performers involved in “Celebrating Black History Through Performance” showed off their talents as they executed each performance with passion, emotion and advanced technique. The evening’s performance was an engaging and entertaining display of culture that dazzled and engaged the audience.

This event was a part of the month-long celebration of Black History Month. For more events and activities on campus throughout February, view the link below for more information: