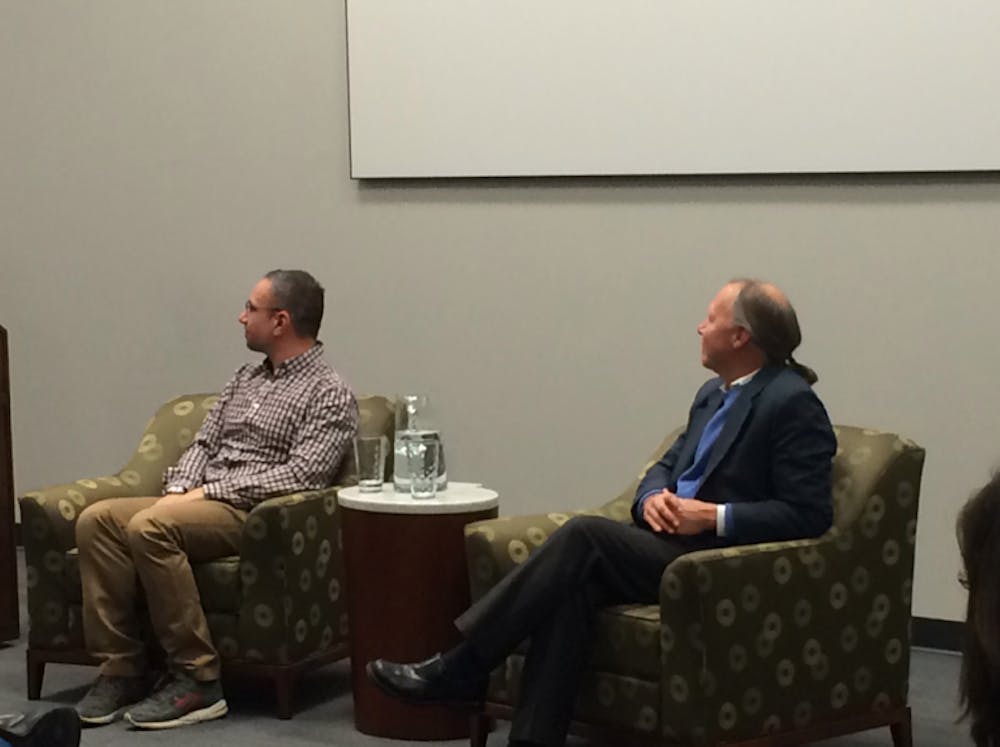 Michel Bondurand (left) takes questions from those in attendance after giving his lecture. Photo by Bryan Anderson, assistant news editor.

Michel Bondurand, who was born into a Muslim family, emphasized the need for French citizens and the world as a whole to better understand the Muslim culture.

“We imagine that Muslim people are the same everywhere,” Bondurand said at the beginning of his lecture. “French people don’t have a proper idea of how Muslims live in France.”

One of the main causes for this lack of understanding stems from an absence of critical information. According to Bondurand, it is forbidden in France to ask people their religion. This makes it difficult to gather reliable statistics on the population of French Muslims. However, he estimated that 8-10 percent of the France population is Muslim. In comparison, about one percent of United States citizens practice Islam.

One stereotype he addressed was the perception that Muslims are terrorists. When he brought up this stereotype, he noted that the proportion of Muslims who practice Islamic fundamentalism, which is commonly referred to as “Radical Islam,” is significantly low.

Since most Muslims in France are not extremists, he believes that global citizens must educate themselves on different cultures in order to prevent the spread of stereotypes. But seeking out further information on Muslim culture has become more challenging because of the French educational system.

According to Bondurand, there is a decreasing number of professors permitted to teach Arabic in France. As a result, young Muslims have become less able to educate themselves on their own religion.

“For the past four years, there are no possibilities to become an Arabic teacher,” he said.

Bondurand concluded the lecture portion of the event with a personal anecdote that occurred four days after the Charlie Hebdo terrorist attack in Paris. After stepping into a taxi cab, he noticed that his Muslim driver had a beard.

‘Must be a difficult time to drive a cab in a beard,’ Bondurand thought.

While speaking with the driver, it became clear the driver had little understanding of the Quran, the religious text of Islam. Though Bondurand was frustrated with the driver’s lack of knowledge on his own religion, he exited the cab with a greater appreciation for education.

“Education is key,” he said. “For France, it’s critical. There is a large part of our population that has an identity crisis"