Law school enrollment on the decline 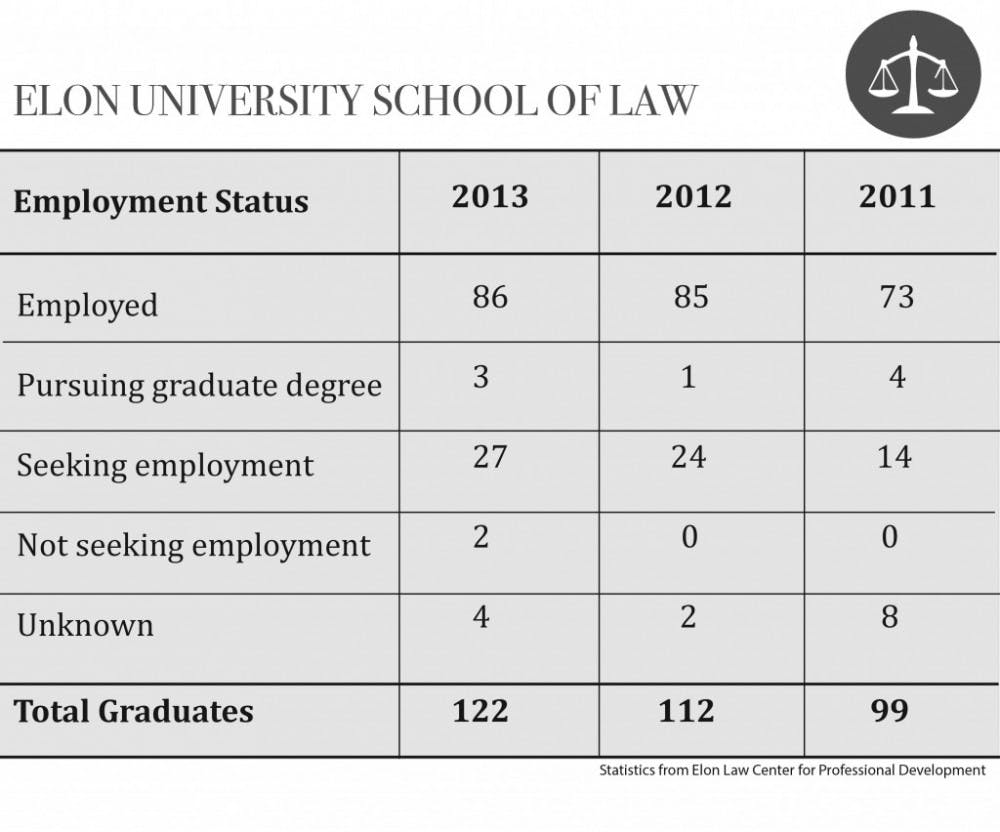 Since Elon University School of Law was founded in 2006, national tuition has, with few exceptions, been on the rise while employment prospects have been on the decline.

To combat these issues, Elon is making an effort to distance itself from some of tried-and-true manners in which law has been taught for generations.

“The school’s early years were characterized with differences in the curriculum from a traditional law school,” said Luke Bierman, dean of Elon Law. “The school is recognized for being innovative. That allowed us to take a more thoughtful and bold change to the curriculum.”

According to Elon Law’s Center for Professional Development’s Employment and Bar Exam Passage Statistics page, the unemployment rate has increased throughout the past three years.

While nearly 1-in-4 2013 graduates were unemployed nine months after graduating, Elon’s five-year employment rate is around 90 percent, according to Bierman.

Some of the institution’s more distinguishing features include an externship requirement, a shortened take on the internship, as well as a two-and-a-half year program to earn a Juris Doctor (J.D.) degree.

According to the U.S. News and World Report, some of the best law schools are Yale, Harvard, Stanford and Columbia. It takes three years to get a J.D. at each of these institutions. Annual tuition and fees at these four schools range from $52,530 to $57,838.

Michael Rich, an associate professor of law at Elon University School of Law, said the school is more creative than some of the more traditional law schools.

“I think that the pressure that’s being put right now on law schools has forced us to innovate and think more creatively about who we are and what we do,” Rich said.

Since the university will offer a two-and-a-half year program in fall 2015, its tuition is more reasonable compared to the more traditional law schools. Next school year, the new program’s cost is set to decrease by nearly $14,000, for a $100,000 total.

The new program, which will run on a seven-trimester curriculum, allows students to graduate in December and take the February bar exam.

Perhaps due to the shortened time for classes, the program remains time-consuming and intensive for students.

Danielle Prongay, a first-year Elon Law student, is constantly reading for her classes to perform her best.

“The culture at [Elon Law] is hard work,” Prongay said. “If you put the hard work in, any opportunity is possible.”

Those who do study hard remain confronted by a major problem after graduation: unemployment.

According to the American Bar Association, the national unemployment rate for law school graduates has increased, but has a lower overall rate than Elon.

In its 2013 law graduate employment data, the ABA recorded the employment statuses of over 97 percent of graduates from the classes of 2012 and 2013 nine months after graduation.

Just over 10 percent of recent graduates from 2012 and 2013 were unemployed and seeking employment. Elon’s unemployment rate is nearly twice that. The national unemployment rate across all job sectors was 5.6 percent at the end of the fourth quarter in December.

The decrease in available jobs in the law profession has caused a decrease in national enrollment.

Ed Lanquist, an attorney who practices patent, trademark and copyright litigation, believes pursuing law is still worth the expense — as long as would-be graduates can distinguish themselves from their peers.

“I think it [a law degree] is still worth the investment, but you have to have a degree that stands out,” Lanquist said.

Banking on the non-traditional standards Elon Law has in place, Prongay thinks her school’s differences will help her resume stand out from the pile. But she’s already considering other career options.

“The J.D., even more than having a bachelor’s degree, can be used universally,” Prongay said. “I was a political science major. My J.D. qualifies me as a business person, a teacher, a lawyer or a guidance counselor for a school.”

Rich directly entered law school after getting his degree as an undergrad and believes now is a good time to enroll as long as students recognize what they want.

“I think that a law degree is a worthwhile investment for students that have a goal,” Rich said. “I don’t know if it’s good for students trying to figure things out. It’s almost too intense to provide that time to decide what you want to be when you grow up.”