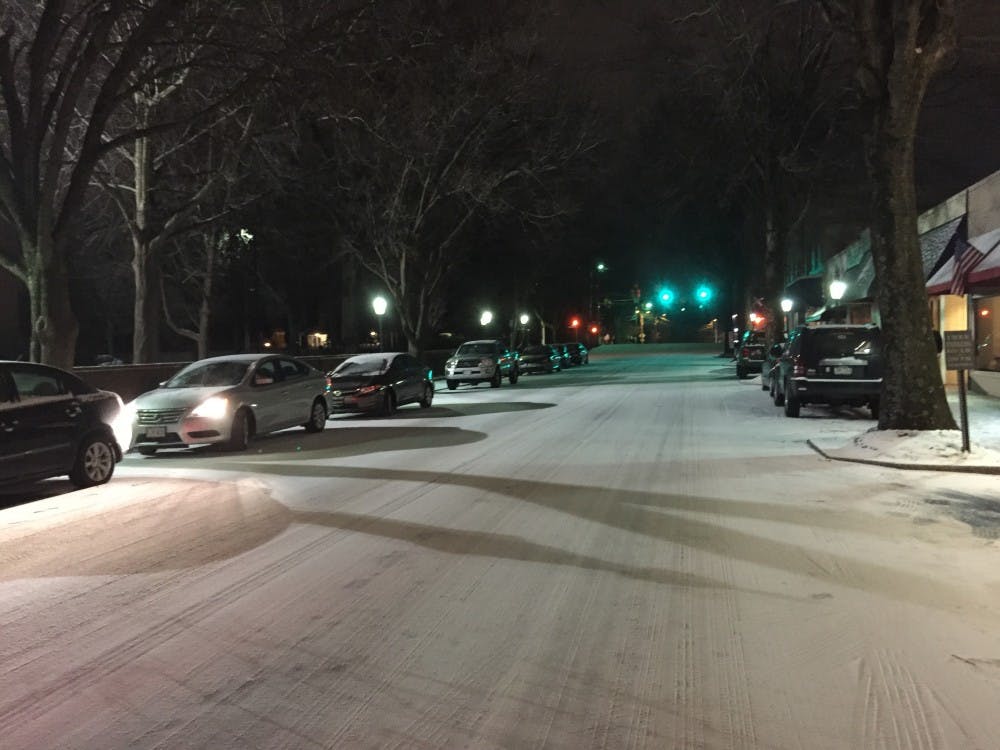 Elon University's Physical Plant got off to a late start in preparing for this round of winter weather. Since Physical Plant's workers were not here over the weekend they didn't start preparing their equipment until Monday, said Matt Kirkman, Lead Groundskeeper for Physical Plant.

According to Tom Flood, Associate Director of Physical Plant, since snow is not a regular occurrence in Elon, the university does not allocate a specific amount of money to a snow and ice budget. Instead, they convert some of their normal gear into snow and ice equipment. They attach salt spreaders to their carts and snow brushes to their lawn mowers. Chains are also wrapped around wheels to give them more traction.

Kirkman said there will be approximately 25 pieces of equipment being used by Physical Plant to clean up campus. He said that the ice storm from last year has helped in preparing his team for this storm.

"We've got a little bit more equipment from the storm last year. We've got the same crew so eveyrbody kind of knows what's going to happen and when you know, it makes it a lot easier when everybody is on board and knows the process," Kirkman said.

The storm means at least an additional four hours to every Physical Plant worker's work day. Workers will be on two 12 hour shifts, Flood said.

"We will have a good time because we have a handful of people that love to joke and play around," Kirkman said. "They really do help keep the moral up. And you know when your laughing and having a good time it makes it a lot better."

Dr. Steven House, Provost of Elon University is the one who decides whether or not there will be school.

"You know you have power when you are the guy that gets to determine whether classes should be running or not," House said.

He told ELN he plans to go outside around 5:30 tomorrow morning to check road conditions, then will consult with other university officials before making a decision about canceling school.

While that may mean more work for Physical Plant workers, the students motivate them.

"A lot of them are very nice and say thank you when they're walking by. That goes a long ways for us, just knowing that we're doing something to keep people safe is a big part of it too," Kirkman said.

Kirkman said more ice would be a worst case scenario. Flood said he would rather Elon get 8 inches of snow instead of an eighth of an inch of ice. According to Kirkman, the lawn mowers with snow brushes work well when there are a couple of inches of snow on the ground with ice on top of that. However, they are less effective with more ice.