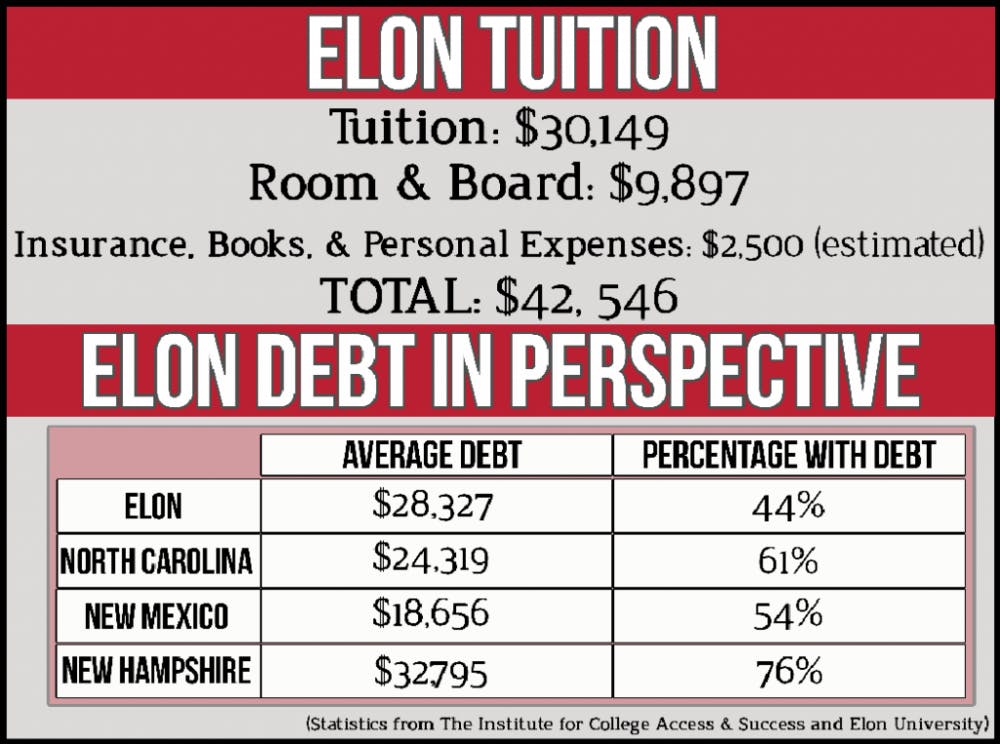 Christina Lewis was a naive New Jersey high-schooler searching for colleges in North Carolina that had a yearbook staff and a strong education program. After deciding she would attend Elon University and decline a full scholarship from another college, a large cloud of debt followed her wherever she event.

Lewis wishes she could go back in time to stop that 18-year-old high-school graduate from going to Elon. Now, the senior faces the prospect of graduating with $100,000 in debt.

“I’m stressed out all the time about money,” Lewis said. “There’s never a time where I can just drive somewhere and not think that I’m spending $3 worth of gas right now.”

Like thousands of other loan-heavy college students across the country, Lewis’ chances of timely repayment seem slimmer each day.

According to the Institute for College Access and Success, 69 percent of 2013 graduating seniors at public and private nonprofit colleges had student loans. The borrowers averaged more than $28,000 in federal and private loans.

In keeping with the national average, almost half — 44 percent — of Elon graduates left with an average of $28,327 in debt that year.

The Consumer Financial Protection Bureau reported that by August 2013, the national student loan debt crossed the $1.2 trillion mark, $1 trillion of which came from federal loans.

Lewis is among the one percent of graduates categorized as “crippling,” or at least $100,000. In an effort to bring that number down, she said she has sacrificed her grades and social life to multiple jobs.

“I’ve had a job since freshman year,” Lewis said. “At one point, I had two jobs. My grades did suffer because of it.”

She did not understand what starting school with $30,000 in debt meant when she arrived at Elon.

Patrick Murphy, director of financial planning, said the university is limited in its ability to provide more financial support to incoming students. The two major ways to provide need-based aid are raising tuition and raising funding.

“The creation of more financial aid [is a major priority for the university],” Murphy said. “The way Elon is going about it is through fundraising. I don’t really consider raising tuition a good way to increase financial aid.”

One common perception of doubling need-based aid is everyone who has a grant will see the value of his or her specific grant double. But that assumption is not right.

Students selected to join the Watson and Odyssey Scholars Program, for example, receive a number of endowed scholarships. In general, recipients include students who are the first members of their family to go to college, will bring cultural or socioeconomic diversity to campus and have overcome obstacles in order to achieve success.

While the program has helped decrease or eliminate student debt for high-need applicants, only 24 students receive these scholarships – 14 Watson Scholars and 10 Odyssey Scholars. Most of the 24 scholarships are awarded annually, but not all.

According to Murphy, about 55 percent of the entire student body applies for need-based aid, but only 36-37 percent of the total student population — 2,300 eligible students — are qualified to receive it.

Although Lewis believes that her education has prepared her well, her debt has limited her ability to enjoy free time.

“Elon has me so well prepared, and I’ll be fine if I go into the job force, but [the debt] has limited me from being that care-free 20-year-old,” Lewis said.

The price of an education

In a recent study conducted by The Hamilton Project, an economic policy initiative at the Brookings Institution, researchers found that a college degree in any major is important for advancing a student’s earnings potential.

“While it’s true, of course, that the cost of higher education is high and continuing to climb annually, a multitude of evidence continues to support the inherent value of a college degree,” Vecchione said.

Despite the value of a college degree, higher tuition rates have made it more difficult for students to attend certain top universities. Data from the National Education Center for Statistics indicates a constant increase in total tuition among private and public institutions. And since tuition is increasing, more students are taking out loans.

In order to combat the rising problem of post-graduate student debt, Vecchione advises families to invest in college savings plans when their prospective college student is young.

“529 plans let your savings grow tax-free, and the earnings escape federal tax completely if the withdrawals are used for qualified college expenses, including tuition, fees and room and board,” Vecchione said. “Some states offer pre-paid tuition plans for in-state residents at that states public colleges.”