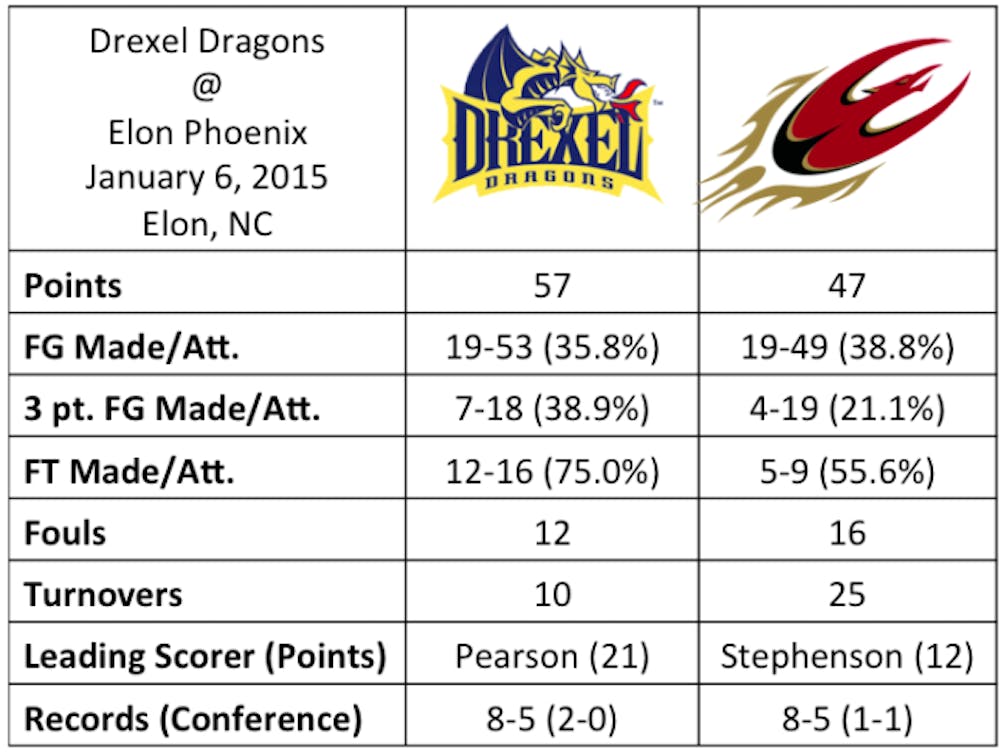 The Elon University women’s basketball team arrived to Alumni Gym Tuesday, Jan. 6 eager to host its first Colonial Athletic Association game. However, a combination of turnovers and lack of offense propelled the Phoenix to a 57-47 loss to the Drexel University.

“The offensive struggles were just trying to score too early in the offense and not reversing the ball enough,” coach Charlotte Smith said. “I think we settled for shots when there were opportunities to penetrate.”

Senior guard Zora Stephenson has led the Phoenix offensively throughout the course of the season. However, a disciplined Drexel defense made it difficult for her to get quality scoring opportunities early on. In the first half, she settled for three points after making a three-pointer with 1:49 remaining.

While Elon tried to overcome offensive lapses, they encountered an obstacle when trying to defend junior guard Rachel Pearson. During the opening half, Pearson went 4-for-6 from field goal range and 3-for-4 from beyond the arc to get 13 points. By the end of the night, Pearson scored 21 points.

Although the Phoenix found it difficult to prevent Pearson from scoring, the squad’s defense kept them in the game. Elon allowed just 27 points by halftime to enter the locker room behind 27-18.

Despite the team’s resiliency, the players found themselves down 40-23 with 12:40 left in the game. Like the first half, Elon’s defense limited the damage by out-rebounding Drexel 23-12.

“We rebounded the ball well,” Smith said. “We had 42 rebounds, so that’s a good thing.”

As the game progressed, Stephenson grew more comfortable. After hitting a clutch three, she narrowed the deficit to eight points with 2:52 remaining. She led the Phoenix with 12 points by the end of the game.

“I think it was me thinking less [that allowed me to score more in the second half],” Stephenson said. “We were in situations where we had stretches where we weren’t scoring, so that’s just me trying to help my team.”

However, with time as its biggest enemy, the Phoenix lost 57-47.

Going forward, Smith hopes that this game will serve as a learning experience and push her players to improve offensively.

One advantage Elon has is its strong nonconference schedule. Because of prior experience this season against tough opponents like NC State, Vanderbilt, and North Carolina, the Phoenix are more prepared to make a smooth transition from the Southern Conference to the CAA.

“Every game is important, but I felt like we’ve had a really strong nonconference schedule where we should go into the CAA prepared for whatever is thrown at us,” Smith said. “We’ve prepared ourselves; we just have to find a way to be consistent.”

With this loss, Elon’s record drops to 8-5 (1-1 CAA). The squad will look to quickly rebound from Tuesday’s loss in time for a road game against William & Mary University. Tip-off is scheduled for Friday, Jan. 9. at 7 p.m.