Elon pulls off near comeback at Towson, falls short 57-53 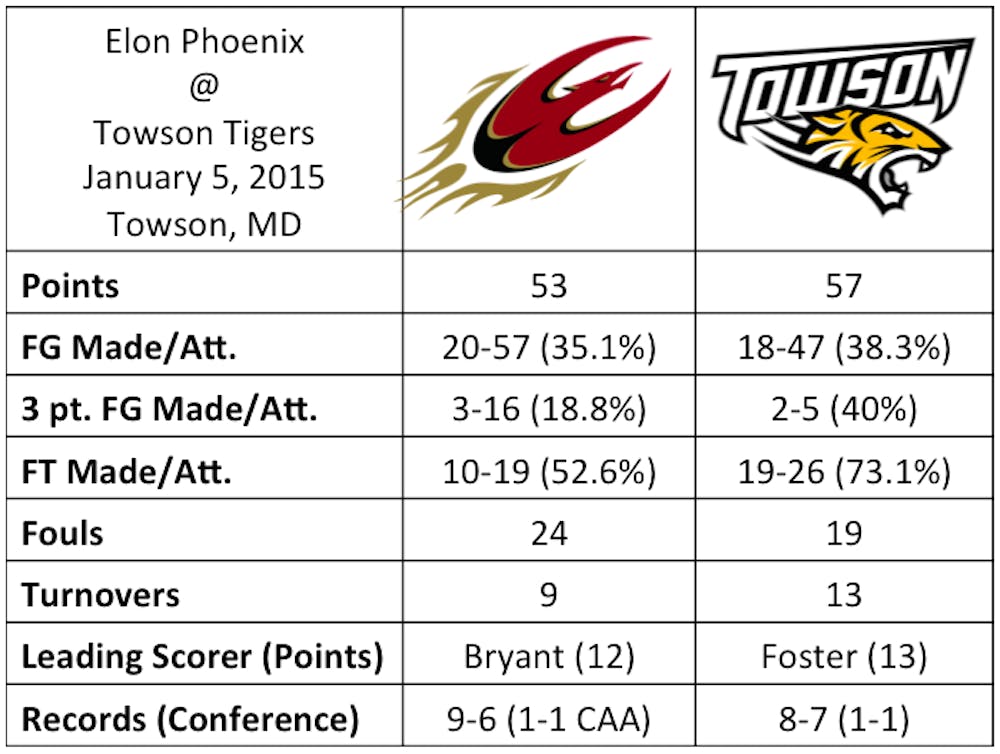 The Elon University men’s basketball squad traveled to Towson University on Monday, Jan. 5 in pursuit of a fourth consecutive victory. However, after early struggles on both ends of the court gave the team an 18-point deficit, the Phoenix lost 57-53.

In the early stages of the game, Elon’s offense was virtually obsolete. Despite trailing 26-8 with 8:03 remaining in the opening half, the Phoenix went on a 14-2 run to close out the half. What looked like an early blowout became anything but.

As the game progressed, Elon continued to chip away at the deficit. At the first media timeout of the second half, the Phoenix trailed 33-28. With 12:28 remaining in the game, junior guard Tanner Samson hit a three to give his team a 38-36 lead.

For the final 12 minutes, the Phoenix and the Tigers engaged themselves in a back and forth battle.

Although Elon was within a single possession in the waning minutes of the game, a pair of free throws from junior Tiger guard Four McGlynn gave Towson a 55-48 lead with 52 seconds left.

At the end of the night, the Phoenix lost 57-53 to snap its four-game winning streak and fall to 9-7 overall (1-1 Colonial Athletic Association).

The men’s basketball team will look to rebound from a tough road loss before returning to Alumni Gym on Thursday for its first-ever CAA home game.

Elon will make its CAA home debut against William & Mary University on Thursday, Jan. 8 at 8 p.m. After that, the Phoenix will host Hofstra University on Saturday, Jan. 10 at 8 p.m. and College of Charleston on Wednesday, Jan. 14 at 7 p.m.