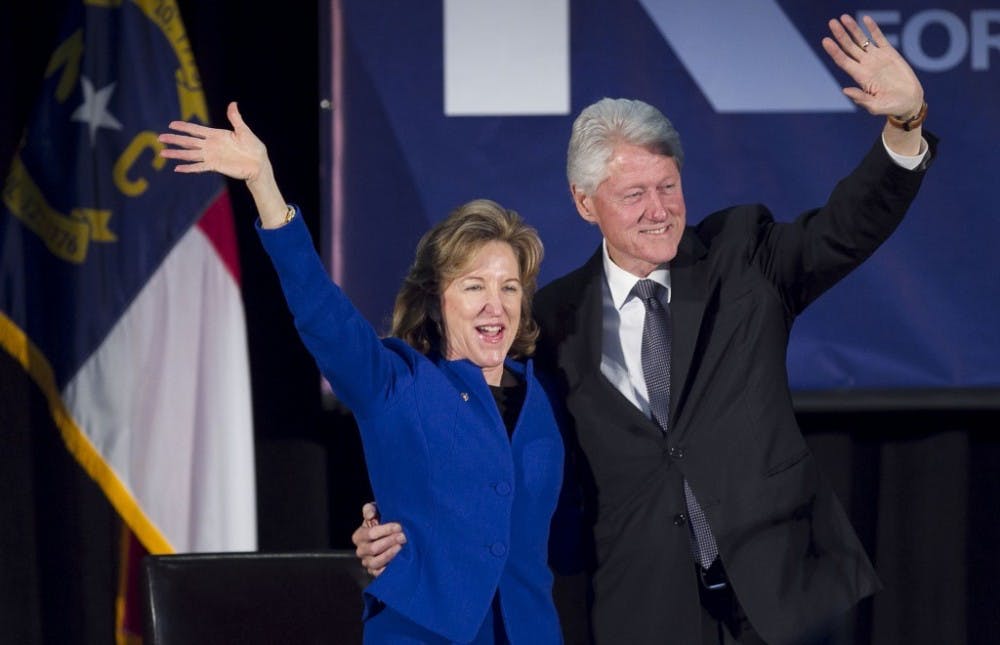 With midterm elections slated for Tuesday in North Carolina, the latest Elon University Poll shows incumbent Sen. Kay Hagan, D-N.C., ahead of her Republican challenger, Speaker Thom Tillis. But the lead is a slim one.

“The rule of thumb is, if you really want to be 95 percent confident about the outcome of an election, you need about a seven-point difference,” said Kenneth Fernandez, director of the Elon University Poll. “Right now we’re at a four-point difference.”

The Senate race has come down to a statistical tie that has tightened significantly over the year. Jason Husser, assistant director of the Elon Poll, said Tillis has been able to get better name recognition, which has improved his chances.

“He’s campaigning full-time now,” Husser said. “Over the summer, he had to split time between campaigning and working as Speaker of the House.”

As anyone in North Carolina who’s turned on a television or watched YouTube knows, campaign ads have showed up all over this fall. Tillis is the target of the most attack ads in the country at the moment, with Hagan the eighth-most attacked.

He added that negative ads have a strategic benefit for campaigns.

“Scholars say people remember negative things more. If you’re campaigning, you want to keep your name and your opponent’s name in the voter’s head,” he said. “You can say something positive about yourself, but that’s easier to spin.”

Fernandez said it’s possible that too many negative ads can lead to voter apathy, but he doesn’t think that’s going to be the case in this election.

“I would predict that turnout in this election will be higher than in the 2010 midterm because so much money is being spent,” he said.

Elections are unpredictable because big news items can interrupt established narratives, and the 2014 election is no different. Ebola, ISIS and same-sex marriage have been part of campaigns and debates across the country, so the Elon University Poll asked North Carolina voters how they feel about these topics.

One of the biggest surprises in the poll comes from an uptick in opposition to same-sex marriage, with 50 percent now opposed and only 39 percent supporting. Husser attributed this to the recent news from the Supreme Court that legalized same-sex marriage in North Carolina and the magistrates who resigned over it.

“I think that finding is a blip and we’re not seeing a long-term trend away from support for same-sex marriage, which we’ve seen growing statewide,” he said.

Husser said it’s possible that putting same-sex marriage back in the news will help Tillis by invigorating more voters to go to the polls, but when the latest poll asked voters what the most important issues were, “same-sex marriage did not come up at all.”

Instead, foreign affairs were important to both Hagan’s and Tillis’ supporters. When asked what the United States should do about ISIS, 43 percent of respondents said air strikes and ground troops should be utilized, while one-third said only air strikes.

Only 15 percent of respondents said no military action should be taken.

Fernandez said framing ISIS as a political issue should help Republicans, but not necessarily now.

“In the long run, it will help because ISIS and national defense questions draw away from women’s issues and education, which North Carolina republicans have not been doing well on,” he said.

In other issues, an outbreak of Ebola remains a concerns for many. A patient was admitted to Duke University Hosptal late Sunday night for suspected Ebola, but preliminary test results Monday were negative.

When asked how voters feel about the Affordable Care Act, 48 percent of respondents thought the law will make the health care situation in the state worse. Despite efforts to tie Hagan to the law, polls have her on top of the issue.

“In 2010, people were losing sleep over it. Not so much now,” Fernandez said. “And a lot of people are not voting for it to be repealed. They just want to modify it.”

Husser said the Supreme Court’s decision in the Hobby Lobby case — about whether a private company has to fund contraception — has also made the law more palatable for social conservatives, and there have not been any major issues with the law, such as issues of crashes and programming problems during the site’s initial launch in 2013.

Hagan saw a six-point drop in self-identified independents who say they are voting for her, according to the poll. But, Husser said, true Independents who do not lean either way are rare,

“If we cut it down to true Independents, Hagan is getting more,” he said. “But true Independents are usually not very sophisticated and have less political knowledge, so they’re unpredictable.”

The 2014 election is also the first election where some of the voting reforms go into effect in North Carolina. While photo I.D. will not be required until 2016, same-day registration is no longer an option.

“There is a considerable amount of data showing same-day registration gets a lot of votes, so that could really hurt turnout,” Fernandez said.

But Fernandez also said the summer’s Moral Mondays protests may also help turnout, as well as what appears to be a boost in early voting this year.

The midterm election between Hagan and Thillis is widely-regarded as the closest in the country. For North Carolina, the state’s future as either red or blue hangs very much in the balance of the results.