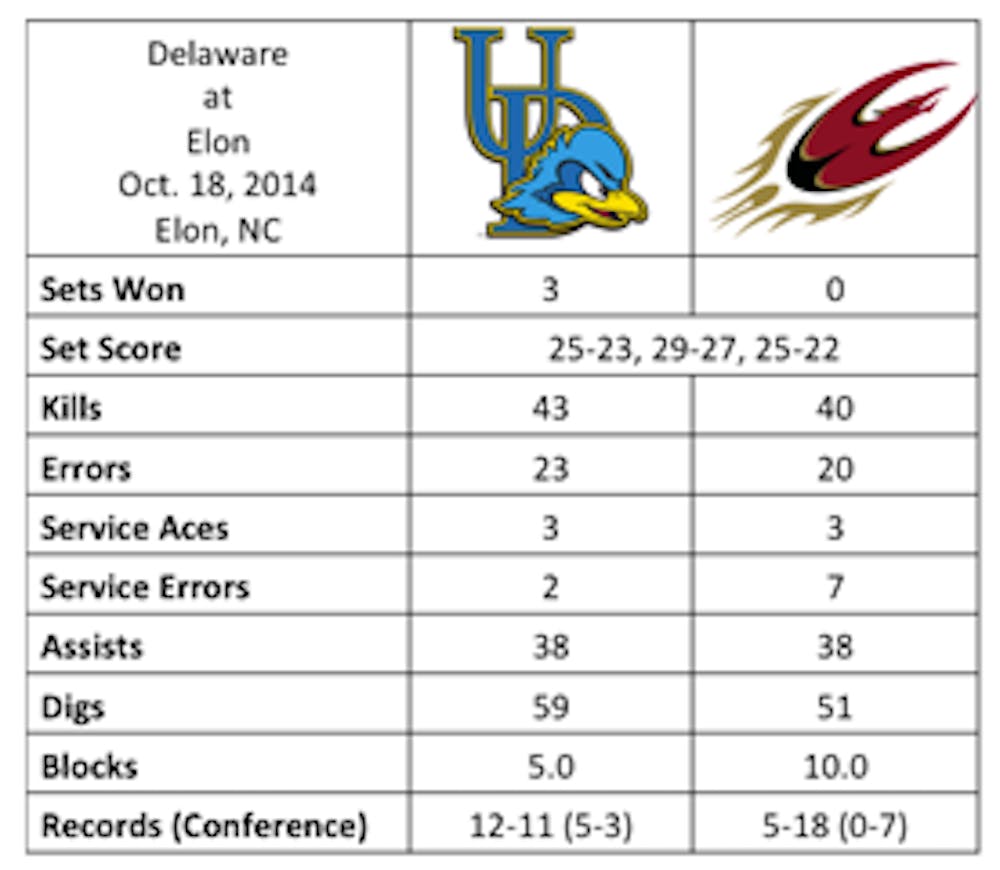 The Elon University volleyball team competed against the University of Delaware Blue Hens in search of its first win in Colonial Athletic Association play. Despite a tough effort in the opening sets, costly mistakes against a difficult opponent led them to a straight set (25-23, 29-27, 25-22) loss.

“We had the lead [in the middle of the first set and end of the second set], but we weren’t getting much rhythm in our game,” Elon coach Mary Tendler said. “We’re trying to be aggressive at the end of sets, but it seems like we’re more tentative, which allowed Delaware to make plays at the end.”

After trailing 9-8 in the opening set, the Phoenix scored six consecutive points. But after regrouping during a timeout, the Blue Hens fought back to tie the game at 20 and eventually win the set 25-23.

Because Elon lost a lead in the middle of the set, the Phoenix found it difficult to build momentum for the remainder of the game.

In the second set, the Phoenix got off to a rough start. Nearly half of Delaware’s first 10 points in the set came from Elon service errors. Despite these mistakes, the squad was able to make a comeback.

Perhaps the brightest star in the game was redshirt freshman setter Sydel Curry. Curry had five kills in seven attempts to finish the game with a .714 percentage and also contributed by making 30 assists.

Despite Curry’s effort, her team struggled to capitalize on opportunities. Although the Phoenix had a pair of set points at 25-24 and 27-26, the players couldn’t win the second set.

“As a team, we just didn’t stay tough,” Curry said. “I know we had a lot of long rallies during each set that we played and we didn’t win all the rallies because we didn’t stay mentally tough.”

After losing 25-22 in the final set, Elon’s record fell to 5-18 overall and 0-7 in the CAA. Although the Phoenix is in a new conference, Tendler insists that the challenging opponents are not the main problem.

“I feel like there’s a lot of teams [in our conference] that are similar,” Tendler said. “They’re all teams that we can beat if we play well. If we don’t play our best and execute really well, we’re going to be beat.”

Because of the Homecoming Ludacris concert, many students were unable to give the team its usual, loud home-court advantage. Nevertheless, the seats were filled with a strong parent and alumni network. While the loss to Delaware is disappointing, the team is happy to feel supported no matter what obstacles they may be facing.

“I think it’s awesome to see people support us even if we’re not winning, especially our parents,” freshman outside hitter Sydney Busa said. “Our parents are great; almost all of them were here tonight. It’s so awesome to have the support.”