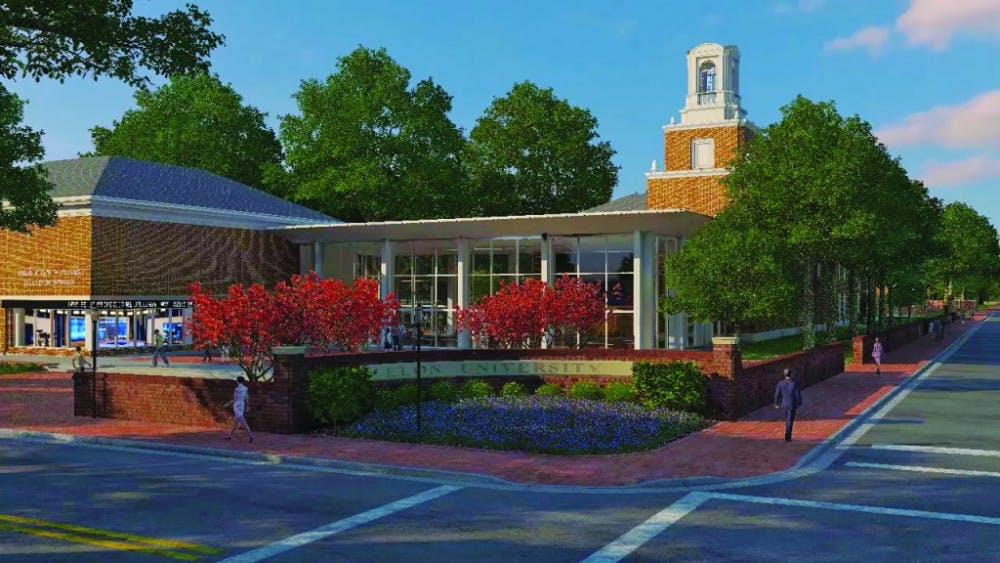 Broadcast news will get a new home inside the building, paid for in part by a donation by Brian Williams. Photo courtesy of Elon University Communications.

After 18 months of preparation and fundraising, Elon University has announced plans for the construction of additional buildings for the School of Communications to begin in early 2016. In doing so, President Leo Lambert hopes to cement the school’s reputation as a national powerhouse while fulfilling the increased student interest in this area of study.

Additionally, a new pavilion, which will face Whitley Auditorium, will house a media analytics lab and an Imagining the Internet center — the latter being one of the nation’s leading Internet think tanks.

Finally, Long Building will house the Interactive Media masters program as well as offices for the sport and event management department.

“The School of Communications is nationally recognized for innovation and engaged learning,” Parsons said during Friday afternoon’s on-campus campaign launch. “Our goal is to guide students to think, write, and produce meaningful information in a digital and global age.”

Although the majority of students currently enrolled at Elon will not be able to see the new facilities prior to graduation, the Class of 2018 will see the completed upgrades by senior year if the

construction campaign goes according to plan.

To first-year communications student Marissa Baum, the new facilities are just one example of the university’s commitment to expanding opportunities for students.

“One of the main reasons I chose Elon was for the School of Communications,” Baum said. “I’ve met so many amazing [alumni] and professors that are giving me tools to be the best I can be. As a freshman, I couldn’t ask for anything more.”

In the past year and a half, Elon has raised $8 million of the desired $15 million to fund the construction. Much of these funds came from the network of alumni.

Although neither Garrett nor Parker Turner graduated from Elon with a degree from the School of Communications, they wanted to support the campaign to construct the complex because it will help establish Elon’s reputation as an elite institution.

“President Lambert and the university said that this was the most important strategic initiative for the university,” Parker Turner said. “We do know that [the School of Communications] is Elon’s top program, so we want to see that national recognition continue to grow.”

By the end of 2015, Lambert hopes the university will reach its $15 million goal and begin construction in early 2016.

“Many donors will say, ‘What are your most important needs right now?,” Lambert said. “In 1998, we opened a science building and then we built a quadrangle for arts and sciences, the Academic Village, and then we opened the Francis Center, and we’ve just added some buildings for the performing arts. Now, it’s the School of Communications’ turn [to be expanded].”